WE NEED YOUR SIGNATURES: BABEL's Open Letter to the University of Toronto 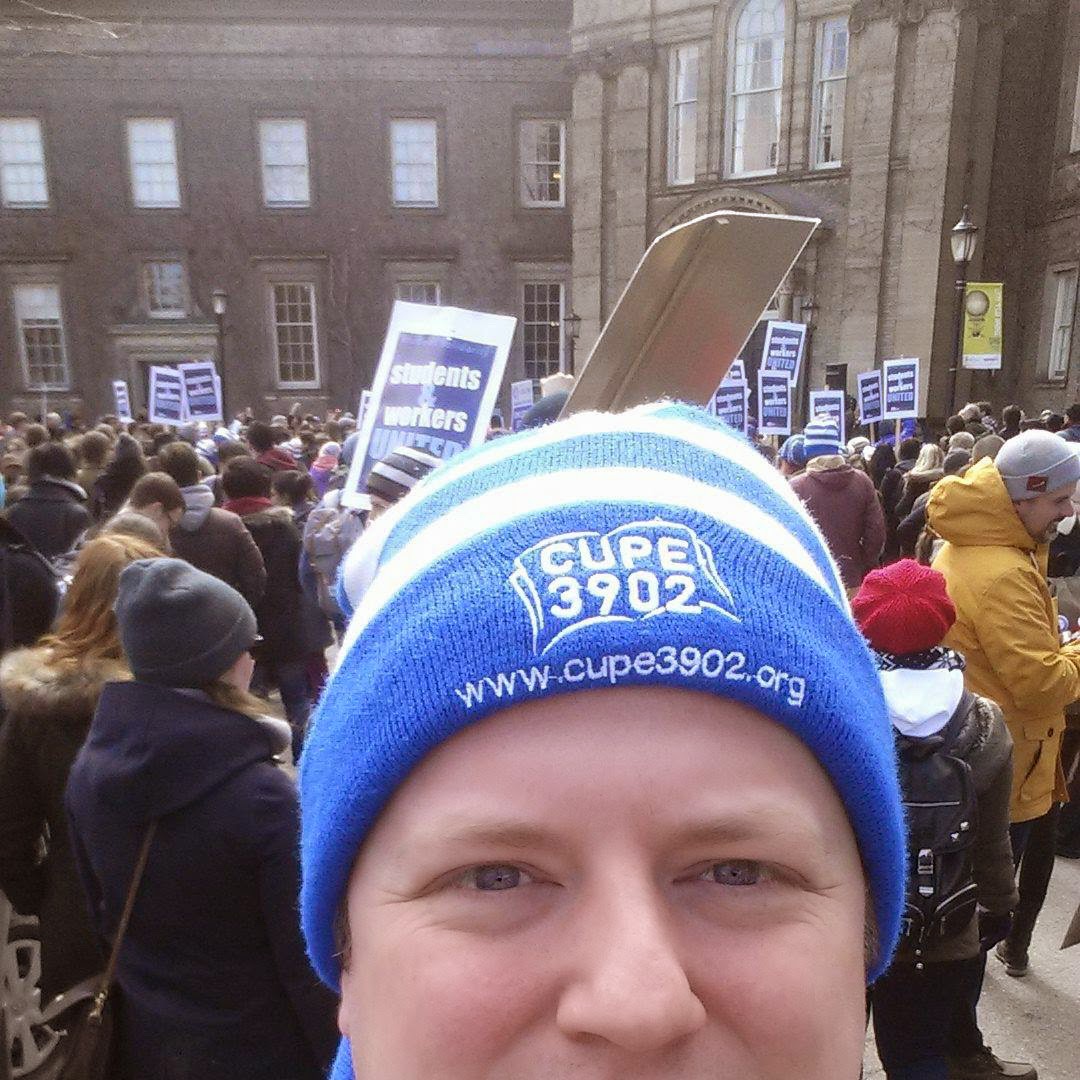 
BABEL Working Group Supports U of T Grad Students: Open Letter to the University of Toronto

*to sign, please email your name + affiliation to: babel.futures@gmail.com

For roughly three weeks now, graduate student teaching assistants, whom I prefer to call teachers, and other non-tenured instructional staff, who are also members of CUPE 3902 (the trade union that represents sessionals, TAs, and other contract instructional staff at the Univ. of Toronto, Victoria University and the University of St. Michael’s College) have been on strike at the University of Toronto, primarily because the average take-home pay for graduate students is well below the poverty line, and it has been for quite a while now, and also because other contract faculty make about 1/3 of what regular (tenure-stream) faculty make (and this with heavier workloads as well) and also don't have access to contracts other than on a "per term" basis, which makes their lives quite precarious. Healthcare issues are also involved, as are tuition waivers for graduate students. Although there is a tentative agreement that is being reviewed this afternoon by the union, word on the street is that no one is enthused about it (on the striking side). Why does any of this matter to me, and to the BABEL Working Group more largely? Because, quite frankly, "we are the University of Toronto's graduate students and adjunct faculty, we are CUPE 3902, and we are, all of us (whether professor or student, tenure-track or adjunct), the precariat." This is not their, but OUR, struggle. And it has been going on for quite some time now -- in other words, we have a long history at many fine institutions of higher learning of treating graduate student teachers and adjunct faculty as second-class citizens, and now they are the majority (inhabiting close to 70% of all teaching positions), and this at a time when the hiring of administrators has far outpaced the hiring of full-time, tenure-stream faculty (and enrollments!). Anyone who has been following the neoliberal takeover of the university for the past ten or so years knows full well the possible (and imminent) negative outcome(s) of such a state of affairs (just read, for example, Christopher Newfield's Unmaking the Public University, or Aranye Fradenburg's Staying Alive: A Survival Manual for the Liberal Arts, or Andrew McGettigan's The Great University Gamble: Money, Markets, and the Future of Higher Education). But I think two items culled from recent headlines relative to the current meeting of the University of California Regents sum it all up beautifully in a kind of miniature. First, in case you did not know it, Janet Napolitano, former head of the Office of Homeland Security, is now the President of the UC system (qualifications in higher education: zero) and she is pushing to raise tuition at UC schools, which has resulted in students protesting the Regents meeting. Yesterday, Napolitano was caught on mic saying to a fellow Regent, "Let's go. Let's go. We don't have to listen to this crap." And if you want to know what attending a public UC Regents meeting looks like, take a glance at this photo: 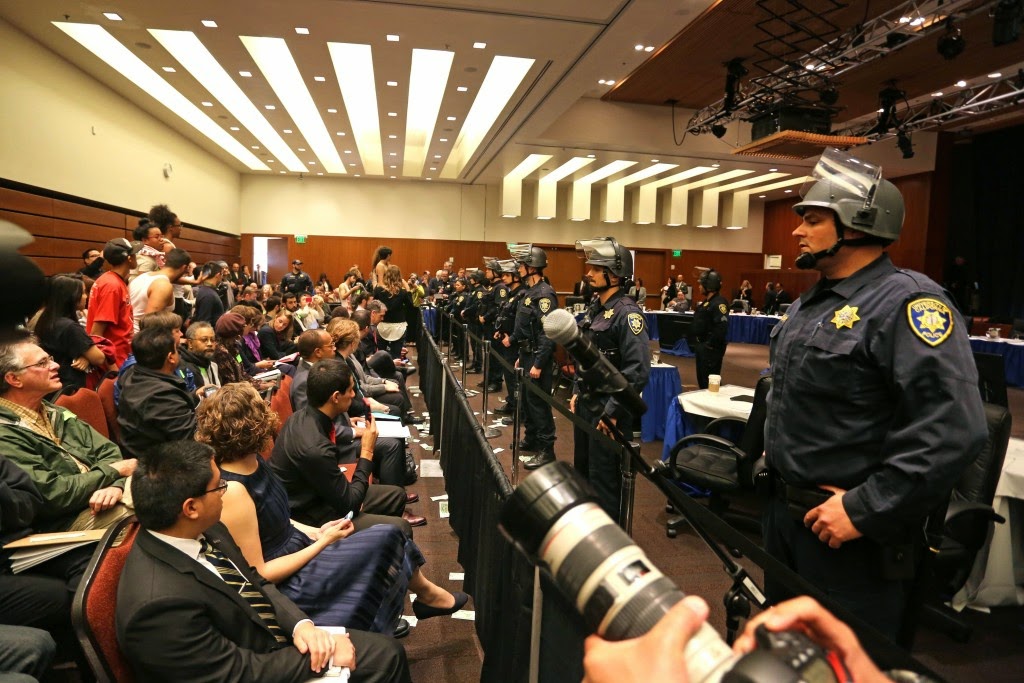 When BABEL held its 3rd biennial meeting at UC-Santa Barbara this past October, two of our featured speakers were the poets, adjunct faculty, and union organizers Robin Clarke and Josh Zelesnick, who are based in Pittsburgh and who have been noteworthy for helping to establish the Adjunct Faculty Association of the United Steelworkers Union which unionized adjunct faculty at Duquesne University. In their talk, they outlined the ways in which, at Duquesne, adjunct faculty organized themselves and agitated for change at Duquesne, which many of you may recall as the school made infamous by the undignified death of one of its former adjuncts, Margaret Mary Vojtko. I mention this here mainly to highlight how Robin and Josh concluded that talk. Josh shared that, when he was asked by regular TT faculty how they could aid the adjuncts' cause, he replied, "Organize yourselves." And why? Well, because if you represent tenure-track and tenured faculty, you are now the minority, and your ranks are shrinking. You are also the precariat, albeit it might not feel that way ... yet.

And thus we at BABEL feel that we have an obligation to stand beside the striking students and instructors at the University of Toronto, if even symbolically, but also with the force of our voices and pens. Those striking are not other to us, somewhere else rather than wherever we think "here" is. They are right beside us, and each one of them represents a person who is a member of this place we call a university-at-large. Indeed, the university could be said to belong to them now, and also to the students, who vastly outnumber everyone else. They deserve a living wage, they deserve healthcare, and they deserve an education they can afford. Isn't higher education a *right*? And isn't teaching a *job*? This situation belongs to all of us, and thus I ask that everyone consider adding their signature to BABEL's open letter to the University of Toronto by emailing your name and affiliation to: babel.futures@gmail.com. The full letter can be read here:


BABEL Working Group Supports U of T Grad Students: Open Letter to the University of Toronto