Teaching Medieval and Early Modern Cross-Cultural Encounters: The Pleasures and Perils of Research on Teaching

a guest post by Karina F. Attar and Lynn Shutters 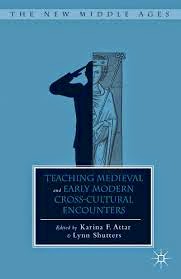 Many academic projects are born out of naïveté, a not knowing just how much work an article or book will involve. This was certainly true of us when we conceived the idea for our recently published collection of essays: Teaching Medieval and Early Modern Cross-Cultural Encounters (Palgrave Macmillan, December 2014). We’re both literature professors, of medieval English and early modern Italian, who share an interest in European literary representations of Christian-Islamic relationships. One evening at Kalamazoo 2011, we were commiserating on the difficulty of actually teaching our research. Because cross-cultural encounters involve multiple languages, cultures, geographical regions, and academic fields, they are challenging to both study and teach. Wouldn’t it be great, we thought, to put together a volume of essays on these challenges, a volume that would present the experiences of instructors from a wide range of disciplines? How hard could it be?

In some ways, it was easy. We received submissions from a great group of contributors who are passionately invested in teaching, and whose innovativeness in the classroom, as expressed in their essays, continually surprised and inspired us. Questions raised by contributors included: How did nineteenth-century translations of Beowulf for children shape British imperialism in India? What cultural work motivates the adaptation of early modern Italian epics featuring Christians and Muslims in nineteenth- and twentieth-century folk theatre? How might Shakespeare's Othello help us theorize questions regarding President Obama's religion and nationality that surfaced in the 2008 campaign? Most broadly, how is our twenty-first-century study of the medieval and early modern pasts itself a cross-cultural encounter, and how can we make that encounter relevant to our students?

So what was the hard part? For many of us, it was the process of writing about teaching. We wanted to strike a balance between providing practical in-classroom advice and theorizing medieval and early modern cross-cultural encounters in higher education more broadly. This proved to be challenging, even for contributors who had multiple articles and monographs under their belts. Part of the problem, we realized, is that we are not trained to write about teaching (in graduate school or beyond). We’ve all exchanged ideas with colleagues, consulted teaching guides, and tried new approaches in the classroom, but none of this prepares us to craft an essay about what teaching our research actually looks like. We went through many, many drafts, as our incredibly patient contributors figured out how to write about teaching, and we—equally new to the topic—figured out how to guide them.

And then there was pitching the volume to presses. We soon learned that to many presses, a volume on pedagogy is neither fish nor fowl. No, we had to explain, this is not a textbook, nor is it straight-up medievalist/early modernist research on cross-cultural encounters. Some colleagues also responded skeptically, opining that a more conventional collected research volume (or even better, a monograph!) would be more professionally advantageous. One person tried to stage an intervention on these grounds, an experience both humorous and disconcerting for us. As we explained time and again, the whole point of our volume is that while there is loads of research on early cross-cultural encounters, how to translate this research into the classroom has not been addressed.

To give these well-meaning skeptics credit, it is true that the value of scholarship on pedagogy is still viewed as questionable. Part of the reason we were able to pursue this project is that neither of us needed this book to count toward tenure: Karina is tenured, and Lynn left a tenure-track position, a difficult decision but one that freed her to pursue projects that truly interest her.  But the disjunction between writing about our research, teaching our research, and writing about our teaching, makes us wonder—as we did throughout the editorial process for this volume—about our roles as scholars and instructors. If departments want to hire faculty who think critically about their pedagogical approaches and whose research agendas match the curricular needs of their students—as evidenced in job listing requests for statements of teaching philosophy and interview questions about the mutual enrichment of teaching and research—why do we face so many institutional obstacles when we attempt to bring our research into the classroom, and our teaching into our publications?

Of course we knew about the pervasive divide between academic research and teaching, but working on this volume brought that divide home to us in ways that we hadn’t foreseen. Yet we don’t want to sound pessimistic. Although some doubted our project, many others supported it enthusiastically. We also realize that for regular readers of In the Middle, many of whom frequently address the intricacies of—and seek advice about—how to teach a particular research topic in their Facebook posts and Twitter feeds, we are probably preaching to the converted. Still, this volume has gotten us thinking—and we hope it will get others thinking, too—about what precisely we value in academia, and how we can respond to institutional mandates that don’t necessarily match up with what we personally value as members of the academic community.

And our final word—we’re really proud of this volume, so please check it out!

As y'all know, I love this blog, and I am excited to read this volume. I did wonder a bit about this line: "...it is true that the value of scholarship on pedagogy is still viewed as questionable." By whom is it viewed this way? There is an entire field that exists for the scholarship on Teaching and learning, and it is a vibrant and growing one. I understand the bristling at purely anecdotal work, but much of SoTL would not fall into this camp. There are phenomenal empirical studies, meta-analyses, and research syntheses, though. Also, there are publishers for whom you would not have to work so hard to make the case for pedagogical research. Jossey-Bass and Stylus are the top trade presses, but Harvard UP has a long tradition of teaching books, and West Virginia UP is interested in them too. You'd find both of these presses represented at Kzoo, and there are other university presses that would be interested as well.