"A World of Multiple Natures": On Jamie Lorimer, Wildlife in the Anthropocene 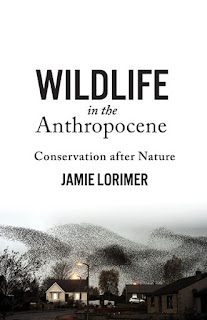 Readers of this blog know that my work took an ecological turn in my fourth monograph -- or, to give my past self a little more credit, I began to intensify some of the environmental thinking already within the fabric of books like Medieval Identity Machines (which opens by imagining the medieval body as ecological interface) and Monster Theory (it did not take the Anthropocene to trigger anxieties about the monstrous limits of the human). Most of this ecological thinking has proceeded collaboratively (e.g. here, here, here, & here) -- and that communality is for me a powerful draw. This fall semester I am on leave, funded to work on two more ecocritical projects, both of them also collaborative: a co-written book (with Lindy Elkins-Tanton) on the Earth as object; and co-edited collection of essays (with Lowell Duckert) that attempts to re-imagine the genre of the keyword anthology to gather environmental humanities types across disciplines and time periods. My summer reading therefore includes many books that push at the edges of what environmental thought, writing, theory and action might accomplish.

Among my favorites so far is Jamie Lorimer's Wildlife in the Anthropocene: Conservation After Nature. A professor of human geography, Lorimer redefines conservation as a forward-looking and dynamic practice. Conservation does not attempt to render the present moment eternal, cannot be addressed solely to charismatic creatures, and will not impose boundaries to delimit preserved areas. Instead it is an open and curiosity driven practice of biopolitics (yes he really does attempt to reclaim that word and render it potentially affirmative) that focuses upon wildlife as unruly, discordant, inventive, "multi-natural," and not amenable to management, abstraction, or commodification. This approach refocuses conservation's gaze to include brownfields and urban roofs, which become as generative of possibility as islands and forests-turned-national-parks. Like most who write about the Anthropocene, Lorimer considers recognition of the epoch to herald a cognitive revolution "akin to the shocking thoughts of Copernicus, Lyell, and Darwin" (1). I'm a bit skeptical of such narratives of novelty, rupture and discontinuity, since they obliterate some deep and quiet continuities and pass over enduring epistemological inheritances. Whether in thinking climate change or geological deep time, I believe we are more like our spurned predecessors than we acknowledge, often to our detriment: we need an archive of richer and more complicated stories about the environment and catastrophe. Newness and epochal periodizations too often strive to liberate us from the weight of our history. But I do admire the Lorimer's insistence that a move to biopolitics gives us needed tools for conceptualizing scales vaster than individuals and species; that biopower is about shared existence and inhuman agency; and that both strategies we have developed for the Anthropocene (a [forced or chosen] return to nature; or a salvific embrace of technology) will not solve much of anything. Inspired by the work of Donna Haraway on multispecies companionships, Lorimer stresses the unruliness and rambunctiousness of wildlife (a term he uses to capture all biological life in its creative, nonlinear, open ended attempts to thrive). He contrasts the preservation of a bird called the corn crake (I cannot not hear Margaret Atwood in that choice) in the Hebrides with rewilding efforts in the Netherlands. Whereas the crake is saved by returning to and maintaining the preindustrial agricultural practices upon which its life cycle depends, thereby freezing the bird and the people who live with it in time, the Oostvaardersplassen (OVP) was reclaimed from the sea and used an experimental space for rewilding: marginal land become an open laboratory for migratory animals to populate and for cattle and horses to "dedomesticate" themselves (in the hope that "their grazing and carcasses would create a novel ecosystem, full of surprising and unprecedented events," 98; this would amount to "replacement of relations of trust over relations of dominance" 107). Lorimer is careful to point out that in actual practice both conservation efforts tend towards each other: even though corn crakes are managed and abstracted in order to judge success in keeping their numbers high ("land sparing"), this practice is conducted on the ground by scientists and volunteers who have to invent local and place-bound practices of knowledge (how do you count things you can't see? How do you live with them as you move through their space?); even though the OVP was supposed to be left alone, in fact there has been significant human interaction with the space and learning from practices that yielded animal suffering ("land sharing," 101). Lorimer's sympathy, though, is fully with rewilding, which discards a fantasy of managing nature and refuses to believe in equilibrium, instead trusting that the generation of difference and surprise keeps ecologies resilient spaces for multispecies thriving (116). The book details at length the importance of media to creating human affective investment in such projects, praising the work of curiosity and sympathy (which Lorimer argues motivates scientists in the field as much as the publics that might be convinced to support their work).

Curiosity and hope are, without much fanfare, the words that weave together the book's narrative: Lorimer's curiosity to follow various modes of conservation in the Anthropocene, and hope that unexpected events and forms of living together will emerge from the practices he details; the curiosity that may be conveyed through media modes like experimental film in order to move audiences to hopeful ecological action; the curiosity that is a desire for surprise that will yield the sciences and the companionships necessary for creating a hopeful future in a time of environmental degradation and unchecked market forces that render everything a knowable commodity. Lorimer's posthumanism (which he also calls a cosmopolitics) refuses to give up on humans, conservation, technology, administration, politics -- because only through such things can "life and subjectivity, both human and nonhuman" be protected and valued in the face of relentless, inhumane, resource-seeking neoliberal capitalism. Wildlife conservation (a phrase Lorimer wants to maintain as a paradoxical) enables "companionships" that are not "premised on anticipating and securing fixed identities and territories" (190). The book ends with a plea for "a more open mode of conservation," wilding:  "shorn of the prefix re-, it opens up the temporalities of conservation. It is about the future as much as the past. It offers hope" (190). This optimism is best expressed very early in the book when Lorimer imagines the Anthropocene yielding to the Cosmoscene:


The Cosmoscene would begin when modern humans became aware of the impossibility of extricating themselves from the earth and started to take responsibility for the world in which they lived -- turning to face the future, rather than running from the past, and acknowledging, building, and absenting from relations with all the risky, sustaining, and endearing dimensions of the planet. The Anthropocene would become a staging point, the threshold at which the planet tipped out of the Holocene before embarking upon a post-Natural epoch of multispecies flourishing with its own, perhaps less dramatic, stratigraphy. (4)

I'd push at that metaphor, and point out that running from the past keeps is what keeps faces turned to the future, always at the expense of the present. Why not stop running, catch a breath, account better for the complicated stories we have been telling about multispecies flourishing in the face of catastrophe for a very long time? These stories inhabit us, sometimes compelling us to diminish the possibilities for "multispecies flourishing" ... but sometimes rich in possibilities for imagining that companionship in all its intricacy. Against epoch-making and dramatic stratigraphy, I'd rather see dense archives, porous histories, and the surprising endurance of unconformities.
Posted by Jeffrey Cohen at 2:16 PM

Great post, Jeffrey. Does your keywords book plan to deal with 2 of the key metaphors of both ecotheory and, uh, stuff in general right now, viz., "depth" and "openness"? The latter of course is always on the side of freedom, the unexpected, and often on the side of the good as well (see also "blurring the boundaries"), while the former's on the side of seriousness, infinite ethics, and also uncertainty. The 2 seem to be opposed (the one a clearing of being, the other a withdrawal or guardianship of being), yet they have something in common with each other.

Depth and the open do have something in common, and I'm tempted to say it's found in unconformity -- the rupture of the depth (stratigraphic) model, its opening into unexpected conjunction and view. Maybe that even gets us out of the "depth vs surface" thing: depth viewed as a surfacing, as an opening, as temporal conjunctions.