Stone: An Ecology of the Inhuman 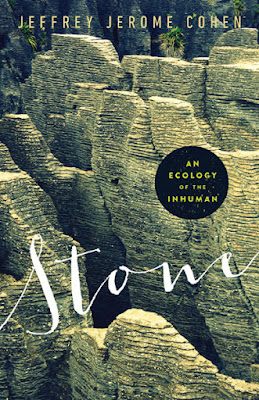 Even though the (petro)genesis of the book was extensively blogged here at ITM, I never announced that Stone: An Ecology of the Inhuman is now in print. It is! The book is not all that expensive, either: less than $20 on Amazon ($14.49 for the Kindle version) -- though if you want to be a good-souled consumer and can afford it, think seriously about purchasing Stone directly from the University of Minnesota Press website. UMP is a not-for-profit publisher, so any money generated from sales goes directly towards bringing more titles into print. Stone is my 5th book for Minnesota, with #6 on its way; Richard Morrison and Doug Armato have made it a superb organization for authors, and I am an ardent advocate. Having worked fairly extensively with corporate publishers who are ruining the field as well as not-for-profits like UMP and innovative OA presses like punctum books, I urge you to support the latter two as much as you can, including with your own coin when possible. They care so much more for innovative, accessible scholarship -- and what future do you want?

If you'd like a taste of Stone (warning: it tastes earthy, with a hint of mineral, and strong terroir), you can read an excerpt from its recursive introduction at continent. And here's an interview that I did with Schlock just before the book appeared, and Anne Harris's extraordinarily generous blogged reading of the book. And now Steve Mentz has also blogged his experience of reading. Stone is a melancholy work, limned by catastrophe and loss. Its narrative attempts to stay affirmative but the suspicion that the struggle will be lost haunts. Its scholarship is interrupted by three personal excursus, all of which are drawn from blog posts (for example, this one from 2009), and an afterward set in Iceland. These blogged portions have been revised for the book, but not all that much: posting to this blog has been essential to completing the project. The community that social media enabled around its completion also deserves celebration: I could not have completed this project in solitude. Stone is a force for companionship.

The book is likely to annoy many readers: too personal in parts to seem sufficiently scholarly (the bleed-through between the sections marked as an excursus and what follows is going to make for some irritated reviews; I can pretty much frame the take-downs in my mind already), too scholarly in others to seem accessible and readable (it's by a medievalist so of course there are chapters with 100+ footnotes in a miniature Babel of languages living and dead). Stone took a very long time to write. Even after the research was as complete as it was going to be (which is to say, once I drew an arbitrary line and said that gathering materials could go on forever, but it is not going to go on forever), the process of finding the proper form and voice that the book wanted was full of dead-ends and abandoned starts. I am not completely satisfied, and would likely rewrite the whole thing if I could ... but I am also very happy to have the book in the world.

And it has been a delight to have some reactions to Stone already: unexpected emails from people far outside my field who read the book because they are fellow geophiles (and the emails often arrive with images of favorite rocks or petric artworks); the appearance in the mail of small stones, poems, books and pamphlets from people I don't know who wanted to share something with me after reading the volume; the sound artist Elysia Crampton dedicated a song to this work; and the posting to social media of pictures of the book being read in rocky places. A book wants to be read, and it makes me happy indeed to see that happen with Stone.

And in case you do not get your hands on the book, I want you to know that you as a reader of In the Middle are thanked in the acknowledgements. Stone was crowdsourced here. I could not have completed this project without you.

Posted by Jeffrey Cohen at 8:30 AM