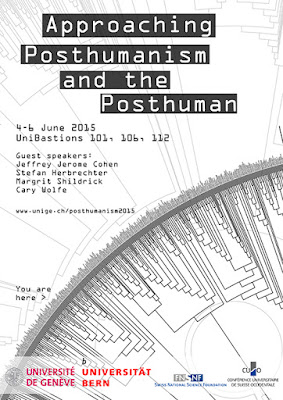 by J J Cohen
[please contribute to this lively post about doing writing!]

I'm just back from a rich conference on Approaching Posthumanism and the Posthuman at the University of Geneva. I was one of four guest speakers. Two friends (Cary Wolfe and Margrit Shildrick) also presented, as did Stefan Herbrechter, whose work I admire and have always wanted to meet. Of the speakers I was the only one whose archive is premodern -- and I was very pleased to see the inroads that medieval and early modern studies have made to a topic that is too often associated only with contemporary film literature and art. It helps that some of the field's luminaries have insisted that work that goes under the name "posthuman" must recognize the importance of a "prehumanist" past: Cary, for example, has been an excellent collaborator and his Posthumanities series at UMP is actively seeking earlier historical work. Stacy Alaimo, Jane Bennett, and Tim Morton are longtime allies of those with a premodern focus. Karen Raber, an early modernist (who was an invaluable presence at the conference and so much fun to hang out with in Geneva), oversees the Routledge series Perspectives on the Non-Human in Literature and Culture. Medievalist Eileen Joy runs punctum books, whose commitment to making the posthuman past accessible is extraordinary. And so on.

The conference focused especially on fostering and intensifying the work of students in the midst of pursuing their doctorate. Every guest speaker therefore also lead a workshop that gave these students time to question vigorously and intimately (each workshop was about 20 people) one of the conference themes. Socializing was built into the flow of the three days, so that ample time was given for mingling over coffee, sharing lunches and a celebratory dinner, and staying up late at cafés drinking wine and waiting for the nocturnal breezes to disperse the day's heat. Deborah Madsen, Manuela Rossini, Kimberly Frohreich, and Bryn Skibo-Birney did an inspirational job of organizing the conference and have my deep thanks. I especially appreciate that Kimberly and Bryn are graduate students who worked tirelessly to make this thing work so well -- and who made so many opportunities available internationally to other doctoral students. They also found the best cockatil bar in all of Geneva, and I think that's really saying something.

Geneva is an interesting city in which to have held the conference, both because it's the birthplace of Frankenstein's Creature and the city in which Saussure through his lectures on linguistics engendered much of the critical theory that birthed posthumanism. A city of bankers and commodities, Geneva is also enamored of its affluence and influence. It's not an easy place to be a vegetarian (which so often was understood to mean that you will eat only a little meat). And it was extraordinarily warm (almost 90 each day). But here are the ample positives: the enclosing Alps radiate grandeur; Lac Léman with its deep blue, glacial waters is breathtaking (to overcome jet lag I took a boat to the village of Yvoire the first day); public transportation is terrific, and free to visitors; the city loves running, so ample paths trace the shores of the lake (and how this love of running can coexist with a love of smoking is beyond my comprehension); the French spoken here is slow, almost without accent, and quite formal. If you want to practice French as learned in a French class, here is your city: no syllables get swallowed. And the expectation that you will treat each transaction, even the purchasing of chocolate, as if the very fabric of Western civilization has been woven to enable that moment makes such interchanges strangely easy rather than fraught, even when jet lag is making you flub your French: you know exactly what is expected, from the opening bonjour to the departing je vous souhaite une bonne journée (and there is no possibility of anything but vous here). I did find a lone vegan restaurant at the edge of the city, and it was excellent (I wanted to reward my doctoral student Alan Monstroso for presenting so excellent a paper at the conference) -- but for the most part I was very happy that I eat cheese, since the fondue is extraordinary. And nearly a religious ritual, culminating in the scraping of the crusty cheese off the bottom of the pot, adding an egg, and eating la religieuse (as it is called) on a final slice of crusty bread. Fondue is also the perfect meal to share with a group of new friends late at night in a medieval square as thunderstorms boom in the mountains.

My lecture was on the ecological impress that propels onomatopoeic words -- and an attempt to open poesis itself to the nonhuman. I tried to choreograph carefully a rumination over three words that arrive from posthuman environs (tsupu, woof, fnorteth) with the projection of some terms behind me that are less anthropocentric than we think. Something about speaking about such themes in the company of Frankenstein's Creature, who first learned the language of the world through the groaning ice on Mont Blanc, and Ferdinand de Saussure, who unhooked words from things maybe too well, seemed right. I'll post the talk later this week (and I understand that a it was video recorded as well and will eventually be accessible to all interested).

(images by Bryn Skibo-Birney and taken from the conference FB site)
Posted by Jeffrey Cohen at 9:33 AM