CFP: MAMO 3 (the Middle Ages in the Modern World conference) in Manchester, 2017 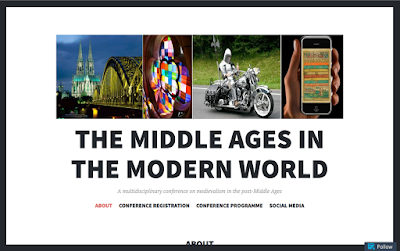 
Friends who like medieval things! I am one of the keynote speakers at MAMO 3 (The Middle Ages in the Modern World conference) in Manchester, June 2017. PLEASE consider proposing a panel or session; I would love to see you there. For complete information about the conference will be integrated into the city follow the link below.

----
Dear all,
Following an earlier call in April, we are now making a second call for papers for the Middle Ages in the Modern World conference (MAMO) in Manchester in summer 2017. Please circulate widely. For full details, see MAMO's website, themamo.org. The conference email address is: mamo.conference@manchester.ac.uk.
Confirmed keynote speakers at this stage include Jeffrey Jerome Cohen (George Washington University) and Chris Jones (St Andrews). The poets Jane Draycott, Lavinia Greenlaw and Matthew Francis will also be participating. A programme of cultural events associated with the conference is taking shape, including a season of medievalist films at the independent cinema, HOME Manchester, and a full dramatic production of Lavinia Greenlaw's A Double Sorrow in Manchester Cathedral. There will be a celebration of the work of the author Alan Garner, featuring an in-conversation event with Alan. As a city Manchester offers a wealth of neo-gothic architecture, much of it under the direct influence of Augustus Pugin. There will be opportunities to visit the sumptuous neo-gothic John Rylands Library, and the Ford Madox Brown murals in the Alfred Waterhouse-designed Manchester Town Hall. More information will follow on the conference website in the coming months.
all best,
David, James, and Anke

MAMO III
The Middle Ages in the Modern wOrld
After successful editions at St Andrews (2013) and Lincoln (2015), MAMO III will take place in Manchester between 28 June and 1 July, 2017. We invite submission of proposals for panels, roundtables, or individual papers by 30 September 2016. Panels can consist of three short papers (20 minutes) or four of fifteen minutes’ duration; roundtables should consist of four to six speakers.For a panel or roundtable proposal, panel chairs should send a brief (4-5 sentence) rationale for the panel along with proposed paper titles, speakers' names and institutional affiliations, and abstracts.
Individuals may send proposals for papers: please include a title, your name and institutional affiliation (or independent status as appropriate). Abstracts should not exceed 250 words and should be sent, as attachments in Word, to mamo.conference@manchester.ac.uk.
https://themamo.org/
Posted by Jeffrey Cohen at 1:17 PM