“It snewed in his hous of mete”: A Nicholas and the butchers capital from Narbonne


[what follows is a light piece, quickly written; for a real post, see below, from Cord Whitaker, whose paper I had the great honor of witnessing at the recent London meeting of the New Chaucer Society. All the papers in that session, which will be appearing sequentially here, were superb, and the crowd, I'm happy to say, was large. Read Whitaker first, I insist.]
In the visual arts, it’s not so easy to portray anthropophagy as anthropophagy. Guts are guts, and flesh is flesh, so much so that the corpus/porcus pun was standard in medieval writing, even far outside works like the Anatomia porci manuals, which used pig bodies to teach human anatomy. The anthropophagy artist has to make sure to include a head, some feet, some hands, some hint of bipedality, some formal echo of the living bodies on the other side of the cleaver: otherwise, how can we be certain that what’s being prepared had at least once been human?
As I’ve written before – in an agonized psychoanalytic manner that befitted my anxious interests of those dissertating days -- few medieval stories are as aware of this slippage between human and other fleshes as the story of Nicholas and the butcher (lighter version here). In the most widespread version of this ur-Sweeney Todd story, three traveling scholars are put up for the night by a butcher, who decides to rob them. When he finds they have nothing of value but their own bodies, he kills them and turns them into sausage. Saint Nicholas, the special object of the scholars’ piety, soon turns up, and, in one version of the South English Legendary, asks the butcher for his best meat, eliciting a confession, and then a miracle, as Nicholas (un)renders the scholars whole.
The visual depictions I know, like this twelfth-century font, tend to show the butcher looming over the scholars in bed.
Or they show three young, naked men emerging from a salting barrel, as with this churchfront statue from Porto.

Few show the butcher at work, because care’s needed to ensure that we know the butcher’s cutting up people.
Hence my excitement at coming across this capital (below) at Musée des Augustins in Toulouse a few weeks ago. The capital, dating to the second half of the twelfth century, comes from Narbonne’s Saint Paul basilica, and show the butcher amid a hodgepodge of body parts: a torso perhaps, but mostly extremities -- hands, feet, and a couple heads -- so we know what’s being stuffed into the barrel, so we know something's gone awry, while also reminding us, again, that, professionally speaking, flesh of whatever sort is mostly a matter of joints to a butcher, who can make money from us even when we feel certain we carry none. And that what's needed for us to be more than flesh is the care, the mourning, the outrage, the obligation, of some passing saint -- here, seated, brandishing his crozier at the butcher -- another body of flesh, so holy that they refuse to eat us, even just a little. 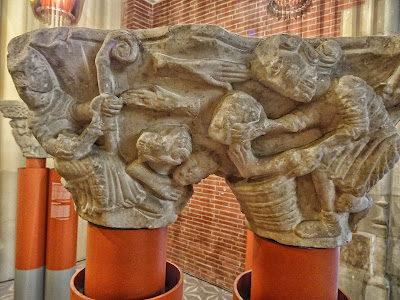 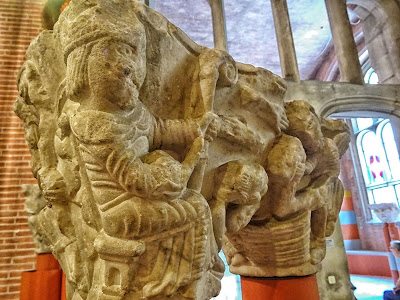 Notably, not far from this capital, the Museum displays another twelfth-century carving, from a church in Oô, of a woman being consumed by a snake, or suckled, or straddled by one, which runs from a breast to her genitals, which perhaps as a whole -- as the Museum suggests -- represents luxury. Luxury here is the female flesh, fed on itself, delighting in itself, the form that flesh takes in its mutability, its putrefaction, in its loving itself the wrong way. As if clinging to the flesh could ever be anything but excessive, unjustifiable, an unwarranted vanity in this world of fleshes that have no more right to be here than we do. Some bodies, like hers, are bodies of flesh, made to stand in for all that's wrong; and some, like the three clerks, are given the chance to be a bit more. 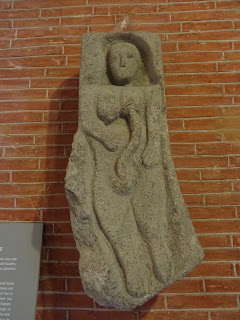 (for more on me and anthropophagy, see, most recently, my contribution to the recent anthology Fragments for a History of a Vanishing Humanism (ed Seaman and Joy), just out from Ohio State University Press)

(hi gang - yes, before you get all in my business, I know mete means "food" in the Chaucer, but you'd have gone with that title too if it had thrust itself upon you like it did on me.)
Posted by medievalkarl at 12:32 PM

Without changing the content of the post, if I were to start this again, I'd go back and take another picture (maybe I'll get a chance in Narbonne, tomorrow!) - because of the other side of this very Nicholas capital, ignored by me because I hadn't written this post yes, is the other famous Nicholas miracle, where our saint saves 3 girls from whoredom by tossing them a dowry, slyly, through a window. He saves these girls from a life of selling out their flesh.

In both cases, flesh is marketed. But for boys, it's a market of violence and consumption, of the pleasures of the flesh in one way, and for girls, it's a market of sex and, well, violence, but one that speaks to some 'inherent' quality of girlhood within the increasingly fetid context of 12th-century clerical misogyny.

there's a short paper in that, surely. or at least part of a day in a seminar.