[So many good things on the blog right now: the GW MEMSI calendar; a welcome for Leila K. Norako; Wan-Chuan Kao on #palefacesmatter; and more. Don't forget to scroll back! -- JJC]

It’s strange, attending papers on obscure points of medieval literature at a moment of national crisis. Halfway through NCS 2016, in between refreshing the Guardian live coverage of Theresa May’s appointment of her new cabinet, I tweeted that Brexit was haunting the conference; since the conference I’ve been trying to collect my thoughts about what Brexit means for me as a medievalist. Oddly enough, I can’t stop thinking about Fifty Shades of Grey.

English people (myself included, I’m sure) have a tendency to exaggerate their country’s importance on the world stage, but I think it’s hard to overstate the potential impact of Britain’s decision to leave the EU. The potential impact, I say - nobody knows what’s going to happen. A feeling of stunned alarm echoed through every conversation I had at NCS, and even a few weeks later the future is just as murky (although at least we have a prime minister now). As a British immigrant living in Canada, my immediate fears for the future are personal: for my friends who work for German and French companies in London, for my and my Canadian wife’s long-term plans to move to the UK, for the repercussions upon my colleagues in UK academia from that the loss of EU funding and people. I am ashamed of the dramatic rise in racist attacks and abuse in the home country I used to love for its vibrant diversity, and I’m ashamed that so many people in my homeland would consider it my right as a white, English-speaking person to live and work abroad, but would refuse the same privilege to immigrants within the UK. I am afraid for the neglected, angry communities suffering under Austerity Britain who voted Leave, and will suffer more as a result.

Before NCS, I had not really thought through the consequences of Brexit for medievalists, beyond my fear for the UK job market. But in almost every panel, without there being any kind of overarching plan or agenda, speakers and audience members kept bringing up Brexit. It was clear it was on everybody’s mind, but there was more to it than that. Now, this is going to seem trivializing, but I don’t mean it to be: the only recent Medieval Studies conference I remember when discussion of a news event has seemed to me as compulsive within the academic discourse was at NCS 2012 in Portland, when Fifty Shades of Grey was becoming the fastest selling novel of all time and topping (so to speak) all the bestseller lists in the US. People could not stop talking about it. Fifty Shades came up in Q&A’s and in papers, called on for cheap laughs and more thoughtful analogies. The tone was very different, then, as you can imagine; amused and cynical rather than appalled and angry, but there was the same bewilderment. It wasn’t simply that conferences tend to reflect whatever is happening in the news - terrible and wonderful things are happening somewhere in the world all the time, and for many attending NCS week, the police violence in the US or the Ramadan bombings in the Middle East must have felt more urgent than the UK’s constitutional crisis - but rather that something was happening that struck at anxieties within the profession in a very particular way.

What is English literature? The success of Fifty Shades pointed to the instability of the latter term; Brexit to the instability of the former. At NCS 2016 I was in a panel called “Mediating Italian Literature”, one of several in the Chaucerian Networks thread on Chaucer’s continental relations. At the “Are We Dark Enough Yet? Pale Faces 2016” roundtable, some of whose papers have been posted on In the Medieval Middle, speakers discussed racism, alienation, outsiderness, and legitimacy in Medieval Studies. In the “Charisma” panel, David Wallace - editor of Europe: A Literary History, 1348-1418 - in a blistering critique of C.S. Lewis’ essay “What Chaucer Really Did to il Filostrato”, ended with a segue into Brexit. After showing how Lewis’ understanding of Chaucer’s reception of Boccaccio is framed by homophobic and misogynist metaphors, Wallace pointed out that, in the spirit of healing the divide between Remainers (in which camp Wallace placed himself and, by implication perhaps, the audience) and Leavers (who so often appealed to the nostalgic and imaginary England that Lewis helped create), we should contextualize Lewis’ essay in his own ambivalent and at times hostile relationship with Englishness as an Irishman.

The success of Fifty Shades of Grey stuck with medievalist literature scholars in particular, I think, because it forced questions into the open about what people want to read, about originality, ‘good’ writing and public literacy, and also about misogyny, sexuality, and control of women’s reading. And also, of course, there is the ongoing question of medievalists’ relationship to the way medievalism and violence are so often twinned in the media, and how to talk in the classroom about sexual or eroticized violence in medieval texts. At the BABEL “Far Out!” panel at ICMS, Kalamazoo this year, Karen Cook gave a paper about the role of Fifty Shades of Grey in medieval music marketing. As a cultural event of relevance to medievalists, Fifty Shades hasn’t gone away yet. It’s easy to scoff at a comparison with Brexit, but NCS 2012 fell at a moment - an astonishing one, in the grand scheme of human history - when it was socially acceptable for women to openly read BDSM* erotica on public transit. In its own way, it was a watershed, a moment to look forward and back.

The impact points of Brexit on Medieval Studies are very different; the victory of the Leave vote changes the way we must talk as scholars and teachers about borders, nationality, and language; about racism, insularity, and xenophobia; about distrust of experts, about class and academia, and the dissemination of knowledge; about the role of the past in the future, and about war. At “Are We Dark Enough Yet” (and I should say that I missed this session, to my dismay, and am extremely grateful to the livetweeters who enabled me to follow it regardless), Cord Whitaker (@profcwhit) pointed out that medievalists are in a position to criticize and destabilize institutions of modernity. As the slow and painful conversations begin in the UK about how we (or they? - I’m having trouble dealing with my own complicity) imagine ourselves as a nation, NCS 2016 brought home to me how vital - and perhaps inevitable - it is that as medievalists we take part in these conversations.

To read the livetweeting of “Are We Dark Enough Yet?”, the twitter hashtags were #ncs16 #1F or #s1F, or #darkenough, or #palefacesmatter, as well as the papers posted on ITM (here and here, so far).

For reading on the Brexit referendum, and the immediate short-term and possible long-term consequences for England, the UK, and the EU, I recommend digging through the Guardian’s EU referendum tag. 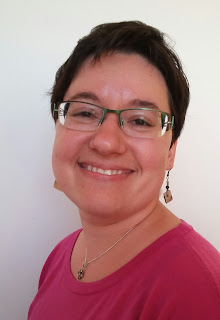 Anna Wilson is a recent PhD and adjunct at the University of Toronto. She works on medieval and modern fans (the text-loving kind, not the air-circulating kind), affective hermeneutics, and reception. She's currently writing her first book on fanfiction, immaturity, and late medieval literature.
Posted by Jeffrey Cohen at 4:46 PM