Eileen Joy originally asked me to review this book in draft for punctum. (I thought it was indispensable to both Shakespearean and environmental studies – do consider adding it to your syllabi.) Some of what follows reflects my original comments, but, true to the polyvocal proverb Dionne details, different conversations ensued when I read it a second time. Thank you for allowing me to share my thoughts. 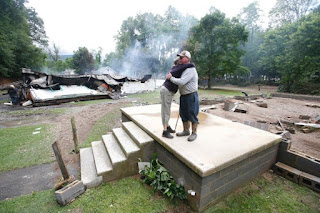 “[T]he proverbial clock is ticking” (16). If this line penned somewhere underneath a Tokyo overpass sounds alarmist, that is because Craig Dionne intends it to be: “[a]t the time of this writing” (26), every day, the Fukushima Daiichi Nuclear Power Plant leaks eighty thousand gallons of radioactive waste into the Pacific Ocean. As the life-clock of the world steadily and tragically ticks down like so many nuclear isotopes in half-life, reading the “interpretation of cosmic decay and ecological catastrophe” (16) in Shakespeare’s King Lear (1604-5) must necessarily press on anthropogenic shores: “How can we imagine doing the work of literary studies and not consider such an eco-materialist context?” (27). Risking presentist critiques, Dionne unabashedly and uniquely calls for enlisting the clock – the archive – of proverbs while strolling these blasted beaches. In Asian archipelagoes or elsewhere, he asks us to “liste[n] to the past” (25) and consider what its telegraphic ticks tell us about shaping future worlds and commons to come in this epoch known (debatably) as the Anthropocene. In short, he argues that “Shakespeare … stage[s the] practice of speaking proverbs – collecting and using adages – and showing us its therapeutic value as a form of collective speech in times of stress” (18). The “posthuman” of his title derives from the fact that these encapsulated maxims, acting like disembodied messengers from a not-too-distant past, present themselves to the beleaguered human subject, who, performing as a grammatical automaton, utters them for his or her short-term benefit. The same animatronic subject then “speak[s] to the future” (25) by telegraphing these wisdom receptacles across horizons of uncertainty, into time zones whose citizens assuredly suffer from some sort of eco-catastrophic strife as well. In one of his most memorable moments, he defines “[s]peaking proverbs” as a hopeful exercise precisely because it does not salvage the apocalyptic fatalism of Lear’s final scene – again, we are to note nervously the ticks on Shakespeare’s dissolving strand – but rather forces us to see such “proverbial reflex” as part of the play’s “central existential questions (the meaning of familial love, commitments to friends, our place in a secular world) [all] in a new relation to the main question of surviving within fixed environmental limits” (67; 150-1). His conclusion, and faith in, “repurposing fatalism” is admirably catalytic, meant to inaugurate new possibilities for species’ creative acts of self-invention: “Literary narrative should be part of our toolkit for the sustainable future” (175; 154).

Timothy Morton has recently claimed that “[g]eological eras are nested catastrophes” (70), and, in a strange coincidence, I had been reading Dark Ecology: For a Logic ofFuture Coexistence (2016) while ruminating over Dionne’s book. I had already appreciated the motley assortment of actors that “posthuman paramiology” stacks up; I now had the opportunity to burrow deeper into trans-historical calamites that defy past or present categorizations: Japanese tsunami stones; Matthew Arnold’s “Dover Beach”; Amitav Ghosh; seventeenth- and twenty-first-century still lives; a nuclear waste storage facility in New Mexico; various proponents of object-oriented ontology and the “critical vitalist” new materialisms; cognitive science; evolutionary psychology; Renaissance humanist literacies, especially Erasmus’s; and those haunting tablets of survival – for whom, for how long – known as the commonplace book. “Proverbs speak from a placeless time before” (63) and yet mnemonic language nonetheless becomes emplaced, enmeshed in a given eco-material environment, enveloped with all its encounters, “stored as vital traces of world-being left for later us, like remnants in the fault lines and rifts of striated rock sediments” (106). We all can think of our “nest,” our dwelling-place, in similar ways; mine, in fact, is related to Japan, where each week the same amount of force it took to atomically destroy Hiroshima is employed in the mechanized removal (MTR) of the Appalachian Mountains. And on 23 June 2016 a so-called “Thousand Year Flood” devastated southern West Virginia. Almost ten inches of rain fell in approximately half a day, killing nearly twenty-five. The region is still reeling. I am not sure what proverbs were repeated when the waters continued to rise, when a state of emergency was declared by Governor Earl Ray Tomblin. I am sure they were; perhaps they repeated Lear’s Fool: “He that has a house to put ’s head in has a good / headpiece” (3.2.27-8). I watched the footage of fiery houses swept downriver through White Sulphur Springs, an absurdist image that even a Fool must believe. The almost biblical pronouncement of once-in-a-millennium fails when flash floods occur with greater frequency (Louisiana). Reading Posthuman Lear around the time of this posting, at least for me, tried out Dionne’s hypothesis that “accessorizing” – the ability “to fit ourselves” – with proverbs is essential – even ethically practical – in nested moments of climatic mess.

One of the play’s most problematic lines, and one that just so happens to be a proverb, has always haunted me: Lear’s retort to his “untender” daughter Cordelia, “Nothing will come of nothing” (1.1.99). The king’s echoing “nothing” is often construed as a hallmark of nihilism; it is a mnemonic mantra we wish he (and we) would forget. The aphorism Edgar recites to his blind father, Gloucester – “The worst is not / So long as we can say ‘This is the worst’” (4.1.30-1) could be interpreted, then, as the antidote to Lear’s/King Lear’s acerbity: the only way is up. But this is a troubling dichotomy, I think, for it reinforces two possibilities – up, down – along with their moralistic valences, either salvation or condemnation. I usually critique such catechistic maneuvering with my students, observing that one of the play’s few (heartbreaking) moments of help – Edgar’s bracing “Up. So” (4.6.80) – is not a way to think about redeeming the play, or of turning the down-turn of “catastrophe” (and the genre of tragedy) into an up, but an instance in which our methods of recognizing the world are themselves inverted. Gloucester believes, after all, that he has fallen to his death: even existence-canceling nothingness is taken from him. If the characters stand, they teeter on the brink; and yet they totter on: “I stumbled when I saw” (4.1.20). In other words, when the up becomes down (and tumble, vice-versa), a way onward appears. Dionne’s insight here is thinking that spatial-temporal advances actually depend on their simultaneous retreats – that is, to say the strange saying from other times and in others’ voices. Will providing someone with a pithy proverb erase their trauma, or rebuild their floating, fiery home? No, but it may lessen loss and its lessons: it might not entirely refute the “sad time[s] we must obey” (5.3.392), he argues, although it can ameliorate them with feeling, by gauging “the weight of the pronouncement [in order to] move forward in a way that preserves knowledge of the powerful loss, to remember the past as if chiseled in stone, but in a way that protects us from our future, life approving the common saw” (99). In my opinion, this book’s greatest contribution is illustrating a middle space of up-down and social-ecological conjunctions, and, furthermore, giving us its name: “a sympathy machine” – run on mottos and emotions – that bespeaks adaptation with non/human beings as an ethical mode of resilience. Let sympathy’s “contagion” continue to do its work (123), reader, for it is a potentializing place to be, one definitely worth inhabiting. “Do we really find an answer here about what defines us?” (129). Not really, and that is precisely Dionne’s point: that holding the human in in-definition, mid-sentence, is also an onto-epistemological holding-open, a means to re-make collectives linguistic and fleshed. Thus Edgar’s “[s]o” has it: “so” take to the flat ontology known as the heath, also known as the world.

My parting proverbial thoughts turn to Lear’s very next line after his proclamatory “nothing”: “Speak again” (1.1.99). While Lear might double-down on his failing love test, his request to “[s]peak again” tests our own love for a presumably doomed world: whether to stay (say) in it, extend our axioms and attempt to stay afloat, offer a proverb to one who wishes to persevere. Posthuman Lear ultimately demonstrates how words endure, and, in doing so, allows us to glimpse the world’s endurance. And its losses – including acts of forgetting, of ignorance forced upon cultures or inculcated over ages – in an effort to better understand why they happen at all. Dionne’s study is itself an exercise in rhetorical resilience, a collection of secular proverbs contra cynicism that encompasses not only environmental experience (eco-tones under stress) but also the academy (humanities on the edge). Reading his book evidences why reading and writing remain important within anxious Anthropocene nests; why these reflexive – and reactionary – skills at our disposal demand greater inter-disciplinary and extra-periodization alliances; why we should check our impulses to assume that everything is “rote” and confront our lingering fears that “there is nothing left to say” (22). What is a “proverb” if not a forward doing as well as a speaking, a “put forth” (pro-) “word” (verbum) of action? An event “on behalf of” (pro-) an other, extensions over endings, futures over foreclosures? We need not confine this “speak” solely to logos or the human proverbialists’ handbooks, either; let us accessorize ourselves, the more-than-human “us,” with adages that additionally communicate nonhuman articulation. “Proverbial speech,” Dionne maintains, “has a positive value.” “Thy life’s a miracle,” Edgar reminds his father after his fall, “Speak yet again” (4.6.69). Proverbs re-define the world, even if “apocalypse sells” (174): they did mine, “[yet] again,” and I promise they will yours.
Posted by Jeffrey Cohen at 8:44 PM