So You Want to Raise a Medievalist II 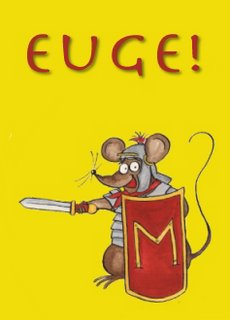 You'll never transform your children into tiny medievalists until you (1) snatch them away from their Nintendo DS and (2) force them to learn Latin.

I don't have any advice on (1), but for (2) a book that is delightful -- and that now seems to be becoming a series -- is Minimus, from Cambridge University Press. As you may have guessed from the title, the book centers around the life of a small mouse (oh how those classicists love their puns). He dwells with a family who has been stationed in Roman Britain, near Hadrian's Wall, c.100 AD. This family is in fact based upon people whose lives are known from fragments of letters discovered at Vindolanda. The Latin is imparted through simple comic strips and activities. Recently, Minimus even gained his own website.

Minimus is a charming, low pressure way to have a child learn some basics of Latin. In my son's case, I should also add, it triggered an unhealthy interest in the worst of the Roman emperors. Ask him about anything that Nero or Caligula did, and he's happy to share his research (most of it based upon another British book, Ruthless Romans).
Posted by Jeffrey Cohen at 1:09 PM