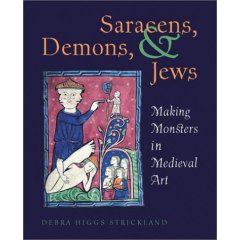 Another book review that I hope is worth sharing. This one should be out in the journal Patterns of Prejudice soon. Did anyone else like this?

The gorgeous frontispiece to this book depicts a sinuous green devil inviting a solemn Christ to indulgence, while its back cover is populated by a rainbow of demons tormenting the damned. With its crisply reproduced images drawn from stained glass windows, manuscripts, and the plastic arts; with its oversized, glossy pages and its generously spaced, wispy typeface, Debra Higgs Strickland's Saracens, Demons and Jews is more than an outstanding work of scholarship. The book itself is a work of art.

Strickland discerns in the western depiction of monsters a movement from innocent fascination to a hatred-spurred rejection. Monsters are in the process transformed from marvels to contemplate into enemies to destroy. This metamorphosis in cultural meaning is catalyzed by Christians' burgeoning desire to distance themselves from rival ethnic and religious groups. As a result the so-called monstrous races (creatures of strange body and even stranger custom who have haunted the imaginative spaces of the west since at least the time of the early Greeks) stop referring to mythic beings that dwell in some great and ambiguous Beyond and begin to incarnate those toward whom Europeans harbored a real and growing animus. Once the vocabulary of monstrousness inherited from the classical tradition was applied to the Jews who lived among the Christians and the Muslims of Iberia and the Holy Land, the possibility that these peoples might be co-equal tended to vanish. Strickland's book, then, is less about monsters per se than about the process of monsterization, a heterogeneous set of representational practices that varies over time and place but always had the same outcome: the denial of humanity to the people represented.

Saracens, Demons, and Jews begins with a succinct preface that lucidly articulates the main themes, and contains a series of five chapters that flesh out the analytic framework through close engagement with a series of specific and usually related images. Comprised of a quick excursion through classical and Christian theories of monstrosity, the first chapter is the least innovative, covering ground that scholars have been treading for several decades. The chapter culminates, however, in the bold thesis that the classical monstrous races "with their deformed bodies, strange dwellings, barbaric habits, and sinful behaviors" were the template upon which later medieval constructions of non-Christian groups were based. This emerging tradition of monstrous religious Others was hybridized with Christianity's interest in "Demons, Darkness, and Ethiopians" (the title of chapter two), so that representations of Jews and Saracens of the Middle Ages combine the infernal with the classical. Thus in a famous antisemitic caricature of the moneylender Isaac of Norwich contained in Exchequer roll for 1233, the Jew and his wife are depicted consorting with devils.

Whenever Christians imagined Jews (chapter three), they tended to think of them as a stubborn and malicious race, unchanged since their rejection of Christ centuries earlier. Thus it is not uncommon to find illustrations of biblical Jews sporting the pileum cornutum, the horned hat that medieval Christians forced Jews to wear as a distinguishing sartorial mark. Such scenes would also reinforce the pernicious notion that contemporary Jews were just as responsible for deicide as their forebears. These negative depictions of Jews would also have had real-world effects. In a world increasingly saturated with anti-Jewish visual propaganda, it was increasingly easier to allow Jews to become victims of violence, and even of mass expulsion.

Depictions of Saracens (Muslims) and Tartars (Turks and Mongols) were hardly more positive, especially once crusading fervor had disseminated powerful fantasies of the monstrousness of these non-Christian peoples. As chapter four indicates, these groups were often depicted as dog-headed men, dark-skinned demons, and deformed giants. They were also at times granted a more ambivalent existence as physically attractive people in need of conversion. A final chapter on "Eschatological Conspiracies" examines how Saracens and Jews function in Christian thinking about the end of the world. The conclusion to the book ("What is a Monster?") undermines some of the definitiveness with which monstrousness has been analyzed, offering problematic cases of affirmative monsters and declaring that "Medieval monstrosity ... is neither positive or negative: it is both" (255).

If the book has a weakness it is in its failure to explore this positive aspect, the attraction of the monster, preferring instead to equate ugliness with simple rejection. If that were simply the case, could a book about monsters be as beautiful as this one is? So many of the illustrations that Strickland reproduces are "empirically" rather vile. They are motivated by hate and prejudice. Yet they are also strangely haunting aesthetic objects, awakening human desire and making monsterization seem a work of art. Strickland does a brilliant job of researching the cultural worlds that produced these images, and she expertly traces the historical inheritance of each image as well as its potential innovativeness. If she had only said a bit more about how desire works in these images, and about how a powerful ambivalence often lurks beneath every depiction of the monster, she would have moved a little closer to her stated goal of helping to bring about a world in which "being 'otherwise' eventually might come to be more respected than despised" (20).

Saracens, Demons and Jews is a rare book: impeccably researched, crisply penned, provocative in its findings, and handsomely produced. It will provide any readers interested in the long history of how humans have denied humanity to their fellow beings much to ponder, and probably leaving them wondering why so little has changed in the course of a millennium.
Posted by Jeffrey Cohen at 7:11 AM

Have to grade papers, and suffering under a cold, so I can't give this post the comment I want to. Here's a few initial stabs:

If you recall, when does Strickland place the earliest pileum cornutum? I've an article by Ruth Mellinkoff (in 1973) on the Jewish hats in Cotton Claudius B.ix, which is an OE version of the Pentateuch and Joshua. Now, these aren't actually the pointed hats. They're round caps, and only the Jews beginning with Aaron (i.e., post-Law) are shown wearing them. It's interesting to me that these hats would show up in an England is all likelihood without a Jewish settlement and possibly without a strong anti-Jewish intent.

Stab Two: has anyone done disability studies yet with medieval monster readings? I've got a longish bit in my diss. on the normative human body as a manifestation of reason that alienates this body from the human by making it the body of an abstract quality (reason, etc.) rather than of the human, yadda yadda yadda, and I realized that when this thing becomes a book, I want to bring in contemporary theory on 'abnormal' bodies. Does Strickland do this?

Stab Three: Do you buy the narrative of things getting worse for monsters as they become more and more associated with increasingly loathed non-Christian groups? I'm suspicious of most of the big narratives (see: Joyce Salisbury on animals) and this strikes me as yet another one probably meriting my suspicion. I can't help but think of the monsters in Pentacost contexts carved on Cathedrals or the semi-comic giants of the William of Orange epics, Aucussin and Nicolette, or Bevis of Hampton, or the various monsters that end up in the retinue of Duke Ernst: all these tales are contemporary with or post-date the beginning of the period of pogroms.

I'm with you, Karl, in your suspicions about the "things got worse and worse" argument. Salisbury is a good case in point, with that huge thesis about cultural change in perceptions of animals.

Things were never that great for the Jews to begin with -- even before the Jews startled to settle in England in the wake of the Conquest, plenty of anti-semitic stories had paved the way for a bad reception. I suppose the argument could be made a bit more convincingly with the Welsh and Irish, though, who did face a transformation from allies to barbarians. But enjoyment was ALWAYS part of the equation, and that's what complicates simple progress (or denigration) narratives.

As to disability studies and monsters in the Middle Ages, there ought to be more work that makes use of this innovative field. Bettina Bildhauer and Robert Mills gesture towards it in their introduction to The Monstrous Middle Ages (see n68, citing Rosemarie Thomson), but I'm not aware of much out there that uses other scholars' works, like Berube. My colleague here at GW, Robert McRuer, works at the intersection of queer theory and disability studies; it puzzles me that that confluence hasn't happened in analyses of the Middle Ages.

Finally, about the pileum cornutum: they are all late in Strickland (12thC and later). Several are pointy hats that designate non-Jewish characters as evil.