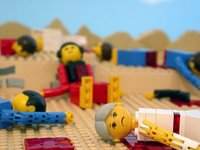 [update 12/21: welcome visitors from BuzzFeed. You'll find quite a bit on this blog about interspecies relations by searching "animal" next to the Blogger button]

In completing my thread of posts on medieval animals, I'd like to return to the venomous toads of last week.

I gave two twelfth-century British examples of these amphibians: swarming man-eaters in Gerald of Wales, and poisonous dungeon lurkers from the anonymous Peterborough Chronicle and Thomas of Monmouth's Life of St William of Norwich. Both these kinds of toads are easy to transform into historical allegories.

Gerald traced his ancestry from a Norman family who had been enthusiastic colonizers of Wales. To solidify a new dominion, these conquistadors had intermarried into the local royalty, producing hybrid (Norman-Welsh) children. Gerald's anthropophagic toads are a common trope in the literature of colonization. A land that is being subjugated by newcomers is imagined to be capable of devouring its occupants. The expression of this anxiety -- or fantasy -- goes at least as far back as the Hebrew bible, where the spies sent by Moses into Canaan return with stories of indigenous monsters and a country that can engulf its settlers ("The country we explored will swallow up all who go to dwell in it. All the people we saw were giants [Anakim]," Numbers 13:32). Contemporary versions of the trope mostly involve cannibalism, but see the recent film King Kong for a spectacular version of the foreign land where native fauna devours new arrivals.

The poisonous toads are, I think, more specific: not subtle allegory at all, but the kind of symbolism that beats you vigorously over the head to ensure that you get it. The metaphoric poison of the civil war between Matilda and Stephen finds its creepy embodiment in the lethal toads of the Peterborough Chronicle and Thomas of Monmouth. Their shared setting is also important: both tell narratives that unfold in the dungeons of castles, architectures linked in the English mind to conquest and upheaval. The strife that the two claimants for the crown engendered resurfaced Conquest-induced traumas and anxieties that had gone dormant. The toads, serious creatures as venomous as asps, embody the return of this perturbation over national community and its limits.

Yet does every animal have to be reduced to a human story?

Our bodies are coral reefs teeming with polyps, sponges, gorgonians, and free-swimming macrophages continually stirred by monsoon climates of moist air, blood, and biles. Movements do not get launched by an agent against masses of inertia; we move in an environment of air currents, rustling trees, and animate bodies ... Our legs plod with elephantine torpor; decked out fashionably, we catwalk; our hands swing with penguin vivacity; our fingers drum with nuthatch insistence; our eyes glide with the wind rustling the flowering prairie. ("Animal Body, Inhuman Face" Zoontologies 165-82, quotation at 167)

Donna Haraway, former theorist of cyborgs, current theorist of interspecies comminglings, similarly writes that dogs – like any animal that has become our queer companion – "are not about oneself ... They are not projection, nor the realization of an intention, nor the telos of anything" (Companion Species Manifesto 11). The multiplicitous interrelationships in which animals and humans find themselves entangled amount to "ontological choreography, which is that vital sort of play that the participants invent out of the histories of the body and mind they inherit and that they rework into fleshly verbs that make them who they are." (100). Derrida's l'animot , Lingis's oceanic humanity, Haraway's companion species: an invitation to explore a spacious corporeality beyond the specious boundaries of the human, to invent through alliances with possible bodies a monstrous kind of becoming that carries history within but which is not reducible to historical allegory, cannot in the end be sorted for its use value.

Sir Gawain and the Green Knight features a protagonist's movement across similarly animated geographies. In that somber errantry we can see not just an instance of the pathetic fallacy, where anthropocentrism leads a human author to glean nothing but human meanings from a non-human landscape, but what the philosopher Gail Weiss has called "embodiment as intercorporeality," can see the ways in which our very identities are dispersed across the relations we form (Body Images: Embodiment as Intercorporeality ) Even better, this vegetal and animal dispersedness could be termed an interspecies alliance, the mode by which a knight of the Arthurian Court can share his sorrow at the world's chill with birds who huddle in winter misery. These animals give voice to their sadness in a language that, while not human, is also not so very difficult to understand:

The hazel and the hawthorn were all intertwined
With rough raveled moss, that raggedly hung,
With many birds unblithe upon bare twigs
That peeped most piteously for pain of the cold.
The good knight on Gringolet glides thereunder
Through many a marsh, a man all alone. (744-49)

We know already that this last line must be untrue. Despite what at first glance appears to be his somber solitariness, Gawain's subjectivity is entangled in hazel and hawthorn, his embodiment completed by shivering birds, his knightly identity inseparable from his good steed Gringolet.

Sir Gawain glides through a world alive with flora and fauna, a world where he can never be "a man all alone."


(Much of this post taken from my essay in progress, "Inventing with Animals in the Middle Ages." Comments welcomed. The image of slaughtered Lego Anakim that begins this post is taken from the stunning Brick Testament of the Rev. Brendan Powell Smith, specifically here)
Posted by Jeffrey Cohen at 1:06 PM

[here, Evans begins "a chronological list of excommunications and executions of animals from the ninth to the nineteenth century"]:
"A few early instances of excommunication and malediction, our knowledge of which is derived chiefly from hagiologies and other legendary sources, are not included in the present list, such, for example, as the cursing and burning of storks at Avignon by St. Agricola in 666, and the expulsion of venomous reptiles from the island Reichenau in 728 by Saint Perminius." (Evans, 265)

Intermarriage a kind of production that is a swallowing up, too, in the way that what results is a new creature of an intermingled genealogy that is not quite either one of its progenitors.

Their shared setting is also important: both tell narratives that unfold in the dungeons of castles, architectures linked in the English mind to conquest and upheaval.

Just a note: internal spaces that are the unseen centers and foundations of these structures, which are nevertheless hollow spaces that weaken the foundation

Since we are animal, we don't carry an animal within except in the sense that we deny animality. I offer this point only as a correction of nuance, because I think the metaphor of inner alterity isn't useful enough: alterity crawls over our surfaces and extends them both into us and out into the world beyond our comprehension, restlessly undoing whatever limit we want to set ourselves, most signally undoing the boundary between inner and outer.

With that in mind, what the Lingis offers is a way out of the impasse of imagining that by “recognizing our animality” we return to ourselves a reunified self previously split by our refusal to include “our animal part.” Instead, his point seems to be (and here I'm just restating your point about scattering the human) one directed against all boundaries of self through his recognition that the purportedly separate, self-sustaining human subject operates within, with, and via a multitudinous, irreducible set of creatures who accompany us always, allow us to be, and are, for the most part, unknown to us; and we are probably as unknown to them as they are to us. It is not that we are animals; it is that I am animals and thus cease to be an I. This relationship between these animals cannot be classed as symbiotic but rather as a shared, and ever shifting, being comprising innumerable things that are only in a system of relationality, disclosing that being, far from being merely an inert, isolatable noun, is rather always and only a gerund (and so I stumble into a kind of subjectless pantheism?).

Again, not that I'm saying anything you're not. I just think that the metaphor of innerness suggests an esoteric truth, a core to be uncovered, and the idea that there is an inner somehow separate from the outer: that is, an operation of allegory.

Instead, just a suggestion, could we think in terms of typology rather than allegory? In allegory, the sign seems to drop away once we realize what it signifies, whereas in typology, the sign persists. This suggestion is as far from perfect as it is from being worked out; and the immediate problem seems to be that the in typology the thing being signified dominates once it is disclosed (i.e., in large part, once interpreted, the meaningful of the Ark is primarily its anticipation of the church...): hell, I dunno.

Karl: wow, this is good stuff. Will you be my ghostwriter?

Love the points on intermarriage, undergirding/undermining function of dungeon space -- and especially the important clarification of Lingis. You are so right about is movement away from weary dualities like inner/outer. I wish I'd never used the word inner -- it was really far too medieval, and not fithful to Lingis or to the actual vectors of SGGK.

I don't know about typology rather than allegory, since Christian typology is so bound up in Christian confidence in supercession. How about something more active and deleuzian, like "line of flight"?

What a kind thing to say!

I agree to be the spectre that's haunting Cohen, but given your productivity, I think ghosting you would ending up ghosting me.

The whole genealogy thing, btw, is something I've been working out a bit for my reading of Des Grantz Geanz, which, someday, I'll get out into the world in a completed form.

But first there's the whole blasted finishing the diss. thing, which requires that I limit my pleasures: for instance, I saved up commenting on your blog for a week until I'd plowed my way through my grading.

You're right. Typology doesn't work. For your suggestion, I'm tantalized but also totally lost because all the Deleuze I've read are his scattered things about animals and becoming. With that in mind, my project for subway reading for the next six months is just developing professional competence in the big names: so I read Agamben's State of Exception, finally read the whole of Foucault's first volume of the History of Sexuality, Sarah Kay's intro to Zizek, and now, rereading Location of Culture, but with a better understanding. Sheesh. Deleuze and G. are on the list, I guess, but I also realized the other day I know nothing about Habermas, which means I don't get about 1/2 the jokes on Bérubé’s site.

Too much to know!