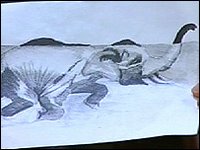 Astute readers of this blog will know that lake monsters had their brief thread of discussion here (search "Nessie" and you will learn something about the preferred reading of Kid #2, an aspiring cryptozoologist). JKW, an astute reader and someone who seems to find something odd every time he hits the internet, sends the following story from the BBC:

Unexplained sightings of the Loch Ness monster could have been elephants enjoying a swim, a scientist has said.
Neil Clark, curator of palaeontology at Glasgow University's Hunterian Museum, spent two years researching Nessie.

He said they could have been circus elephants, as fairs visiting Inverness would often stop on the banks of Loch Ness to give the animals a rest.

To which I must respond: why can't someone pay me to spend two years concocting theories like this one?

Now, because this blog is educational, and to give its fluff a patina of scholarship, here is the first sighting of Nessie, spotted by St Columba (c.521-97) at the banks of the River Ness:

When the saint stayed for some days in Pictland, he had to cross the River Ness. Reaching its banks, he saw spome locals burying a corpse. They told Columba a water beast had snatched and savagely mauled him while he was swimming ... Columba astonished these men by ordering one of his companions to swim across the river and sail back in the little boat on the other shore. The companion obeyed immediately, took off his clothes and dived into the water. The beast was deep beneath, still hungry for prey. It sensed the swimmer's disturbance of the waters and swam quickly towards the surface, mouth open and roaring furiously. The man was only in midstream. All the bystanders froze in terror, but Columba raised a hand, made the sign of the cross, and commanded: 'Desist. Do not touch the man. Go back immediately.' At the sound of the holy voice the beast swam away in terror, as quickly as if ropes had pulled it away.

The heathen Picts who witness this miracle convert, of course, to Christianity. Funny how by the time Nessie arrived in the 20th century, she had gained a gender (how does anyone know she's a she?) and lost her bloodlust.
Posted by Jeffrey Cohen at 8:05 AM