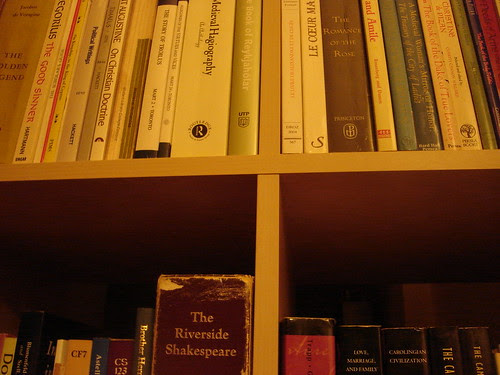 Be aware of the discussion here, where JJC at last steps into the most recent animals discussions; and don't forget (to fantasize) the past: Dinosaurs!
==
We watched the not so good documentary Derrida the other night (if you want a good postmodern documentary, try The Watermelon Woman; what a good poststructuralist documentary would look like, I'm not sure: any suggestions?). Whatever the faults of the film itself, the subject himself charmed the bejeezus out of ALK and me (having recently seen another documentary about a contemporary philosopher, we at least got a sense of which one we would trust as a housesitter. Hint: not the one who might put up a quasi-ironic poster of Stalin).

The interviewer at one point asks JD one of my least favorite questions. Looking at his walls and walls of books (hilariously focusing on two Anne Rice paperbacks), she asks him if he's read them all. For years, my response to this question has been, "No, but I've used them all." Clever, yes? Okay, more precious than clever. Surely we can't say the same thing (or can we?) for Derrida's wry, "3 or 4. But I've read those very well." Forgive me (or better still, correct me) if I misquote.

(Extra special bonus feature for lovers of Derrida's work on animals: his cat? The one that stares at him naked? It meows at the camera. Cute.)

If you're in a talkative mood, let's talk about the least favorite questions we get as readers and/or academics. If you're feeling generous or humane, turn off the irritation and wonder at the questions. Do what you do best and kvetch analyze.

(this post must be paired with this one, especially the "Sat. Morning Update")
Posted by Karl Steel at 8:24 AM

Karl, your riff on books, shelves, and "use" reminded me of Benjamin's riff on unpacking his personal library, about seeing the books on the floor rather then in their usual place within the boring order of the shelf. Now I'm wondering if there was something a bit awry about those Anne Rice books on Derrida's shelf.

He explained that a student had given him the Rice because of one of his seminars on vampirism and cannibalism. Michael O'Roarke turned me on to what I think was the second cannibalism seminar, which dealt with Novalis, incorporation, and what cannot be incorporated, that is, shit. Nothing about vampires in that, so far as I recall, so there's more to come.

When people ask me if I have read all the books on my shelf, I always answer "Are you crazy? I've written books that I haven't read yet!"

David Farrell Krell who annotates/summarizes Derrida's seminars on cannibalism was not present at all of those seminars in 1990-1991. I think, in fact am near certain, that the seminar mentioned in Kofman and Dick's Derrida has to date to that period. But we must await the appearance of the unpublished seminars right up to the last one on the beast and the sovereign.

My favorite moments in the film are the ones which focus on Derrida's severed or disembodied hands. There are some wonderful outtakes too: one in which Geoff Bennington talks about JD's driving, another where the screen is split in a visual reference to Bennington's Derridabase and Derrida's "Circumfession". Btw there's a beautiful book which includes the screenplay, color stills, essays (including ones by Nick Royle and Geoffrey Hartman) and interviews.

If you want to adjudicate in JJC's house sitting dilemma take a look at Edward O'Neill's review of Zizek! and Derrida, "Ecce Homo" in the penultimate issue of Film_Philosophy (http://www.film-philosophy.com/).

Clearly if he is to be a good Derridean JJC will have to welcome the mad Slovenian into his home, throwing open his doors, his borders, and his penetrating eyes!

Great picture of the bookshelves, Karl. It reminds me of how many more volumes I have to obtain before I have a satisfactory library.

Perhaps one of the most puzzling questions I get is when people ask me to recommend a book or two to them to read. This occurred at the end of the past semester, as some of my friends were compiling summer reading lists. Being an English major, I should love this question--but I'm always taken back by it. Only one or two? I can never choose: Fiction or non-fiction? Should I recommend all of my favorite medieval works? I seem to have an underlying anxiety in answering this question, and can never quite think of which books are the best to pass on. Perhaps it's just a personal problem, like a psychological disorder--such as book recommending anxiety or obsessive compulsive recommendation inability.

So you liked the film? I liked what it was trying to do, but I just thought it incoherent. Thanks for rec'ing the essay: downloaded, and as it's short, I'll read it right now.

Perhaps one of the most puzzling questions I get is when people ask me to recommend a book or two to them to read.

Funny, I never get that. What would I recommend? I can't see recommending medieval, I think precisely because of (what passes for) my expertise: I'd want to give them too much. I'm more inclined to suggest No Bed for Bacon.

Irritatingly enough, neither does ALK, even though she's the one who reads (and writes) contemporary fiction. People always want to rec books to her.

Thanks for rec'ing the essay: downloaded, and as it's short, I'll read it right now.

Hm. Reviewer seemed to miss (out on) Zizek's playfulness: rather too distracted by the shirtless Zizek, or the dilations on shit, and, in the last graph, taking literally Zizek's description of his psychological trick to avoid writer's block is, well, kind of obtuse. Also missed out on what I found most delightful about JD in his film. Anyone even minimally familiar with Zizek's work (e.g., me) knows that this filmic Zizek wasn't saying anything new. He wasn't trying out ideas. He was virtually quoting himself most of the time, engaging in that, er, autophagy or replication or hyperlinking or what you call it that characterizes his writing more generally (taking into account "minimally familiar &c"). By contrast, JD could be seen to think on camera. He pondered. He stumbled. He worked things out. He took a stupid question (the love question) and turned it into something beautiful. He said things I hadn't heard him say before. There's a difference there, surely, but it's not about filmmaking.

Spot on KS (who of course is not JJC--I saw bookshelves and the spectre of JJC appeared in Warholian multicolored palimpsest). The difference is between a philosopher with a cookie cutter who filters everything through the same Hegelian-Marxist-Lacanian matrix and one who responds patiently, generously, generatively (not that Derida doesn't repeat himself, he does, a lot). But every event elicits the same response from Zizek calculated in advance, pre-programmed, absolutely predictable. While Derrida patiently , almost hesitantly, attends to the event in its singularity (9/11 is a good example), Zizek doesn't take time to respond and oddly books on/interviews with Zizek don't force him too. So, he gets away with the cut and paste method again and again. Sometimes, he even pastes the same paragraph twice at different points in the same book. BUT check out Paul Bowman and Richard Stamp's The Truth of Zizek which seriously takes his work to task on its own terms. Zizek's long and very angry response(if you can call it that) is hilariously entitled "With Defenders Like These, w
Who Needs Attackers?" That said, The Parallax View, which he calls his Magnum Opus, is an extraordinarily helpful summary of all his books since Sublime Object of Ideology. So, the good news Karl is that you only have to read these two!

So, the good news Karl is that you only have to read these two!

Aargh. Too late. I've read Enjoy Your Symptom (new edition), Plague of Fantasies, Welcome to the Desert of the Real, and a few essays ("Eastern Europe's Republics of Gilead" and "The Supposed Subjects of Ideology" and probably one or two others I don't recall). And just yesterday, along with E. Grosz's Volatile Bodies and Bersani and Dutoit's Forms of Being, I checked out Looking Awry. I'll return the latter one and buy the Parallax book...)

Why is it readers imagine reviewers "miss" things--instead of just disagreeing? Need I be "obtuse" if we simply see things differently?

Karl Steel thinks I "miss[ed] (out on) Zizek's playfulness." I didn't miss it. I just found it tiresome and uninteresting.

And yes, Zizek's shirtless appearance and dilations on shit were indeed distracting.

Am I an old fart for thinking that a more serious person wouldn't do such things?

Then again, Pervert's Guide is playful, too, but there SZ has a good director to handle him. Zizek's own ideas about how to film himself seem to me not very interesting. Since I'm not a fan (though I've read a half dozen of his books), I'd trace SZ's uninspired cinematic imaginings to a poor grasp of cinema--but others will see things differently.

I may be "obtuse" (as Karl says) in not taking Zizek's description of his writing procedure playfully enough. But then I take what he says quite literally, and it seems to me (as I wrote) a good explanation of why Zizek's simply not a good writer. (No, I'm no fan, as I've written.)

I agree Derrida thinks aloud before the camera. But for me this suggests Zizek's just packaging himself, and perhaps I'm still naive enough to imagine that philosophy might have some depth and not just be a question of endlessly promoting oneself--like a brand.

But such differences *are*, I would argue, about filmmaking as soon as they enter into a film or video, because the filmmaker then must do something with and about what's being filmed.

If that makes me more Cavellian than Zizekian, so be it.