Murder, French Fries, and the Perverse Genre of the Lowbrow Tragi-comedy 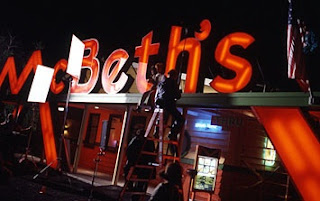 To be human is to know both what one is doing and why one is doing it.--Anthony Giddens, from Modernity and Self-Identity

Karl has asked us about first-week teaching experiences [see here], and while I don't have any "aha!" or "perfect pedagogical" moments to share, I thought it was interesting [but perhaps not unusual] that Karl and I are both teaching Sir Gawain and the Green Knight the first week. I typically begin with this text at the outset of my British Literature survey course [which begins in the Middle Ages and ends at 1789], bypassing both Beowulf and Chaucer and going straight from SGGK to a Shakespeare triptych [Titus Andronicus, Macbeth, and King Lear], then on to Milton [Paradise Lost] and Swift [Gulliver's Travels], with a lot of Woody Allen thrown in along the way [seriously: mainly Love and Death, Crimes and Misdemeanors, and Match Point]. I've ditched the anthology-style approach for something a bit "deeper" [fewer longer and "whole" works over bits and pieces of this and that for the sake of broad "coverage"], and I've struggled over the years with devising some sort of "theme" or set of interpretive questions that would tie these disparate works together in such a manner that students could [maybe] see how certain works of literature [situated in disparate places and times] address, in compelling fashion, particular aspects of "human" nature/human "being." To keep things interesting for the students, I typically focus on works in which violence [primarily murder] and/or sexuality are key components [are there any other subjects, in the end?] and then try to connect those works to each other under the rubric of something like, as in this semester, "Be(coming) Virtuous, Be(coming) Human." [I'm never quite happy with these thematic rubrics: last semester it was "Goodness, Violence, and Being Human/Bear," where we ended the semester with Book IV of Gulliver's Travels and Werner Herzog's documentary Grizzly Man.]

To the real point of this post: I always feel obligated in a course that concentrates heavily on Shakespeare [for me, anyway] to spend some time with the students explicating what is meant by "comedy" and "tragedy" [in all of its manifestations, classical, medieval, and beyond], and I can always see their eyes glazing over as I'm going "blah blah blah blah blah Aristotle Sophocles blah blah blah blah." For a while I just skipped over the question of "genre" altogether and went right to "the story": after all, am I trying to get these students [who are mainly taking the course as a general education elective] interested in literature, or what? I could save a deeper consideration of genre for the English majors in other courses and leave it at that. But when I saw Billy Morrisette's film Scotland, PA [a hilarious lowbrow adaptation of Macbeth set in a fast food restaurant in the middle of nowhere in 1970s Pennsylvania], the question of whether or not to "teach dramatic genre" came back to haunt me [and also helped me to better appreciate the moral complexity of the original play]. I started to realize that genre was not just a stale [and possibly] empty placeholder of a literary classificatory scheme, but was the very mode through which affective and dis-affective orientations to the world are both expressed and cultivated. By god, I thought to myself, genre is about meaning after all! [Insert Homer Simpson's "d'oh!" here.]

Every now and then I write short [what I call] "working papers" for myself that I don't ever intend to publish or necessarily even show to anyone, in which I work out ideas about writing and teaching--one of these, on writing fiction, which partly grew out of some of the disillusionment I experienced when I was a resident [in 1999] at the annual two-week Writer's Conference at the University of the South in Sewanee, Tennessee, you can see here: "Where to Begin: Notes to Myself as a Writer" [I was there studying fiction writing with Alice McDermott and Rick Moody]. I might occasionally present these papers, then I put them away, and return to them just to refine a few ideas, and move on. Last fall, I wrote one of these on trying to deal with my anxieties about teaching the classical genres of "comedy" and "tragedy," under the influence of having taught Scotland, PA alongside Macbeth in the survey course, and I presented it at the annual Midwest MLA meeting, then shoved it away. Then I watched Woody Allen's Match Point, and pulled it back out and reworked it some more. When I begin the survey course, in the one or two days before we start SGGK, I show a series of film clips that I tell the students are meant to frame the "moral questions" that will guide our readings throughout the semester: I typically cull these from a variety of Allen's films, but also from a little-known and never-released-in-the-U.S. gem of a film: Ripley's Game, starring John Malcovich as the eponymous sociopath Tom Ripley, a character created by the novelist Patricia Highsmith who some of us are mainly familiar with from Hitchcock's Strangers On a Train and Minghella's The Talented Mr. Ripley. Ripley's Game concerns Ripley "in retirement," so to speak, when he plays a sort of "game" with a neighbor who is "a complete innocent," but whom Ripley believes can be convinced to commit murder [and then some]. I also show them the clip from Apocalypse Now when Capt. Willard [Martin Sheen] finally gets his "interview" with Col. Kurtz [Marlon Brando], where Kurtz tells Willard, "You have to have men who are moral...and at the same time who are able to utilize their primordial instincts to kill without feeling...without passion...without judgment...without judgment. Because it's judgment that defeats us." It's a great set-up for SGGK [again, I hope].

So, I thought I would share with everyone here my random musings on dramatic genre, vis-a-vis Macbeth, Scotland, PA, and Woody Allen, and as I am currently teaching this survey course [for the gadjillionth time], any suggestions regarding how I might refine my ideas, would be really meaningful to me, especially as I will teach this course every year and consider it an important course for getting non-English majors to see how relevant literature is to "real life."

The part of this many-tentacled post that grabs me most is your description, in your notes to self, of the space between self and product as a vacuum, a vacuum that can only be filled by self-giving labor, so that in the case of food the horror vacui is the absence of our being in the food we eat, which appears as a loss or fall from something like labor's originary cannibalizing structure: spending ourselves to sustain ourselves to spend ourselves, a productive self-ingestion that wastes to win.

My recent musings on the nature of the hand are leading me to an understanding of this vacuum as an ineradicable and foundational feature of embodiment, of our always being between self and body, and the vital role (vital since the human is itself a creation of labor, cf. your Giddens epigraph, though I would want to seriously qualify that strict notion of intentionality, teleology, as Karl said, bowling!, the other night, "I can't do anything on purpose") labor plays in confronting and overcoming the problem of embodiment. The problem of labor (labor's being a problem) is the problem of embodiment is in turn the problem of the animal/human boundary.

Thanks for sharing all this, EJ. I don't have any big or helpful suggestions, I'm afraid: for what reasons I don't know. But this really struck me.

Yes! The problem of a murder one gets away with (Match Point) and its intersection with the problem of morality. Someone I want to connect this to the problem in SGGK of the court of Arthur never understanding, or deliberately NOT understanding, what Gawain undergoes. A deadly contest is only a Xmas game for Arthur (or, as my students suggest: Arthur knows perfectly well what's going on, but he's finally showing himself as a leader ONLY when it comes to saving face), and Gawain's moral humiliation becomes an amusing badge of the court. Gawain's private terror and private grief, hemmed in by the practices of the court (whether Arhur's or Bertilak's) that can comprehend neither of these emotions or fundamental conditions of being, seem to me, right now, central issues for the poem. In other words, I think I just figured out tomorrow's discussion for Fitt II (which is otherwise a Fitt in which, comparatively speaking, not much happens): so, thanks.

How I get back to connecting this to morality and murder? Perhaps, if I were teaching Match Point along with all this, via the film's class issues: the family into which Jonathan Rhys Meyers marries admires his vim and vigor, but to clamber up into the upper classes from the lower classes requires a coldbloodedness that the upper class simply can't comprehend or, if they imagine themselves comprehending it, they transform it from sheer terror and desperation into the somewhat more comforting realm of narrative. Something like that.

PS: I'm teaching Lear in my morning survey, the one that starts with the C. Tales. So, yes, overlap.