In Praise of Surfing and Epicureanism: Postcard from Seal Beach, California Every now and then I like to give myself permission to do something that is decadently counterintuitive, so with mid-September deadlines looming for, respectively, an N.E.H. grant, two sets of page-proofs and an Index for a special journal issue and a volume of essays, paperwork for revisions to my department's B.A. program, a proposal to co-teach a new interdisciplinary course to about 200 first-year students next fall, titled "The Homeric Dream" [thank you, Michael Moore, for the idea], and a new book proposal for a volume of essays on BABEL's ongoing "humanisms" project, I decided to leave town with suitcase in tow [and no work] in order to celebrate my 45th birthday in Seal Beach, California with BABEL co-conspirator Betsy McCormick for an extended Labor Day weekend of surfing [well, I just watch Betsy and girl posse do that], eating, and drinking, with an outdoor blues festival featuring Little Richard as well as Justin Timberlake's HBO live Futuresex/Loveshow thrown in for good measure. Indeed, may I just note here that if anyone doubts that Justin Timberlake may represent the future of popular music in America, run don't walk to a viewing of this show which almost blew my mind and no I wasn't just drunk [the next viewing is this Thursday at 8:30 p.m. eastern time].

Epicurus once wrote that, "We have been born once and cannot be born a second time; for all eternity we shall no longer exist. But you, although you are not in control of tomorrow, are postponing your happiness. Life is wasted by delaying, and each one of us dies without enjoying leisure." Although some suspect that I am workaholic, even a frenzied and manic schemer of scholarly projects, I have always prided myself on the art of the lost weekend [which can be accomplished even when one is at home]. The best ideas, I have found, are best stumbled upon, not in the midst of the hectic hustle of the everyday, but when one is doing practically nothing at all, or nothing more strenuous than lying in a hammock or sitting in a porch chair staring at the clouds or reading something, not for pointed profit but for profligate pleasure. One must practice the art of stealing into movie theaters in the middle of a weekday or going on a bender with your favorite bartender on a Tuesday evening [which bartender, if you're really lucky, will reveal to you his "other" life] or going to the art museum on a Friday night when no one is there just to lay down on a couch next to the Mark Rothko, but be sure to leave before one of the security guards begins to wonder if you're homeless. Instead of getting up early on a Saturday and going to the gym, which would be good for you, after which you were planning to grade some papers and work on that book chapter that is half-finished, break out the boxed set of [insert your favorite filmmaker here] and watch the movies end to end with bottles of wine and cellphone in hand to order [pizza/Thai food/insert your favorite take-out here]. For me it's Woody Allen's Manhattan/Annie Hall/Hannah and Her Sisters/Everyone Says I Love You. Or Charlie Chaplan's Modern Times/City Lights/The Great Dictator. When it's Sunday and now you really should be more serious about the gym and grading those papers and attending to that half-finished chapter, sneak out of the house and go to the botanical gardens when the cherry trees and foxgloves are in bloom or when the leaves are turning or when everything is bare and you can see the secret architecture of the landscape. Watch the other people there with the same intensity that you contemplate the plants. Try to imagine their secret lives. Afterwards, go to your favorite restaurant and indulge yourself in a bottle of [Sancerre/Vouvray/Voigner/insert favorite French wine here--yes, it has to be French!] while flirting with your favorite waiter/waitress and reading Vanity Fair or Vogue or [insert your favorite silly glossy magazine here]. Go to the Zoo afterwards and spend some time with the penguins--no one is more "chill." Go home and watch DVD episodes of Will & Grace or Mary Tyler Moore or Newsradio or The Office or [insert anything here that will make you laugh]. Wake up in the morning seized with a sort if panic but knowing it [meaning: the "nothing" you accomplished] was all worth it.

Every now and then, go somewhere that is very different than anywhere you have ever lived, like, um . . . Seal Beach, California [where not much has changed since about, um, 1955]. Marvel at the crisp blue-iness and clean snap of the place and its sheer laziness. As you sit on Betsy's front porch [one block from the ocean] drinking beer after beer after beer after beer, note the surfers and skateboarders not walking but somehow gliding down the street and how quiet it is. Drink in the scent of the blooming jasmine vines and let your eyes be pierced by the hot pinks and oranges of the bougainvilleas. Go in search of the ultimate dinner, night after night, even if it means driving to Irvine to [gasp] the South Coast Plaza Mall because that is where the French chef Florent Marneau has decided to set up his restaurant Marché Moderne, where you will dine on a gentile ham, humboldt fog goat cheese, and asparagus oven tart, an artful charcuterie sampler [which includes duck prosciutto], and salads that cannot be described, except to say that you begin to believe in god again [or at least in boutique agriculture] and this after having spent the previous evening digging into this: 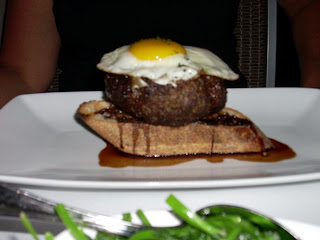 But unless you are a really good writer on food [and you are not], shut up about it and just eat. While slightly intoxicated, go shopping at H&M and Zara because Betsy told you it was stupid to shop anywhere else, and since you're already in the mall. Go to see the stupidest ["stupider than stupidest"] movie you can think of: Superbad. [Indeed, it is "superbad"; perhaps only men can love this movie, but to assuage the pain of the money lost at the box office, drink more beer and marvel at the stupidity of men--sorry guys]. Dance at the blues festival with Betsy's friend Mary who used to be a ballet dancer and realize that you really never knew anything about dancing your whole life, and this after at least ten or so "pink cadillac" magaritas. Hang out at Taco Surf with the girl surfers and drink pitchers of margaritas. Study sunsets and learn shortcuts through alleys that connect favorite bars on Main Street to Betsy's house by way of the "crazy lady" house with the twenty or so garden gnomes, each of which is lit under the glow of its own Tiffany-style lamp. In addition to the more elegant dinners, eat miniature burgers and pizza and sandwiches from Nick's and coffee cake from Sweet Jill's and chicken-on-a-stick and polish sausage dogs and fried artichokes. Stay up late talking and talking and talking [and occasionally arguing] but don't try to solve any world problems. Politics are off limits, as are wars and global warming. Somehow, without knowing how, you end up at the airport in Los Angeles writing this blog post and realizing that you and Betsy spent the price of two plane tickets to Belgium on three dinners, and that doesn't include the ridiculous amount of money you spent just on one belt. But it is a cool belt.

And remember, every now and then, how to "get lost." Now back to work. But first, that plane.
Posted by Eileen Joy at 7:44 PM

Happy birthday! That is one fabulous "postcard." And now I want a margarita, dammit.

Here's to (raising my glass) abandonment.

Is Eileen a Sufi?

I am not a Sufi, but oddly enough, when I was getting my M.F.A., I took a class in west African fiction for which I wrote a paper on Sufism, Jean Paul-Sartre, Kafka's "The Castle," and Camara Laye's "Le regard du roi." So, although I am not a Sufi, I am a big fan.

Wonderful post, Eileen, but you left us hanging a little bit: how is Little Richard in concert these days? Can he still hit those shrill notes on "Lucille" and play a thunderously mean piano?

Little Richard's voice is a little shaky, but yes, he can still play a thunderously mean piano. He also said "shut up!" a lot, but sweetly.

Happy Birthday Eileen! I am fully in agreement with you about Timberlake. Its why Noreen Giffney and I had a conference called FUTURE*QUEER last year(unfortunately JJC couldn't come) with a panel entitled FUTURE*SEX in which I paid tribute to JT. Right now I am planning a paper on Rihanna, Badiou, Irigaray and sexual difference. Its called "Umbrellality". Timberlake and Rihanna: the new king and queen of pop.
MOR

Eileen, You ARE a nimble wordsmith; your blog really made me want to be there, and then I realized that hey, I HAD, in fact, been there. I'll say this to your readers and compatriots: you were also plenty nimble on the dance floor (dance grass?) with Mary, earning applause from your (admittedly margarita-soaked) fans.

It was lovely to see you and to share the Taco Surf life once again. We're going surfing tomorrow morning, but after the week of teaching we're all so tired that we might just lie down in the waves...

Good luck with all of your projects. Don't forget to follow your own epicurean advice.

And it was likewise lovely to see you again, Margie: same time next year? I think so.