Dissertation Fragments Part I: Horizons, or Two False Starts and an Abstract 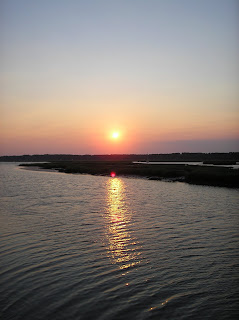 So as a part of my ongoing dissertation prospectus work is preparation for a talk I’m giving at Wake Forest in late November. I’ve been invited back by my undergraduate advisers (and continuing mentors!) Gillian Overing and Gale Sigal to speak to the Medieval Studies group – a group including professors and grad students from a wide variety of disciplines, including English, French, History, Italian, etc. I am, needless to say, incredibly pleased to be giving this talk – it’ll be a lovely homecoming, and I’ll even get to sit in on Dr. Overing’s Old English class. That should bring back some memories! It’s intimidating, to be sure: it is my very first “real” academic talk, invited and everything. However, it’s also comforting: Profs. Overing and Sigal read my undergraduate honors thesis. Whatever I say in this talk (which is now taking solid form in preparation for a workshop this evening), it can’t be more embarrassing, or less intelligible, than my 36 page aria on a 115 line poem, titled: The Exile and the Other: Male Voice and Psychological Landscaping in the Wanderer. My undergraduate masterpiece would be reworked a number of times in the following years, but the 2004 version will always be my favorite -- and the longest -- of its iterations.

By way of new beginnings, then, as I enter the stage of my career that begins with the end of my orals reading and ends in the scariest place on earth, I offer some first, discarded fragments that underlie the central idea of my talk (and also my dissertation), which will be titled: "On the Horizons of History: Writing (and Rewriting) Anglo-Saxon Collectivities." To show where I've ended up in more concrete terms -- and as to provide a preview of coming attractions -- I've also included the abstract I sent to Wake as a kind of advance warning. Part II of this series will, in all probability, be sections from the talk itself (suggestions for format welcome).

Think of these fragments as meditations, or perhaps as interconnected musings. Try not to think of them as the past I’ve tried to repress. Because really, that’s just so linear...

I: A Place to Believe In

In the introduction to the collection of essays in A Place to Believe In, Clare Lees and Gillian Overing introduce the work of “gathering” that the essays perform in what they call a “meditation” on “the idea of Northumbria and its horizons, whether historical, cultural, or geographic” (7). Using the definition envisioned by Michael Casey’s “How to Get from Space to Place,” they define horizons as the [foundations] which “form the perceptual basis of boundaries [that] are themselves spatiotemporal in status. To be in perceptual field is to be encompassed by edges that are neither strictly spatial—we cannot map a horizon (even if we can draw it)—nor strictly temporal” (43, cited in Overing and Lees 8-9). In their thoughts on space, place and time in the Northumbrian landscape, Lees and Overing engage with the “crossroads” which place represents; indeed, the work of the authors in the collection are located “at the intersection of land and sea, or of space and belief; at the coming together of physical spaces and the bodies that inhabit and co-create them; and last but by no means least, at the juncture of past and present” (26). The horizon becomes a symbol of the possibility of continuity, perhaps even coexistence, in the present of memories, objects and writings of and from the past. The horizon, then, has much in common with a liminal space—“the horizon is porous, its boundaries shifting” (24). In the context of place, this interpretation allows Overing and Lees to imagine their own coexistence with Anglo-Saxon past which they can quite literally see, surrounding them in the landscape that encompasses Yeavering, Bamburgh and Lindisfarne. The concept of time, however, is more difficult. Alternate times—and Other histories—persist, but the horizons of history cannot help but function differently from those of the Northumbrian Landscape.

II: Order of the First Chaos

In the first calens of Ovid’s Fasti, another type of horizon might be considered, in the figure of Janus. Janus is the two-headed god of gateways (I.65). However, Janus also delimits a boundary: his most vital role is as not only the god of gateways, but also as the god of the first Chaos. When he was first formed, “yon lucid air and the three other bodies, fire, water, earth, were huddled all in one.” (I.105-6). He looks both forward and backward at the same time, and thus he looks forward to the coming year, and backward to the year which has already passed. The conception of time laid out by Janus is cyclical—the order of each calendrical year both precedes and follows itself as a kind of promise of stability in the observation of months and celebrations. However, because he is the god that the “ancients called Chaos” (I.65), the dual sight of Janus serves not simply to demarcate the boundaries of the repeating calendrical year, but as a perpetual reminder that order is preceded by chaos, and that chaos is perhaps still present beneath order’s thin veneer. Significantly, Janus, née Chaos, also serves as the protector of order. “All things are closed and opened” by his hand; he asserts and he avers that “the guardianship of this vast universe is in my hands alone, and none but me can rule the wheeling pole” (I.118-120). Order is quite literally in the hands of Chaos, and the calendrical year offers but a flimsy stability at best.

III: Horizons of History (an abstract)

My current project, tentatively titled Horizons of History, examines what might happen if we think of an “Anglo-Saxon England” with fluid boundaries – embracing the possibility of a semi-permeable, ever-changing horizon as both boundary and event, forming networks of written “collectivities” that are not confined to a single historical period or outlook. Engaging with the theories of Mikhail Bakhtin, Bruno Latour, and Deleuze and Guattari, I wish to rethink the ways in which we conceptualize an “Anglo-Saxon” period via a sustained reading of historiographical material written on both sides of the Norman Conquest. My focus in this paper will be two-fold. First, it will serve as an outline and preliminary defense of the topic of my dissertation – positing both the possibility of a “Long Anglo-Saxon Period” in the Middle Ages, and examining what is at stake in thinking of the period in this fashion. The second part of the talk will offer an overview of how I see this horizon of history functioning the in the political/poetic corpus, focusing specifically on the Old English Orosius and Beowulf.

prehensel said...
This comment has been removed by the author.
10:04 PM

Very exciting stuff, MKH. Good luck returning to your intellectual home> I very recently had the experience, spending some time with two scholars at the University of Rochester who set me on the path that culminates here: Tom Hahn and Richard Kaeuper.

For Part I, there seems to be a lot of Nicholas Howe behind the ruminations as well. With its Northumbrian vectors, it's memories and desires, it reminds me of his essay "“From Bede's World to ‘Bede's World’: Medieval Text to Modern Site,” in the Bob Hanning celebration volume.

The Janus/Chaos link I am just in awe of. I'd thought of using Janus as the ITM mascot and have recently been starting at an image of a Janus-head Roman coin. That Janus could have been emptiness or void (isn't that what chaos means in Greek, rather than disorder?) is fascinating.

Good luck with your writing and presenting!

PS Have you seen this?

Anonymous said...
This comment has been removed by the author.
1:32 PM

Well, this just looks fantastic, MKH, and I hope you will share a version of your longer talk with us after your trip to Wake Forest. Really, really good stuff.

GGGS> Hm. Good point. I'll have to double check that at some point in A Place to Believe in.

JJC> I hadn't seen that post (or that blog!), nor have I had a chance to peruse the fetzschrift for Bob Hanning. One of these days. As for Janus -- that's fantastic. I wonder if there's a connection there, between the idea of disorder and the idea of nothingness -- why else fear it? I don't know -- I'm not familiar with the Greek etymology there. However, if I recall, Janus/Chaos is also an "unformed mass" of some kind. This reminds me how much I want to get back to the paper that rumination came from first -- written, coincidentally, for a seminar with Hanning three years ago (have I been in grad school that long?).

I'd be interested to hear what it was like returning to your intellectual home -- I feel like so much of the course of our interests and interests is sketched out, in broad lines, so very early.

I also think Janus as a mascot for ITM would be fantastic.

Eileen> Will definitely share a longer version, though I'd be interested to hear what people think might be appropriate as a way of abridging/altering the work for consumption here? I think parts will end up posted as a piece of my dissertation prospectus. Which is a fantastically frightening thought.

I also think Janus as a mascot for ITM would be fantastic.

For more on the void, perhaps you want to look at 12th-c. neoplatonic commentaries on the SILVA, the matter that resists form, although perhaps this is too far outside your bailiwick? You can find a good guide to some of this material in Eugene Vance, From Topic to Tale: Logic and Narrativity in the Middle Ages, 64-65.

I'd be interested to hear what people think might be appropriate as a way of abridging/altering the work for consumption here?

Can parts be paraphrased and the rest presented as is? Or you have three sections here: why not three posts?

MKH, Karl: I've added a Janus head coin image (AKA CHAOS) to our sidebar. What do you think? It isn't bioluminescent though ...