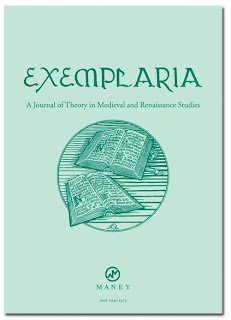 The blurb at the bottom of this post was passed along to me by the new publishers of Exemplaria. I place it here suspecting that many ITM readers will be interested in the free issue offer.

Exemplaria has been extraordinarily successful, pushing at the cutting edge of medieval studies for two decades. The journal has become such a desirable place to publish that the waiting time from acceptance to print has been as high as two years. Fortunately, the journal will now appear three times a year, spurring a quicker dissemination of work.

The journal owes its vigor to the extraordinary Al Shoaf, who along with the late Julian Wasserman founded Exemplaria. Though I knew him as a salutary force in medieval studies long before he invited me to become affiliated with Exemplaria, as a member of the Advisory Board for the past five years I've been impressed at what he accomplishes. Al will be stepping down as editor in 2010. In anticipation of this event, three new editors have been appointed: Tison Pugh of the University of Central Florida, Elizabeth Scala of the University of Texas-Austin, and Patricia Clare Ingham of Indiana University. They join James Paxson of the University of Florida for what Al Shoaf has described as "what must be the 'dream team' of journal editors in Medieval Studies for the next generation."

Next May, at the International Medieval Studies Congress in Kalamazoo, Exemplaria celebrates its twentieth year and twentieth volume by hosting a panel to introduce the new editors. We here at ITM wish all four of them well, and look forward to next two decades of this journal.

Exemplaria – A Journal of Theory in Medieval and Renaissance Studies
Exemplaria is a key force in medieval literary studies. 2007 special issues have been ‘In Honor of Sheila Delany’ and ‘Movie Medievalism’ and key articles include:

Posted by Jeffrey Cohen at 7:28 AM