A weight has lifted 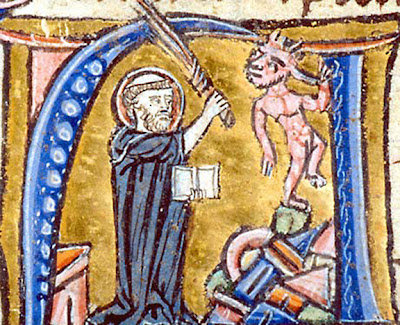 Last night I gave the Holloway Lecture at McDaniel College. Those of you who have been reading its fragments here at ITM know that "The Weight of the Past" is a rapid tour that commences in deep time, where ages are registered by the lives of rocks rather than the duration of organisms, and lingers over the interaction of pieces of distant history with medieval worlds. The talk's temporal trajectory endsmore than 10,000 years hence, in the Department of Energy's attempt to think beyond the extinction of English and of the USA. Nothing too ambitious.

The Holloway Lecture is a big deal on the McDaniel campus, involving a dinner at the President's House and a formal talk attended by just about anyone with a connection to the place. Every college should have an annual humanities event like this one. I could see immediately the good work it does in solidifying intellectual community.

My lecture went very well, helped in part by the extraordinary hospitality of Kathy Mangan and Becky Davis, as well as the contagious enthusiasm of a large group of students and faculty. Technology has recently turned against me: in the last month I have laundered my cell phone, lost my laptop to a thief, and had the navigator device in my car attempt to strand me at a distant farm. I was afraid that my parade of PowerPoint images would combust the moment I hit the PLAY button, but fortunately we were able to gaze at Barber Rock, nuclear warning architectures, Neolithic tombs, and even Albus Dumbledore. I don't usually use projected images when I deliver a talk, but this one really required them. The hushed darkness also gave a solemnity to the proceedings that was broken only occasionally by my famously bad jokes.

McDaniel College is bucolic, architecturally beautiful, an intense but nurturing place for students and faculty alike. I truly enjoyed my time there. The students are ardent blog readers, and knew many a post from ITM. They also love the Chaucer blog. I was asked many times during my visit to reveal the identity of tits author. I stated that I will die first -- and (in the absence of a very large bribe) I will.

I was so wired after the lecture that I didn't climb into bed until past midnight. I arose at 5.15, hit the road ... and spent two and a half hours in traffic, a particle in the wave of insane people who commute to Washington and Baltimore from the exurbs every day. I arrived at GW just in time to hear my colleague Gil Harris give a brilliant introduction to Stephen Greenblatt (did you know that Greenblatt performed with the troupe who became Monty Python, and is mentioned [as dead] in one of their classic skits?). Greenblatt gave an extraordinary talk about his collaboration with contemporary playwright Charles Mee. They have reimagined Shakespeare's lost play Cardenio, using the process of staging and translating that work to theorize cultural mobility -- and even imagining what "mobility studies" might be.

Thanks, ITM readers, bloggers, and commentators, for all your support and suggestions as I refined my ideas. The lecture would not have been nearly as good were it not for the community that congregates here.

(PS The image above is Augustine banishing a heretic, which I used in my talk as an image of what Augustine tends to do to annoying heterogeneity in his materials. The talk was also in part about winged demons and their gigantic progeny, so the illustration performed double duty.)
Posted by Jeffrey Cohen at 2:11 PM

Congrats on the success and fun!

(what's that mound of stuff in the corner below the demon? It is architectural or a pile of books?)

Architectural ruins, blasted down by Augustine's bookish power ... at least that's what I assume. You have easier access to the whole thing than I do, Karl, if you want to check out the mis en page (I assume the image is cropped): the ms is held by the Morgan.

And a mighty fine image it is too. 'By the power of the two iPods I hold in my hand, I banish thee, demon!' Mind you, don't you think it looks as though the Bart-Simpson-esque demon is nimbler than the saint's smiting? I get the impression he'll leap merrily from pillar to pillar, just ahead of the threshing flail.

In other news: Stephen Greenblatt was in Monty Python? You sure about that?

Would I spread nonverifiable information? Check this out, Adam.

The relevant quote -- with an added cameo by T S Eliot -- for those too indolent to follow my link:

Also while at Yale (Ph.D. 1969), Greenblatt "rushed out of a corner drugstore and knocked down an elderly man who turned out to be T.S. Eliot. He survived." And, while studying for a B.A. (1966) and M.A. (1969) at Pembroke College, Cambridge, he performed with a group of students who went on to become the Monty Python's Flying Circus troupe. "My name occasionally turns up in the early shows," he said, "usually in grotesque situations and invariably drawing a somewhat mysterious laugh from the studio audience."

I had no idea about the Python thing but I've just looked at the scripts and it's true. See here: he's mentioned in episode 27 at the start of series 3, so not really one of the early shows. I've also checked the official Just the Words books which I've had since the 80s (just in case it was an elaborate web based hoax) and they agree with that site.

I think someone needs to investigate the complex and very important cultural matrix of Monty Python and Medieval and Early Modern Studies.