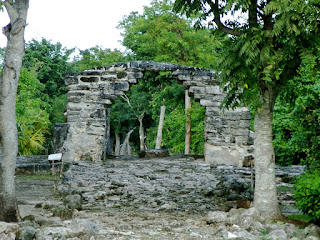 Just back from a trip around the western Caribbean -- not scholarly, of course, but it was impossible to resist the lure of Mayan ruins on Cozumel. We toured a site called San Gervasio, named not -- as you might expect from that "San" -- after a saint, but instead in lasting memory of the man who ruined the ruins.

In the days before the conquistadors, Cozumel had been a thriving pilgrimage site, especially for young women. Smallpox and other diseases so decimated its population that the island was essentially abandoned until the nineteenth century brought a new wave of settlers from the mainland. "San Gervasio" is an area in the island's interior that was christened by its new owner with his own name: he thought so highly of himself that he added that saintly descriptor, and used the land as a ranch. The Mayan temple complex he blew to pieces with dynamite, seeking a wealth these architectures did not hide. Now a national park, the area is protected by the Mexican government as a heritage site. Gervasio's descendants are fighting to regain the land.

Archaeologists are carefully reconstructing the Mayan complex, so upon tumbled mounds stone pillars and walls are rising again. To walk through this landscape of shattered steps and fragmented structures is to feel not the melancholy of some lost past, but the life of these stones in the present. Unlike Stonehenge, with its circumscriptive walkway system that separates its megaliths from the time into which they intrude but a time which they do not seem to inhabit, at San Gervasio few barriers prevent you from treading where you wish, from exploring whatever odd nooks strike your fancy. The small teams of excavators and construction laborers may give you a bored glance if you intrude upon some space where they are working, but otherwise you are as much a part of the scenery for them as the iguanas and palms. Most striking in these ruins are the remains of walls with bright red handprints upon them, the lasting trace of lives which touched them centuries ago and left no other story.

My son Alexander even found something among the smashed rocks: a circular piece of ancient white that is either the remnant of a broken dish or a fragment of a skull. This is the same kid who discovered a Neolithic flint axe in Hyde Park. In this case, however, he has made himself so nervous about the possibility of a curse inhering in the bone that he won't talk about his find at all.