Two pieces on spirituality and art from the NYT 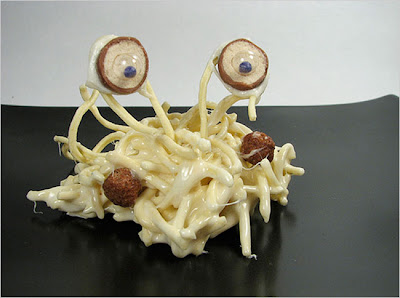 Whether devoured by the eyes or mouth, whether its potential embarrassments are to be excused by ethnicity (Neo-HooDoo?) or culinary achievement (the Sierpinski carpet in marzipan?), spirituality continues to move art. Just like, you know, in the Middle Ages.

Though I'm not sure the FSM was a devotional cookie back then.

EDIT 8 AM: Behind this short post, placed at ITM as I browsed the morning news, is a question that has been haunting me for a few weeks. While visiting another university recently, a graduate student asked me (quite sweetly) what kind of Middle Ages I teach. A whole list of possibilities ran through my mind, but I kept thinking about the crucifix that was hanging in the room, so I answered: compared to the way that medieval literature has been taught frequently in the past, and in many quarters continues to be taught, it's a fairly secular medieval studies.

I'm not fully satisfied with that answer, even if it is essentially true. Trained as I was in the late 80s into the 90s, I learned to be skeptical of Robertsonian, Christian allegorical readings: the Patrologia Latina as the key to all mythologies. Easy enough to reject, I suppose, because to be honest the materials never really resonated for me personally. I am far more interested in how worldly genres like romance resist or create human history (and not how these genres might be theologically motivated and circumscribed ... philosophically propelled, maybe, but not so much theologically). When I have worked with hagiography, it's mostly been the stranger and more exorbitant materials: Guthlac, for example, or Margery Kempe. In my own work I'm far more at ease speaking of aesthetics rather than spirituality, even while suspecting that the former is a secular substitute for the latter (see here, where an inhuman beauty propels art out of mundane history ... and thanks to Karl and Dan for their comments on that post, comments that I've been ruminating over for a few days, and are behind what I am typing now).

I have sometimes thought that spirituality is a club to which I never received my membership card. I have a slight envy of those who do possess the card -- not because I yearn for something that would fill some inner emptiness (there is no void that I am aware of), but because it sometimes strikes me that in the absence of such a yearning the Middle Ages that I am capable of knowing is somehow impoverished. Yes, I know, probably not: nothing gets in the way of interpretation like belief. But still, I do wonder how much of my own interpretive stance comes about from the thing that I silently define my Middle Ages by excluding, because I do not possess the desire to make it my own.
Posted by Jeffrey Cohen at 6:05 AM

I seem to have the opposite problem in teaching. Though I am personally more likely to put a FSM on my car than a Jesus fish, my students often come away from my classes with the impression that I am deeply religious, especially if they are religious themselves. Catholics in particular often linger after class to tell me how moved they were by my explanation of some medieval theological point or another.

Partly, I suppose my undergraduate degree in philosophy is to blame. After studying Augustine and Plotinus under a relentlessly analytic Plato scholar, I tend to present medieval theology as a thoroughly reasonable affair--these are smart people making smart arguments and doggedly refusing to fall back, as a modern Christian might, and say "It's simply faith, you can't understand it if you don't have it."

But, weirdly enough, I even find it at my blog. I would think all the scatological humor would put them off, but a lot of my incoming traffic can be traced back to links from the Christian blogging community.

And yet I thought your address at SEMA circled obsessively around the question of resurrection?

Jeffrey, I am not sure if I have much of a response to make here other than an affirming echo, and some personal experience.

My first exposure to medieval lit in undergrad was a firmly, explicitly Robertsonian Middle Ages. And I have to admit, it did little for me. Raised nominally Jewish but becoming more secular as time goes on, I experienced that same dilemma you describe: the slight envy of not belonging to that club, while at the same time knowing I will not belong to it.

Because I did not feel any passion for medieval lit in undergrad (despite writing a decidedly Robertsonian Honors Thesis on Chaucer), I had no intention of becoming a medievalist when I came to graduate school. But when I encountered a different kind of Middle Ages (different, strange, familiar, fascinating all at once), I was hooked.

I constantly have conversations with colleagues (or other professors) who think I am being too anachronistic in my work, or am somehow doing a kind of violence to the idea of the Middle Ages. But if anything, I feel that the Middle Ages I also define mine against is too limited, and somehow less medieval. To me, the Middle Ages was too varied and too contradictory to be understood by any single hermeneutic program. Maybe that is why I keep coming back to ambivalence in my work.

I do wonder, though, about when I enter the job market in full force next year: will my idea of the Middle Ages clash with the idea of it held by the departments I am applying to? By the looks of it, sometimes yes, sometimes no.

Carl, one thing that I have going for me is a strongly non-Christian last name: meaning that no matter how passionately I argue that theology is reasonable, that there is something even beautiful about how Augustine obsesses over fossils or Boethius worries over predestination, my students will mainly assume that I am an outsider to such works and cannot actually believe what I speak about. So the Middle Ages I teach will (when it is the Christian Middle Ages) tend to seem like or be received as the Middle Ages from the outside. I find it very interesting that your blog gets so many Christian links; I wouldn't have linked it with either belief or unbelief (to quote a John Arnold title).

Anonymous: I would say that my SEMA paper, preoccupied as it was with empty tombs as well as tombs filled with things that weren't supposed to be alive inside them, was circling the possibility of resurrection gone awry -- which I grant is the same as circling "obsessively around the question of resurrection" I grant, only I didn't want to turn the paper into an Iain Higgins like reading in which the vast and heterogeneous multiplicity of Mandeville is still subsumable into a fairly reverent fiction about the goodness and the necessity of Christianity and crusading ... I wanted to ask what an impious Mandeville would be like, one who really did multiply possibility rather than circumscribed it. That's why my point of departure wasn't theological exegesis of the resurrection story, but a quote from the poet Wallace Stevens.

Rick, thanks for posting. I don't want to make any blanket statements about the job market, because they always turn out to be wrong ... but I do think it's important to keep in mind that most hiring of medievalists is done by nonmedievalists. The kind of Middle Ages you so eloquently articulate -- "a different kind of Middle Ages (different, strange, familiar, fascinating all at once)" -- is likely to hold more appeal than a more reverent one might. I agree with you on this: no one patrols the borders of the discipline so well as we medievalists against each other, especially via the charge of anachronism. It's a charge that carries so much power because historicism (rather than Robertsonianism) is our field's dominant mode of interpretation.

What Carl said (minus the trained in philosophy part).

Trained as I was by an anti-Robertsonian, gay atheist who nevertheless wrote frequently on devotional texts and continues to work on religious imagery and ideas, I think I had the perfect model of how an outsider can be the most sympathetic but incisive of interpreters. And so I've written about some of the same texts in rather secular ways and as an outsider (or a quasi one -- I was raised Catholic, after all).

But I do have an almost knee-jerk response against the monolithic Robertsonian style, that, unfortunately, is still being taught out there (though, I suspect, mostly by non-medievalists who are the sole pre-1800 faculty members in small departments). I had an MA student protest recently that Beowulf must have an allegorical meaning because monks were the only ones reading it. That's what she was taught, anyway. I nearly said, "Well I'm sorry you had such a dinosaur for a teacher." But instead I said something like, "Well, first of all, we don't know that. Second of all, what makes you think all monks thought alike?" And then I brought up "What has Ingeld to do with Christ?"

The thing that has always bothered me about the exegetical critics is the way they see the M.A. as monolithic. Even within Christianity itself that's problematic. And offensive. It's so infantilizing and over-simplifying of hundreds of years of writers and their audiences. And it's a boring way to teach.

But for some reason it appeals to students, even the non-Xtn ones. They stumble upon some Robertsonian style reading somewhere and they latch onto it. And I get papers about SGGK and sin or Beowulf as Christ figure. Ugh. I think these are the same students who think literary interpretation on some level is finding "the" answer or key to a text's meaning.

Or maybe it's my fault because I talk at the beginning of class how there will be religious texts in my class, but that medieval Xtnty isn't modern Xtnty, so we're all outsiders in a way. So maybe they get confused about which ones are the religious texts.