Did Guthlac of Mercia bury the Staffordshire Hoard? 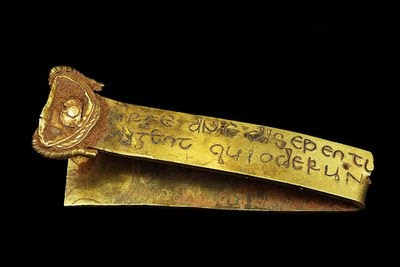 I've already admitted that the amulet with the Biblical inscription is my favorite item from the Staffordshire Hoard, mostly because I love its combination of text, craftsmanship, beauty ... and implicit belief in the power of words to alter the world. The Latin phrase inscribed across its gold reads: "surge d[omi]ne [et] disepentur inimici tui et fugent qui oderunt te a facie tua" ("rise up, oh Lord, and may thy enemies be scattered and those who hate thee be driven from thy face") -- perfect for wearing into battle. Brandon Hawk rather brilliantly points out that the only Anglo-Saxon place we easily find this verse from Psalms and Numbers is Felix's Vita S. Guthlaci -- the Life of Saint Guthlac, a biography of a Mercian warrior who later in life became a reclusive monk plagued by demonic attacks.

The vita Felix composed surely counts as eighth century Mercian literature, so it is a text from the hoard's provenance. Guthlac himself was descended from Mercia's royal blood, and seems to have been trained to lead men into battle. He is said to have taken his name from his tribe, the Guthlacingas. For nine years in his youth he was a successful warrior. As his fame spread across the land he gathered a host of armed men "from various races and from all directions" to serve beneath him. At the age of twenty-four, though, he abandoned this life as an illustrious warrior and became a monk at Repton.

Here's what I once wrote about the vita in Medieval Identity Machines, trying to tie the text to the martial exploits of the Anglo-Saxon kingdom it describes:


That Felix was writing a saint's life for Mercia first and for the rest of Britain thereafter is made clear as Guthlac's fame spreads initially through his own country and then throughout the island, the expanding trajectory of [King] Æthelbald [of Mercia]'s own regnal power (non solum de proximis Merciorum finisbus, verum etiam de remotis Britanniae partibus, XLV). Guthlac is said to lead a warband "scraped together [Felix's odd term conrasis, probably from radere, "to shave"] from many peoples from all directions [undique diversarum gentium sociis]." The description also likely reflects the political ambitions of the Mercian ruler, and would have been just as true of his successor Offa, who seized the throne from Æthelbald's heir in 757. Both kings eventually realized their desire to rule as overlord of the "scraped together" southumbrian Anglo-Saxon kingdoms, an alliance diversarum gentium ... Guthlac's biographical details construct in Felix's account a pan-insular Mercian superiority that had an ideological utility to its promulgation for quite some time, not least because Offa would soon be so eager to transform Mercia into the singular body of "England": "All this is summed up by Offa's decision from 774 onwards to call himself Rex Anglorum, king of the English ... He preferred to make southern and eastern England part of Mercia and to rename Mercia England whether their inhabitants liked it or not" (Eric John, Reassessing Anglo-Saxon England 54).


And here, from Felix's vita itself, is the description of Guthlac's Beowulf-like life at the forefront a warband:


So when about nine years had passed away during which he had achieved the glorious overthrow of his persecutors, foes, and adversaries by frequent blows and devastations, at last their strength was exhausted after all the pillage, slaughter, and rapine which their arms had wrought, and being worn out, they kept peace. And so the man of blessed memory, Guthlac, was being storm-tossed amid the uncertain events of passing years, amid the gloomy clouds of life's darkness, and amid the whirling waves of the world. (XVIII)


When he "by frequent blows and devastations" overcame so many enemies, what did he do with the wealth he took from them? Did he strip their weapons of their ornament? What did Guthlac do with all the treasure he pillaged? Did he bury it as the Staffordshire Hoard?

Well, maybe. Guthlac died in 714/5. Many estimates I've seen of the hoard's date of origin give a spread from mid seventh to mid eighth century, with a tendency towards the early side of that number. So, it is possible that the hoard is Guthlac's (if not in the least bit probable).

But, more importantly, doesn't Felix's Life of Saint Guthlac, in its imagining what the life of a contemporary warrior might have been, provide us a small vision of the kind of person who might once have worn into battle a gold amulet elegantly inscribed with "surge d[omi]ne [et] disepentur inimici tui et fugent qui oderunt te a facie tua" -- and then who, having exhausted himself through his own success, might have settled into the solitude of a fen-locked island to contemplate what such passages from the bible mean?

great post, Jeffrey. lovely to show how we can use material culture and texts together to better understand each.

Thank you, Matt and Jonathan!