The Glow of Beauty, the Muck of History? 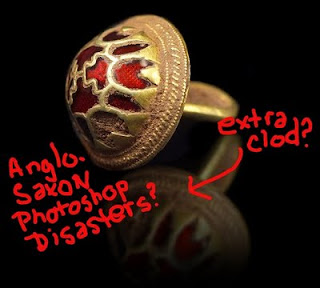 
"One more thing, now that I've finally gone through the bajillion images in the Flickr stream: isn't it interesting how that "rich glowing effect" that Karl mentioned is achieved technologically? I'm speaking of course of the viral dissemination of the hoard images and videos (which has been great; I can't get enough), but also the ways in which the images have been made to glow via aesthetically pleasing lighting, dramatic use of shadow, artistic balance of light and dark for just the right color saturation. I love that the image Karl used for his post is labeled "NLM 675 - gold and garnet scabbard boss fitting. Press photo with reflection added. Birmingham Museum and Art Gallery." Press photo with reflection added? Nothing like a little Photoshopping to bring out the beauty of the hoard... I'm not saying that to condemn, actually: I am just pointing out the collaboration that is unfolding here between ancient artifact and contemporary technology, between the A-S artist who manipulated the garnet and gold to make them shimmer, and the computer specialist who has done likewise, playing with the image to create maximum awe and covetousness."

Karl provided an annotated illustration, with a serious undercurrent: something doesn't seem quite right about the visual enhancement of the publicity image.

I'm still wondering about why several of the hoard pictures were modified (given that they are digital images, they were probably all modified, but the addition of a fake reflection seems of a different order than the balancing of contrast and or tweaking of color saturation). On the one hand, I honestly do like the collaborative nature of the image in question: Anglo-Saxon and contemporary artists ally themselves across the centuries in a shared endeavor. The beauty has its pull, as the crowds in Birmingham have made clear. Or was it history's gravity that drew the visitors to the museum, that draws us to the internet to view the hoard? Does history have its own beauty, or is the muck of history what gets cleaned away from the hoard in order to transform an earthbound concretion into discrete aesthetic objects, into lovely images?
Posted by Jeffrey Cohen at 8:14 AM

I'm not sure if you and Karl are suggesting that the object in the photo has been digitally touched up to remove the mud, but if you are, it seems much more likely to me that the reflection is simply displaced from the object in either time or space; that is, I bet that either a reflection from a similar object has been used (there are lots of the gorgeous little studs in the hoard, it seems) or else that the reflection is from an earlier shot, after which the item was cleaned and only thereafter posed for this picture. The stuff is going on display, after all, they will have cleaned it somewhere in the process.

But there will be record images, for security and documentation, and then there will be press images, and the two won't look the same. You wouldn't, for example, want a reflection in a record image—we work quite hard to eliminate them with lighting in my department—so the press photo would probably have to have it added not to look odd. I would guess that was why they were modified. I don't think there's a problem there, is there? There are plenty of images of objects in the Flickr set au naturel. Karl didn't use one of those. So, whose spin are we critiquing? :-)

In fact, investigation shows that the Flickr set evidences an understandable process. First you have a record photo against a black background, so that there is no reflection and minimal glare. It's also easy to colour-replace with a white background; slight rotation here too I think, to bring the parts that caught the light to the centre. But with no reflection it looks unrealistic, so for press purposes a blurred and desaturated paste of the same image upside-down will do the job. Voila, the art put back into artefact. My point is mainly that the piece won't have been photographed with a reflection in the first place. What they're probably doing is avoiding photographing things twice for different purposes. When you're dealing with a thousand-plus items you start thinking in terms of man-hours, trust me.

I'm pretty sure that the larger clump in the reflection is just an artifact of the reflection-making filter they used. The filter flips, blurs, and makes the image transparent. I think the blur resulted in a smearing to the left and right that made the mud bump seem bigger in the reflection.

(incidentally, a lot of other folk have said that they don't see the disparity between the image and "reflection": I presume then that you do?)

10thM: thanks very much for your generous technical intervention, which, in addition to its fundamental interest, also adds weight to your hypothesis about how we ended up with this stud reflection perhaps "displaced from the object in either time or space." That point, exactly, is what's grabbing me about the image, as are your points about putting "the art...back into artefact." I also love that a reflection that's (perhaps!) off in some way has been added to make the object look more "realistic."

I'm definitely not aiming to accuse anyone of bad faith or falsifying evidence, nor am I claiming this image is typical of the released photos as a whole. It's only that I find this image and peculiar reflection at once exemplary of the coincidence and coaffectiveness of 21st- and 8th-century desire for treasure and of way the "co" nonetheleess doesn't quite fit. Because I was teaching Lacan to my theory class last Thursday, I'm also fascinated by the imperfection of the fit between reflection and object.

But I'm honestly not sure yet where to take the ideas, or where to suggest Jeffrey take his! In other words, there's as yet nothing so grand as a claim being made.

@GM: sorry for leaving you out of my response to 10th: you and I were writing our comments at the some time; so, thanks also for your technical intervention. Your explanation also strikes me as likely.

So much delight exists on the internet in staging "Gotcha!" moments where poor Photoshopping is revealed.

Does the scabbard boss become more realistic when a fake reflection is placed underneath it, and if so why? Will future generations of viewers potentially find this reflection to be an obstacle to viewing the image realistically, judging the mirror image an artifice that robs the object of its immediacy, its force? Will they say "Oh that is so 2009, with its black backdrop and moody lighting and jewelery store advertisement vibe!"

Or does altering the image by adding the reflection bring about a better communion with the beauty that was already there?

Of course, that last question can be applied to the cleaning process, any quiet restoration done as part of that process, the museum exhibition, and so on. What I'm wondering -- in a nonjudgmental, filled with curiosity way -- is how the hoard is mediated by technology in its presentation, and where the place of history is in that mediation. Do we lose something of history when the the boss looks like it came from a Tiffany catalogue? Does a more historically aware approach caution us against this commercial photography derived visual language? Or is such photography and the Anglo-Saxon manufacture of stunning garnet and gold scabbard bosses part of one and the same transhistorical impulse, the human desire to fashion aesthetically pleasing (rather than simply useful) objects?

Yesterday I went (for the first time in a long time) to Lastingham and stood in the crypt http://www.lastinghamchurch.org.uk/church_guides/guide_sml.htm

There is something about being in a place, isn't there, a real touch and smell of a place, that even good photos do not recapture (one reason I almost never carry a camera - and am glad of it). I guess that experience is perhaps what a 'photoshopper' is trying to recreate.

Although now that I think of it, my annotation "Anglo-Saxon Photoshop Disasters" isn't exactly helping my claim.

Let me therefore plead guilty of being too clever by half.