Hello, Beautiful: The Inaugural Issue of Glossator Has Arrived! 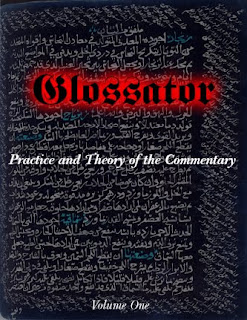 Con-sider our commentary a love-driven constellation, a double star (binary or optical?) gravitationally caught within these motions, like the subtle turnings of an ungraspable celestial tress.
--Anna Klosowska and Nicola Masciandaro, "Beyond the Sphere"

Speaking of oceanic and new critical modes, and especially in relation to one of our anonymous commenter's questions to me in the thread to Jeffrey's post on "New Critical Modes, Part II" after I had argued for the widest possible venues for the greatest variety of scholarly modes [and which question I actually think is critically important and worth returning to with renewed earnestness and care], and also returning, as I often do, to the cautions of Jonathan Jarrett that, while I [or we] may want a super-abundance of scholarly modes, styles, etc., there are, in the end, financial constraints and only so many jobs [many conventionally defined] and so on, and here then is the question:

eileen, can you, do you really believe in a world of such infinity, such unlimitedness? it seems to me a world of fantasy, and not necessarily a desirable one. as one of the readers that irina so eloquently describes as needing "generosity" for reasons that i believe are good but that i will keep to myself, this desire for ever-overflowing, ever-proliferating new discourses seems overwhelming.

Oh yes, it is overwhelming, even for me [I don't sleep much--ask my friends], but I can only say again that I do believe in this world, yes, but with the caveat that those of us who desire to enlarge the fields within which we work and play, and to create new modes and styles of scholarship, new ways of doing things and of being together [affectively] in this new work we do [and for me, especially, if we care enough to help create financially sustainable spaces within which more of us can have gainful employment doing the work we simply can't stop ourselves from doing and therefore hopefully avoid the despair of being shut out of a profession that simply doesn't have room, supposedly, for "everything"], then some of us are going to have to commit ourselves to doing more than just our individual scholarship and teaching and also think of "service" to our profession as something that extends beyond our institutions to embrace the future of the field itself. We will create and have created working groups [Babel Working Group], institutes dedicated to cutting-edge cross-cultural and cross-disciplinary scholarly exchange and learning [GW-MEMSI], journals that bring the Middle Ages and modernity into productive contact [postmedieval], journals that combine literary and theoretical writing [Whiskey and Fox], and special journal issues and essay collections that highlight the kind of "new" work we want to do [Fragments Toward a History of Vanishing Humanism], and we must also work within our institutions for innovative curricular reforms that both protect what might be called traditional premodern studies while also expanding the role of what medieval studies can do within a more richly-imagined cross-temporal curriculum, at both the undergraduate and graduate level [I and my colleagues have done this within the English department at S.I.U.E. where we set in motion this semester a brand-new B.A. in English program that actually strengthens the position of medieval and early modern studies while also insisting that periodicity, as well as certain canonical "giants" such as Chaucer, Milton, and Shakespeare, no longer serve as the primary edifices within which certain texts are taught and required].

Let's celebrate, then, too, some of this dedication and vision [and unpaid labor] that has gone into creating new spaces for work in our field that aims to be creative, nomadic, multi-voiced, unconventional, affective, pluralistic, lyric-experimental, and felicitous in its movements across periods, geographies, and genres. Let's celebrate, especially, today, the unveiling of the inaugural issue of the open-access, online journal Glossator: Practice and Theory of the Commentary, the brain- and love-child of Nicola Masciandaro, Karl Steel, and Ryan Dobran:

The editors of Glossator describe the mission of the journal this way:

Glossator publishes original commentaries, editions and translations of commentaries, and essays and articles relating to the theory and history of commentary, glossing, and marginalia (catena, commentum, gemara, glossa, hypomnema, midrash, peser, pingdian, scholia, tafsir, talkhis, tika, vritti, zend, zhangju, et al). The journal aims to encourage the practice of commentary as a creative form of intellectual work and to provide a forum for dialogue and reflection on the past, present, and future of this ancient genre of writing. By aligning itself, not with any particular discipline, but with a particular mode of production, Glossator gives expression to the fact that praxis founds theory.

The first issue is exciting and includes work by some of our favorite people--some medievalists, some not, and some poets, too [and just look at the range of subjects!]:
Directly related to our conversations here about new critical modes, Dan Remein describes his essay this way:

This work consists of new poems and commentary in the tradition of Dante’s prosimetric self-commentary. It aims to explore the shared ground of poetry and commentary, and the potential symbiotic and generative relationships between the two modes. The work proposes the elaboration of at least three particular formal poetic structures—which it names the ‘riddle,’ the ‘missive,’ and the ‘miniature romance’—, cites moments from a broad range of medieval, modern, and contemporary literary history, and attempts to provoke a poetics of both poem and commentary that might help generate a more politically salient concept of literary community.

And here is the abstract for Anna Klosowska and Nicola's essay:

Revolutions: The turning movement through the images of this sonetto involves several eddying, (micro)cosmic motions. We begin already beyond the widest sphere, then penetrate it from this side via love’s weeping in a motion that is virtually re-initiated from the heart in a kind of syntactic time-warp. Then comes the thought-sigh’s arrival before the lady and its getting lost in the epicycles of honor and splendor and gazing. Then his subtle retelling of the gaze caused by a secondary motion of the heart that first moved it. Then the mystical understanding of the pensero’s unintelligible speech through the apophatic anamnesis of the beloved’s name. Finally, a gracious love-boast gently expanding towards those who have understanding of love. Con-sider our commentary a love-driven constellation, a double star (binary or optical?) gravitationally caught within these motions, like the subtle turnings of an ungraspable celestial tress.

Well? What are you waiting for? Start reading! And for god's sake, enjoy yourself.

Was this written specifically to get me excited? I'm very, very curious how these Roussel and "Chronic Meanings" will be intertwined.

Excitement! That's what we need more of in our field, yes! Score for Glossator!