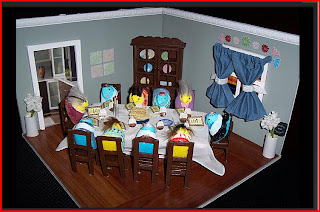 Not an uncommon story: I was raised Christian, and woke up one day in my teens to discover myself an atheist. Since then, I've been indifferent to Easter, happy or otherwise.
In my Brooklyn neighborhood, largely Muslim and Jewish, I feel as though I ought to hear 'Happy Easter!' with something more than indifference. Dutifully, I turned to my google desktop search (search keys: Easter + Jews) and turned up my notes on Solomon Grayzel's Church and the Jews in the XIIIth Century. Here I found material on the 1284 Synodus Nemausensis (Synod of Nîmes), which the Wikipedia, using the century-old 11th ed. of the Encyclopedia Britannica, declares to be "of little historical importance", and which the Jewish Virtual Library characterizes as decreeing "severe measures against the Jews." Such significant priorities!

Only bishops may ordain penances for forbidden acts of sexual intercourse, including that with nuns, virgins, Jewesses, Muslim women, or brute animals. Furthermore, Jews must wear a rose on their breasts. They may not appear in public during the Easter season, nor are they to consume meat in public during Lent. Christians must refrain from eating unleavened bread at Passover, living in Jewish homes, frequenting public baths in Jewish company, or receiving medicines from Jewish physicians” (254-55).

A depressing record of antisemitism, certainly, but with (at least) two possibilities of something more hopeful:

Imagining such meals, I am more than happy to acknowledge an offered 'Happy Easter,' or, for that matter, a 'Happy Passover.' Do enjoy your holidays, whatever, wherever, and whenever they are.

(photo from here, itself reprinted from the 3rd of the Washington Post's ongoing peeps contest)
Posted by Karl Steel at 11:08 AM

Nice post. I am going to guess that the regulation was more than symbolic -- that there were some Christians and Jews who were neighboring, in a heterotopic way, and therefore sometimes sharing tables and feasts. Why should Nîmes be any different from any other space where convivencia unfolded? (And I mean convivencia in the complicated way it has been redefined by recent scholars of medieval Judaism: coexistence, cultural interpenetrations, rivalry, friction, jealousies, violence, and mutual creative influences via affection and infection).

I was going to ask if Jews and Christians who dined together also ate Peeps, then I remembered that they are made with nonkosher gelatin so the answer was no. Too bad.

Karl, interesting but you might want to check older councils. Conciliar decrees have the unhappy tendency to simply repeat earlier versions (where they think them appropriate). Maybe back to Toledo and the Visigoths?

Matthew, good point, and thanks for that. Luckily, I already had extensive notes on the Visigothic codes, at least so far as I understand them, on hand. The closest thing we have to what's going on at Nîmes, at least so far as legislation directed at Christians not to fraternize with Jews, is here. But we're still a ways odd.

It will take me a bit to look through the councils of Toledo: hadn't realized there we so many! I just have a few scattered notes on the 12th, from Samuel Krauss's The Jewish-Christian Controversy from the Earliest Times to 1789, but clearly there's a lot more out there.

A good resource here is Shlomo Simonsohn, The Apostolic See and the Jews: Documents, 492-1404, where I have, from my notes:
As early as the beginning of the 4th century, at the Council at Elvira in Spain, Christians were forbidden from eating with Jews (133). Repeated several times. “Christians were also forbidden to live with Jews, to consume kosher food and drink, to take part in Jewish festivities, and to otherwise associate socially with Jews” (134). The Pope didn’t weigh in on this until the eighth century. Cites this, “Innocent III exhorted Peter II de Courtenay, count of Nevers, to prevent the Jews from selling to Christians meat that they themselves would not eat, and from leaving to Christians the leftovers of the wine they tread” (134)

First Holy Week curfew passed against Jews was at the 3rd council of Orleans in 538. While it may have been first instituted to protect Jews from Christian violence, its main focus was “removing the infidel Jew from the sight of the faithful at a time when the Christian calendar focused on the antagonism between the two religions” (131). First Papal mention of curfew was by Alexander III, between 1159-1181, in response to a question from the Bishop of Marseilles.

From F. M. Powicke and C. R. Cheney, eds. Councils and Synods with Other Documents Relating to the English Church, vol. 2, parts I and II. Oxford, 1964, I have a number of other similar laws, though none specifically yet that speak to passover, at least so far as nonservile Christians go.

Here's a short answer! You're almost certainly right. My notes primarily concentrate on meat markets (from back when I was writing a dissertation on meat), but now I'm curious about shared passover meals. I imagine Toledo councils will be the way to go...

And Jeffrey, likewise it's a matter for me to track down passover references in the convivencia scholarship. A fun task for some future date.

By the way, if we ever tired of this medievalist thing, I bet we could make a killing marketing kosher peeps. We could call our business Convivencia Confectioners.