Who can be a witness? 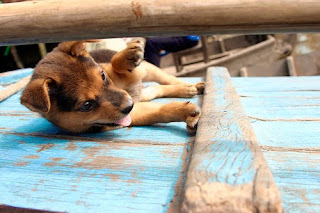 From Bracton (13th century), from a section on "What wreck is; and concerning great fish, that is, sturgeon and whale," concerning who can claim shipwrecks or great sea animals that wash up on shore:

If a ship is broken and no living soul escapes from it [de qua nullus vivus evaserit] [,] that may properly be called wreck, especially if the owner has drowned, because the true owner, coming from afar, may prove by certain proofs and signs that the things are his, as where a dog is found alive and it can be established that he is its master; it will be presumed that he is also the owner of the things, and so [also] if certain marks have been placed on the wares and goods.

Further words on wrecks and life from the Statute of Westminster, 1275, c.4, quoted from English Historical Documents III, 398-99:

On wreck of the sea it is agreed that when a man, a dog or a cat escapes alive from a ship, neither the ship nor the boat nor anything that was in them shall be adjudged wreck, but the things shall be saved and kept, by view of the sheriff, the coroner or the king's bailiffs, in the hands of the people of the vill where the goods are found, so that if anyone sues for these goods within a year and a day and can prove that they are his or his lord's, or were lost when in his keeping, they shall be restored to him without delay; and if not, they shall remain the property of the king and be appraised by the sheriff and the coroner and given to the township to answer before the justices for wreck belonging to the king.

Classical commentators on English law judge the dog and the cat of the Westminster Statute as only examples, but there's more, much more to be said about forms of witness and recognition: life, not of whatever sort but particularly domestic, attesting to the integrity of a ship; life that we would think of as mere zoe now political life, entering into the law as witness simply by virtue of its own integrity as life; a dog, in the Bracton, as a good witness to claims of human identity (a legal version of a story as old as The Odyssey or as common as The Dog of Antioch).

When can nonhuman life count as significant life? When is its life equivalent to that of a human? When can it give witness? Here I think I have the grounds for a future study.

Karl, you may be interested in an account summarized in James Masschaele's recent (and, I think, very good) book Jury, State, and Society in Medieval England (New York: Palgrave, 2008). Masschaele relates the following: "An inquest jury in Kent rejected a man's claim of spiteful accusation, explaining that he was reasonably accused because his dog, who followed him everywhere, had been seen near the corpse, but went on to note that the canine was a false clue because someone else had committed the crime" (p. 24). This single condensed sentence is meant to be only a brief example of a general idea, but it may point to more room for exploration in the source. His footnote indicates that the account appears in an archival source in the National Archives.

I don't recall anything else about animals in Masschaele's book, but your thoughts & questions sparked my memory of this odd/humorous account of animal intervention in human law. Then again, I didn't have any particular reason to be looking for animals when I read the book--I wonder what else might be found.

Great! Thanks, Brandon, very much. This is exactly the kind of thing I'm hoping to compile.

As I'm sure you're aware, Cass Sunstein, probably the most-cited legal scholar of recent times (and a longshot for Supreme Court Justice), has advocated animal standing in legal disputes:

Thanks much. Sections III.A-B are particularly interesting, and the whole article is very very useful as a review.

I would like, I think, to differentiate the kind of witness I'm interested in writing about from the witness of an animal's body in an abuse case (one of the key examples about which Sunstein writes). There's a kind of muteness and passivity in the latter case, where the animal witnesses by having been acted upon, whereas in the above examples from Bracton and the Westminster Statutes, I feel as though animal life itself, as such, is the witness.

This is quite boggy as stands, but maybe I'll be able to figure it out in a bit.

Man. I have enough trouble working out what allows a person to be a witness in my stuff without going for animals :-) That said, there is one thing that springs to my mind which I'm sure you've already thought of but is all that occurs: animals are, in all these cases at least, owned. Where that applies to people, i. e. slaves, they're not allowed to witness, because it is assumed that they'd be under the influence or duress of their owners. So what you are touching here is an understanding of how far a dog (or indeed cat, which some would say is a different question) is rational enough to understand threat or pressure or alternatively to act in an understandable way in response to circumstances. The rationality or predictability of the animal—and I suppose those are opposite ends of a scale, mostly—could be read in either direction, as disqualifying it or qualifying its evidence either for being brute or loyal. The human animal is not considered the same way, but why? because it's rational enough to be threatened? But a dog can be trained... I suppose these are the sort of questions you'd hope to answer after the project, not before...

I remember thinking about the status of nonhuman testimony, when, during the OJ murder trial, the bloody-pawed Akita emerged as the only living witness to the crimes. The Akita (also named Kato?) emitted what a (human) witness described as a "plaintive wail" that brought the first humans to the scene.

Never had a clue that the question of nonhuman witness had been examined in the way you document. Thanks!

Matt, thank YOU, for the OJ bit. I'd forgotten it, and it would make a wonderful epigraph to whatever I end up writing.

JJ/10th: thanks also. I was waiting for either you, or Matthew Gabriel, or Larry Swain to come swooping in and hoist me on my legal ignorance. Feeling more secure now, and AFTER, definitely. I think the issue of the slave.animal comparison is definitely one to consider in this context, as is the question of rationality. IN a way, the purported lack of rationality and thus lack of free choice would make the animal a, I imagine, BETTER witness than any given human, since an animal can't choose to deceive (hence, again, the Dog of Antioch story, where the dog's irrepressible loyalty to its dead master and to identify the murderer are both what makes it a superior 'policeman' AND less rational than humans).

Yes, the ability to choose would be key, I agree. Where do the Middle Ages stand on birds like jackdaws or even parrots that can be taught to imitate the human voice? Do they ever get accused of lying? (How on earth you would search for such anecdotes, I have no idea...)

I certainly don't have enough ignorance to hoist anyone on law, and what I do know is mostly too early to affect your study, but if you want a quick check of one of the more erudite (and therefore possibly atypical) 'barbarian' codes, it's often worth knowing that the Visigothic Law is online in translation, with a reasonably handy table of contents too. (Of course, the whole corpus is online in Latin via the dMGH and I've been told off for citing Scott's translation, but if you just want an inkling-checker, it's there.)

Thanks for the warning in re: Scott's translation. I have read it (at least its material on Jews), not yet cited it anywhere, and will be cautious in the future. Another very old law code available through the MGH: the Edicts of Rothari, King of the Langobards.

I'm wondering what mileage I can get out of this issue from Derrida's discussion of biopolitics in Beast and the Sovereign? (Discussed here. Again, it's a matter of seeing where things take me... this all being a project for 2011, at any rate.

Well, as I say, all the codes are online in the dMGH. The problem with the Scott translation, aside from its old and rather Victorian treatment of race, is that there was an early edition which was substantially abridged, and though the online version is the full one, his name is mistrusted all the same.

JJ/10th: thanks VERY much for the further info.