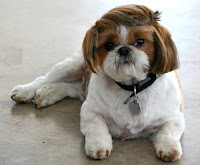 I've been reading Ralph “Bocking's” Life of the thirteenth-century English Bishop Richard of Chichester, edited and translated by David Jones here, seeking some context for an often-misconstrued bit where Richard mourns the deaths of innocent animals as he sees them taken past him to be slaughtered. So far, what I've encountered is typical for any saint's life: he's generous to the poor, humble in his dress, intolerant of witchcraft, of dancing and selling in churchyards, and of Jews building new synagogues. Ho-hum.

But, below, as the title promises, a Sabbath treat: corpse-carrying and a medieval combover. For today's peculiar medieval tidbits, you're welcome.

He also compelled some citizens of Lewes, who had violently forced a thief out of a church where he had taken refuge and hanged him, to dig up the thief, or rather his decaying corpse for he was now dead and buried, and carry him to church on their shoulders (189)

When a man of noble lineage, who was a rector of a church in the diocese of Norwich, together with a great and noble knight, in the presence of the blessed Richard approached the local bishop on some matter of business, he was wearing a costume unbecoming to a clerk. The holy man saw the bishop suppress his feeling, but his own zeal for justice compelled him to do otherwise and he rose up and upbraided the clerk, saying, 'Is it fitting that you should appear before your bishop attired thus? I tell you that, if you belonged to my diocese, I would punish you severely.' Saying this, he loosened the fillet which the clerk was wearing around his head and said, 'Are you not content with the work of your Creator that you adorn yourself thus?' Moreover, the clerk had combed his hair forward over his head so that he would not appear tonsured and the saint, who was 'bald before and clean' according to the Old Law, plucked a hair from his own head and said, 'Perhaps I am to be criticised because I am tonsured?' (190)

I would have felt mean-spirited if I'd posted a picture of a person w/ a combover; with a dog, it's just funny. And, I KNOW, it doesn't take my thinking to note that this distinction is problematic ....