NCS Presidential Election as a Form of Torture 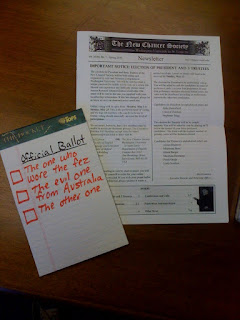 According to the latest New Chaucer Society newsletter, the three nominees for the next president of the society are:
Voting members are supposed to rank these candidates according to order of preference, so that should one pick the least popular scholar, one's second choice scholar then obtains one's vote. This system replaces the live version held last year in which candidates recited lines from the General Prologue, Simon Cowell and Ellen Degeneres gave feedback, and then society members phoned in votes to a toll-free number.

Seriously, though, how are we supposed to choose among these three outstanding candidates? Can't we have triumvirate? (or triumviragoate, if that is better Latin?) I don't know about you, but my vote will likely go to she who delivers the largest bribe: US dollars, Australian dollars, pounds sterling, it doesn't matter. The promise of drinks and dinners at Siena works as well; I'm easily swayed. Ardis, Carolyn, Stephanie: I'll be checking my email.

Also, I hope it won't poison anyone's presidential chances that one candidate has been reported by this blog as having worn a lampshade at a disreputable DC cocktail lounge, while another was described on In the Middle as "evil."
Posted by Jeffrey Cohen at 8:18 AM

I'd be very happy to see NCS adopt the radical Amazonian strategy of electing a triumviragoate (or triumfeminate or whatever we want to call it). Is this the first time NCS has seen a entire presidential ballot of women, by the way? (Anyone have the institutional memory here?)