A Book Prospectus for "A Beginners Guide to Early English History" 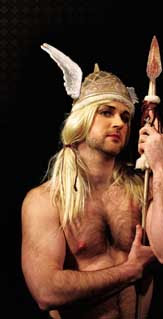 [do stay posted via In The Middle re: the annual meeting of the Medieval Academy planned for Arizona in 2011]

A couple of summers ago, I was contacted by an editor at Oneworld Publications in Oxford, UK [partly because she followed this weblog!], where they have this nifty little Beginners Guides book series, and she wanted to know if I might be interested in writing one of these guides for the Middle Ages, and for which I would have a certain amount of freedom to make it "quirky" [implication: like this blog's coverage of the Middle Ages]. I entertained the idea quite seriously for a few months but ultimately declined because, at the end of the day, I really don't think I'm any good at this sort of thing, and the thought of tearing myself away from my regular scholarship in order to write a guide, or a reference or introductory work, or "companion to" sort of book, is just not appealing, and even fills me with dread. My brain just doesn't work that way, although I admire like hell those who do write [and edit] such books, especially when they're such good ones [I'm thinking here, especially, of volumes such as Paul Strohm et alia's Twenty-First Century Approaches to Literature: Middle English, for Oxford UP's Approaches series, or David Wallace et alia's The Cambridge History of Medieval English Literature]. Of course, I sometimes regret a little bit saying "no," especially since the books in Oneworld's Beginners series are so small and beautifully-designed and affordable. And every now and then I think about what I could have done, given the opportunity, so this past weekend, with the help of a friend [Anna Klosowska], we devised a brief prospectus for a book we wish we could have written, given the chance, tentatively titled A Beginners Guide to Early English History. The main idea would be to focus each chapter on one (or two) lesser-known figures who would represent certain aspects of the historical period that remain, for whatever reasons, under-represented. And please, if we've missed anyone, do send in suggestions for additional figures and chapters. So:

Edwin hailed from a small freshwater fjord in medieval Norway. The third son of Halfdan Ragnarsson and descended from a long line of sheep-herders-cum-pirates and expert boasters, he accompanied Halfdan's expedition to England in the ninth century. As a small boy he liked to weave daisy crowns for the sheep and made small lambskin purses adorned with shells. Unlike the other Vikings, who liked to get drunk and sing battle poems all night, when he was a teenager, Edwin would stay in his room and read skaldic verses by Halfwilfrid, a Viking pacifist and great-great-great-great-great-great-great-great-grandfather of the British poet Wilfred Owen. He earned his nickname, "the nervous," on his first raiding voyage on a longship when he insisted on having his own "privy" [and hence the origin of the idea of a private toilet] and also because he fainted whenever Brod-Helgi, the David Beckham of his time, took his tunic off to row with greater ease of movement. While the other Vikings were drinking rum at night, Edwin would lay in his sling, reading Halfwilfrid's "Anthem to a Doomed Norse Youth." As they used to say of Edwin, "he was not so much into the raping," and when it came to the pillaging, while others were carting off women, chests of gold, jewelry, and weapons, he was taking down the curtains and measuring them to see if they would fit in the windows of his cottage back home. He eventually set up the first interior design business in the Danelaw, "Edwin's Interiors," which was especially famed for Edwin's creative facility with chintz.

Chapter 2: The National Embarrassments: Alphonse the Not-So-Great and Æthelred the Unready

While Alfred the Great was busy fending off Vikings, creating the Danelaw, founding a fledgling nation, and establishing a national vernacular literature, his lesser-known brother, Alphonse, who was more of an "athlete," was busy founding the first fraternity house, Alpha Tyr Rad, with his triathalon practice buddy, Æthelred the Unready. When they weren't practicing the triathalon together [which at that time, in 9th-century England, involved downhill skiing, target shooting, and raping a nun], they typically could be found passed out on the front lawn of the Alpha Tyr Rad house in Wilton, surrounded by dozens of drinking horns. It is a little-known fact that the convent of Our Lady of Perpetual Frustration, located in East Anglia, was founded by a group of Wilton co-eds with whom Æthelred, after the twelfth or so drinking horn, was perpetually "unready." As to the idea that his name, when he eventually became king, also indicated that he was either badly-advised or unwise, both were true, but what is not as well-known, is that he also had a bad case of attention deficit disorder brought on by too many acid trips in the East Anglian fens with the Welsh hippies who maintained St Guthlac's shrine.

Chapter 3: Ælfric Bata: The Real Reason Behind the Failure of Beowulf as an "Epic"

As is well-known, scholars argue endlessly over the dating and provenance of the Beowulf manuscript, and now, thanks to the recent discovery of a missing volume of the Colloquies of Ælfric Bata, who was an early eleventh-century high school teacher in the Canterbury Cathedral school, we now know that Kevin Kiernan's argument for an early eleventh-century date is exactly the case. As it turns out, every year in April Ælfric Bata would ask his senior students to write a national Teutonic epic as a group assignment, and in 1009, as we know from marginal comments in his Colloquies, he was infuriated by the penning of a certain "Beo-wulf the Haughty Geat," which, according to Ælfric, did not properly follow his prompts, thus leading Petrarch to later refer to the entire period in which Ælfric and his students lived as the "Dark Ages." Here are some of the notes Ælfric wrote to himself concerning his students' homework: "although its egregious length certainly puts it in the class of an epic, its numerous digressions are the clear mark of pot-addled distraction, not to mention the missing fifty half-winters of Beowulf's reign as king"; "a monster who lives alone with his mother in an underwater cave? you must be kidding me!!!"; "the theology in this poem is all over the map!!! are they christian, pagans, or devil-worhsippers? who can tell??!!??"; "how is this a national epic? I never heard of the Geats!"; "other than killing monsters, what else does Beowulf do? does he found nations, like Rome? NO!"; "the irrelevances are in the center and the serious things on the outer edges--it is too SIMPLE!"; "what, finally, is the point? don't steal cups from dragons?"; "the meter is completely irregular!"; "I specifically asked for a Dido-like love interest, and did I get it?--NO!"; "while the moral and spirit of it can be matched among the noblest authors, the thing itself is cheap!"; "doubtful the king will be much interested in this, so let's just keep one copy in the trash files and beat everyone who wrote it with a stick"; "final grade: F-".

Although it is a commonplace of Introductory guides to and anthologies of Old English literature to place Caedmon, a lowly and illiterate cowherd monk living in Whitby in the seventh century, as the "father" of English poetry, because he supposedly fell asleep in a cowshed and dreamed that he composed a Hymn to the Creation, the real story is that Caedmon was the first licensed Cadillac dealer in North Yorkshire and he was famous for his witty sexual epigrams, such as, "I write, I must confess, for dirtier readers, / My verse does not attract the nation's leaders" and "Of course we know he'll never wed. / What? Put his sister out of bed?" But when the Norton missionaries arrived in England in the late seventh century looking for the "unique" and "humble" origins of English poetry and also for women authors, they quickly realized they had a "situation" on their hands if the so-called "father" of English poetry was a Cadillac dealer who composed sexual epigrams in the style of a first-century urban Latin author, so they engaged in a sort of literary canon whitewashing. Equally frustrating for the Norton missionaries was the lack of women writers composing in England before the Norman Conquest, so they made up a story about double-monasteries in which women supposedly learned to read and write and exchanged racy letters with each other.

The Not-So-Saintly: The Lost Volume of Ælfric's Lives of Saints

I think that Ragnar Hairy Breeks has to be in there somewhere. "Project NjalsRunway," anyone?

Later on there was Margery the Lackluster, forerunner to that famous woman with the same first name from Lynn. Margery the Lackluster's lifelong desire was to be a renowned holy woman, or at least to be noticed, but she never had the enthusiasm to turn a small sniffle caused by reverent feeling into the a full fledged church emptying HOWL like Margery Kempe. People thought she just had allergies, and mild ones at that.

In re Edwin the Nervous, I suppose it takes a stereotype to break a stereotype maybe, but in fact I think those homo-erotically inclined in Viking-Age Scandinavia might have found it necessary to be more violent, not less, to find an outlet for their desires.