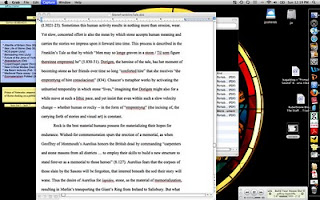 [snapshot of a leisurely Sunday]

Saying no came easily while I was department chair. As much as I like to travel, present work, and even sometimes publish the odd essay in places other than blogs, my time to do so was limited. Remember that talk on Mandeville I did in Saint Louis? I have fond memories of returning to my hotel room that evening and allocating the faculty merit raises for the year. Good times.

So I naturally convinced myself that once I was no longer department head, time would stretch languorously towards the bluest of horizons. Because of that misapprehension I have in the next twelve months committed myself to compose essays on Chaucer's (literally) rocky relation to Geoffrey of Monmouth; the sexuality possessed by medieval stones, especially diamonds; the publishable version of my York 1190 plenary; an abecedarium for the New Critical Modes issue of postmedieval; an introduction for a collection of essays on beheading; an afterword for a volume on monsters and monstrousness; a blurb for a new book on women and medieval disability; some lectures for a residency I'm doing at the University of Iowa; and piece on medieval race for a new critical theory handbook. A little further ahead, I'm co-editing another issue of postmedieval, this one on ecomaterialism. I also need to finish my book on medieval stone -- and with that in mind, will be applying for fellowships in the fall to try to get a year to write (a vain pursuit no doubt). Did I also mention that I am organizing a conference, the product of which will be a collection of essays? And, GW MEMSI (which has 54 fans on Facebook, so our impact is HUGE) enters its last year of funding in 2010-11 ... so I have to seek more support to keep the elephant well supplied with peanuts.

Then there's the travel. I'm fortunate, I get to be in many places during 2010-11. Several of these gigs are engagements I turned down while chair with the promise of doing them once my term was over. It's over, and so I am on the move. July brings New Chaucer Society in Siena, for which I've organized two sessions and will be presenting in a third, on blogging; September is a visit to the College of Charleston and a plenary in Berlin; October brings me to SUNY Buffalo, where the Medieval / Early Modern Student Association and the Center for the Study of Psychoanalysis and Culture have cosponsored me; November brings a trip to Copenhagen, where I've been invited to speak at a symposium on literature and identity formation at the Center for Canon and Identity Formation; then I'm off to Iowa in warm and beautiful February; April brings me to an invited talk at Northwestern; Kalamazoo looms in May; and, coming all the way round to July 2011, off to Australia to present at the University of Melbourne, where this person named "Stephanie Trigg" appears to do things.

And THEN I enter a cave deep within some hinterland and slumber for a few decades.

So, if you don't see much of me in the year ahead, you know why. Then again I am traveling so much you are more likely to in fact SEE me than you are to read anything I've been able to write. Here's hoping that your summer if off to a good start.
Posted by Jeffrey Cohen at 10:38 AM

Professor Cohen:
Do you know a specific date yet in October when you will be speaking at SUNY-Buffalo? I am moving to Buffalo this summer to begin a teaching position at another college in the area, and would love to try to catch your talk if my schedule allows it. Thanks,
Jeremy

Jeremy, I'll be there October 7.

It's not like this is a contest or anything, Jeffrey, but I think I'm a bit busier this summer and fall then you are. First, up, I have to spend 2 weeks in NYC and DC getting drunk and setting abandoned townhouses on fire while reciting Whitman's "Crossing Brooklyn Ferry." After I get out of jail [3 to 6 years with time off for good behavior], I have to travel to Luxembourg [early July] where I've been invited to give a plenary address at a conference on medieval pie fetishes. Inbetween time served for arson and reciting Whitman at inappropriate hours on the wrong side of the street [because everyone knows that on Tuesday nights it's the east side of the street for reciting Whitman and the west side for Dickinson and never after 2:00 a.m. for either] and the medieval pie fetish conference, I've agreed to write 75 "books in brief" reviews on texts written in Finnish for a Finnish medieval studies bi-daily newsletter and to also write the Afterword to a festschrift for Henry Bennett Wolfe, who, at 8 years of age and after 6 months at the Univ. of Heidelberg, where he conducted a brilliant career in medieval plant lore, is finally retiring. In addition, I'm working up several articles and book chapter and a dozen or so book Introductions on, variously:

Somehow, when all that gets done, I've also got to get ready to take over as interim provost of the newly established Univ. of Kyrgyzstan where I will also be running the yurt-building seminars and penning a history of the China Silk Route. I have a few more things to share, but I have to sign off now because the president of BP is on the line and needs my help.

Eileen, it is indeed busy inside your head.

Well, it *is* crowded in there, that's for sure.