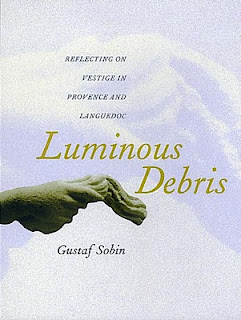 I want to thank Andrew Cole for having brought to my attention the work of the poet and essayist Gustaf Sobin. Andrew suggested that I read Aura: Last Essays, a short book that hovers between poetry and history. I devoured the whole thing on a Metro ride from Capitol Hill to Friendship Heights. If the engrossing volume had been any longer I'd have missed my stop.

I turned to Sobin's Luminous Debris: Reflecting on Vestige Provence and Languedoc just after finishing Jane Bennett's Vibrant Matter: A Political Ecology of Things. As their shared love of radiant adjectives attests, these books have much in common. Both argue that materiality is inherently active; that the human is an expansive and self-insufficient category best understood along with the landscapes, objects, substances, environments with which we make our identity-giving alliances. Both contemplate vestige, substantiality, and agency. Whereas Bennett is concerned mainly with the present (the vestige with which she opens the book is rubbish collected upon a storm grate in Baltimore), Sobin's critical eye is turned towards the distant past, from eoliths ("dawn stones," the first human artifacts) and "pebble cultures" (the Oldowan of 1.75 million years ago) to the construction of the Roman aqueduct of Nîmes (first century AD) and the structure's slow dismantling. Sobin's passion is prehistory, reading history from the material traces he recovers from the fields and mountains of France, from the perusing of archeological reports. Sobin does not turn to the past simply to know it in its own terms, however. He is an unapologetic presentist:


For myself, at least, the past per se holds little interest, and the present offers only the profound malaise of a culture increasingly devoid of the protocols of self-reflection. I've taken complete liberty in selecting, at will, specific objects, locations, and instances out of the past on the sole basis that they might serve, no matter how tenuously, that very dialectic. Nothing mattered in my choice of materials but the echoes, the mirroring images they might provide, but the reverberations they might create ... Living as we do upon the uppermost layer of a profound compilation -- one, that is, of wind, shadow, of voices buffeted by other voices -- we need to feel that this residency has been 'underwritten' by antecedents: that we, the living, are continuously accompanied by the presence, no matter how remote, of predecessors. That we're not, finally, alone. (4, 12)

It's hard not to think here of Carolyn Dinshaw's work: touching the past to feel some vibration that might spur the present to rethink the truths it assumes, to embrace the "the protocols of self-reflection," to wonder about contingency and possibility. Dinshaw, though, is in the end more of a historicist than Sobin, whose meditations typically end with a rather transhistorical moral about human existence, endurance, death, origins, community. Though an expat American, at such moments of drawing out the Big Theme and offering a typically pessimistic (towards the present) and existentialist (towards the past) lesson, Sobin seems to me at his most French.

Sobin's Eden is a prehistoric era when communities existed in balance with their ecologies, living off what the land provided and thereby possessing no need to steal domain or resources from others, possessing a community in which one does not feel the ache of isolated individualism. Debris (stones, rings, megaliths, pictographs, monuments) is luminous in that these vestiges of lost history illuminate openings through which we can reconceive both past and present. The past is, in his account, truly lost, in that we will never possess it in its fullness. Sobin writes of the impossibility of determining where Hannibal crossed the Rhone, or what path the Carthaginian general took through the Alps; he describes a potsherd unearthed at Saint Blaise as "the still living filament to a lost luminosity" and the key to a door that "has long since vanished" [144]; he argues that we will never know where the disappeared polis of Aeria, "City of the Air," was located, rendering its name a resonant locution without stable location. The Greek geographer Strabo described Aeria as "altogether aerial, constructed on a raised promontory of its own" and indicated proximity to Orange and Avignon. Its site has never been discovered, though, and likely never will:


For Aeria seems to exist free of the very floors and crypts and quarried vaults in which it was once rooted. In an age of reductive analysis and infallible detection, it continues to resist any classification whatsoever ... There's safety, we can't help thinking, in its indeterminate status ... Buoyant, suspended, eminently diffuse, the vocable alone, in eluding us, justifies our fascination. Escaping our own stultifying structures, it gives the imagination a late palce in which to muse, meditate, linger, if for no more -- indeed -- than a passing moment (172-73)

Beautiful, isn't it, this meditation on ethereal habitation? Luminous Debris is filled with such moments, passages so gorgeous they make your eyes water. Although I described him as a pessimist when it comes to the present (he says we turn to ancient history's detritus to discover some weight there, something to anchor our drifting, nonviable now) Sobin is here and elsewhere full of quiet hope: unlocatable fords and passes, lost portals and unmappable cities of the sky offer an invitation, an escape, not a loss. The questions matter more than "the mean trickle of 'verifiable fact'": "Might we even begin constituting, indeed, a collection, an entire library of questions? A whole, inexhaustible archive devoted exclusively to wonder, to query, to the unlimited breadth of human speculation?" (54-55).

If there is a downside to Sobin's essays, little commitment exists in the book to see the world through a nonanthropocentric point of view. Contemporary and historic human meaning typically trumps any agency that objects might possess outside of the hands that fashioned them once and touch them now. Indeed, whereas Bennett's Vibrant Matter examines the world's materiality as coexisting with and potentially indifferent to humanity, Luminous Debris is most invested in tracing the peregrinations of homo faber, the artist who leaves ineradicable traces upon stones, metals, landscapes. In Sobin's account environment does exert force (in the form mostly of water or persistent wind, like the winter mistral), but landscape and humans are seldom the coequals that Bennett makes them.

In rereading what I've composed above I see I've barely done justice to Sobin's rich work. He has so much more to say than I've accounted for here: about quarries as figures for memory, since they indicate only the blocks that have been removed from them (132-33), about tombs that mark where lightning hit the ground as marking changes in the gender of culture; about windscapes, reading ruins, the rock-like endurance of toponyms, aqueous peoples, the violence of numbering systems, archeological lyricism, food storage devices as a form of alienation, domestic infant burial as resistance to the afterlife, decapitation's relation to art, stones imprinted with waves as a beautiful opposition to humanism, bridges that pass not across water but open up possibilities of middle-dwelling, of Being, of an aqueduct that doesn't connect a city to its freshwater spring so much as history's abandoned possibilities to a Now that has quickly exhausted itself. Let me end by urging you to read the volume yourself, and see if you don't find yourself completely entranced, wholly absorbed, in love with his poet's language and philosopher's heart.
Posted by Jeffrey Cohen at 10:13 AM

Thanks for this nicely composed appreciation of Gustaf Sobin. His writing has been a revelation to me, especially his knack for combining poetry with pre-historical detective work. Although based largely on data accumulated by others, his acumen rivals only The Girl with the Golden Tatoo. I am trying to apply the same approach to the Stuttgart Psalter, a largely ignored Carolingian Psalter (the Utrecht Psalter gets all the attention), which I think is fairly bursting with hidden information about life in the early ninth century.