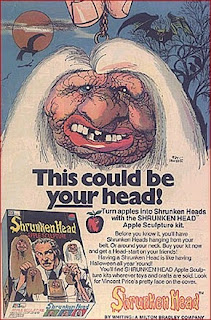 by J J Cohen
[Kat Tracy asked me to compose a short foreword to a forthcoming edited collection she has edited with Jeff Massey called Heads Will Roll: Decapitation in Medieval and Early Modern Imagination.]
Because I was a child prone to nightmares, my parents celebrated my tenth birthday with the gift of a Shrunken Head Kit.
I’d asked for the kit for the same reason that the only books I checked from the library featured ghosts, dark magic and lethal demons: I feared these things, and was therefore drawn. Promising that “Before you know it, you’ll have shrunken heads hanging from your belt,” the macabre craft set was manufactured by Milton Bradley, the same toy company that created wholesome, normalizing amusements like The Game of Life. The goal of that classic board game was to marry, fill a car with offspring, and retire with as much horded wealth as possible. The Shrunken Head Kit, on the other hand, did not promise to convey its purchasers to the same unimaginative destinations at which their parents had arrived. Its box contained physiognomic templates to place on apples (not included), which were then to be carved to give the fruit a nose, mouth, eye sockets, and ears. These peeled and sculpted apple heads would then be dipped in vinegar, rubbed in charcoal, and suspended above a small lamp-like apparatus for several days. Eventually the fruit dried into a pungent orb that uncannily resembled a diminutive severed head.
Aspiring Maori would then add to these creations black beads to reside within the eye sockets and fractured teeth for the agape mouth. A hair-like substance was draped from the apple’s stem, while a looped piece of cord for display completed the totem. As I think fondly back on the dozens of shrunken heads I manufactured with this kit, I can see them grinning at me in fruity, anthropomorphic glory. Even if these decapitated creatures that had never been whole possessed eyes with a perturbing ability to make me feel under constant scrutiny, their wrinkled and fragrant skin reminded me of my grandmother.
The Shrunken Head Kit was endorsed by no less a celebrity than Vincent Price. His image appeared on its advertisements (mostly in comic books) and was emblazoned across the box’s cover, where he held an apple head in each hand. Two heads leered behind him, with a fifth in process in the same “laboratory” that the kit promised its purchasers. Though the box announced “A Craft for the Whole Family,” I knew that Vincent loomed upon its front to ensure that the majority of the family would be repulsed. A smaller demographic would beg mother, father, siblings, aunts, uncles, anyone to buy the thing for them. Vincent Price was an icon from horror films; his visage promised terror and titillation rather than family fun. One reason I wanted the kit so much is that I had seen its celebrity endorser in so many Creature Double Features, the B-grade monster movies that then occupied my Saturday afternoons. I devoured these films for the same reason that I wanted the Shrunken Head Kit: trepidation (I was one of those children whose world was fragile, limned with monsters) engendered fascination (if only I could understand better how the world worked, how that which menaces might be banished). Watching my fears and desires enacted by the Blob, a vampire, a mutant space beast, a headhunter was a way of participating in their narrative unfolding, and helped me to embody and partly master that which caused me anxiety. Decapitation is, in other words, a kind of monstrosity: evil and abject and identity-destroying; fascinating, alluring, unthinkable, utterly engaging. The Shrunken Head Kit was pleasure, guilt, violence, darkness, art, assimilation of cultural alterity, and memories of grandma all in the same package, and therefore one of my favorite childhood toys.
Beheading would have meant something rather different had I not been a ten year old boy, or had I come from a culture that collected, venerated, or created real severed heads rather than one in which decapitation arrives from distant geographies and histories (or in craft kits). Real decapitation -- present day executions, industrial accidents, murder, terrorism -- seemed unreal to me; all I knew were its representations, beheading not as violence committed against a person so much as fantastic public spectacle. When the Green Knight holds his axe-hewn head aloft to glare at Arthur’s court in the fourteenth century romance Sir Gawain and the Green Knight, that dismembered bodily fragment no doubt condenses some version of the pleasure, guilt, violence, darkness, aesthetics, and cultural assimilation I spoke of above. But the scene unfolds within generic expectations that we no longer possess. Decapitation dramas involving giants are a topos in romance; beheading figures prominently in medieval Welsh and Irish narratives as well. Criminals and political enemies might be dispatched through beheading; Saint Denis rebukes his executioners by collecting his severed head and walking six miles, sermonizing all the way.
As the essays in this collection detail, heads can be sacred objects, trophies, apotropaic devices, admonitions. Because beheading nullifies personal identity (the acephalic body is a corpse without history, personhood, individuality), decapitation seems the most violent blow against subjectivity, against one’s individualized being. And yet the head without body entrances. With its eyes that do not blink, or through empty sockets darkening a skinless skull, the severed head gives the impression of gazing back, of staring at its observers to pose relentlessly a question that we cannot seem to answer, cannot even understand, but a query that troubles and compels all the same. These contradictory emotions that beheading elicits are well analyzed by Gustaf Sobin, who writes of prehistoric skulls discovered in Provence:

These decomposed heads possess a barbarous magnetism, for they still manage to inspire the most archaic of all psychic reactions: ambivalence itself. Holding us between repulsion and respect, terror and deference, we’re still, it would seem, affected by these gutted husks … [They] belong neither to this world nor the next, but to that wavering interface, the intermediary realm between being and nonbeing, the living and dead. Threshold figures, they command passage.

Threshold figures, they command passage. I love that line, because it so well gets at the cultural work of the representation of decapitation as described in the essays in this volume: intertwining violence with aesthetics, horror with art, death with strangely affirmative stories for life. Decapitation is surely a kind of monstrosity, the becoming-monstrous of the human through fragmentation, through the reduction of embodied identity from five limbs and torso to a liminal object, an uncanny thing. Yet like the severed head of the Green Knight, this posthuman monster speaks, suggesting that we have much to learn from the pages that follow. I won’t describe this volume as “A Book for the Whole Family,” but I will give this benediction: Enjoy your monster. I certainly did.
Posted by Jeffrey Cohen at 4:36 PM

Fun! I look forward to your capital foreward. For more amusement, I uploaded to Flickr the stream of decapitation pics which I used for the lecture version of my essay.