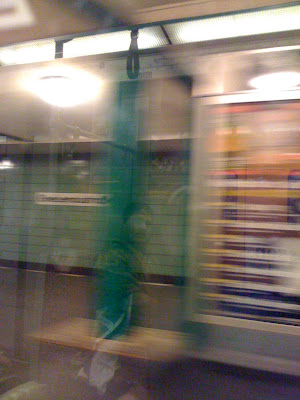 An unexpected pleasure of Berlin: the U-Bahn, its sprawling subterranean train system. The hotel at which the conference speakers were housed was in Neukölln, some distance from the city center, since the Berlin marathon meant that all the close-in hotels were booked. Known for its multi-ethnic population, its high unemployment rate, and its general lack of much else, the area is far to the southeast. Near our hotel were some tree-lined streets with parks and housing, a Shell station, a Toys-R-Us, a bakery that for three euros would fill your bag with pastries, and a general quiet. Each morning I would board the U-Bahn 7 at Grenzallee or Neukölln. I'd put on my headphones and listen to the Broken Bells album that Alex had urged me to upload onto my iPhone before I left. A litany of stations rolled past as I listened, and I loved mouthing the names of each: Karl-Marx-Straße (for the people!), Hermannplatz, Südstern, Gneisenaustraße (oh how I enjoy saying that word), then Mehringdamm, where I'd switch to the U6 and Hallesches Tor, Kochstraße, Stadtmitte (a word that reminded me of this blog, since to be there is to be in the middle), Französische Straße, and finally Friedrichstraße, the bustling intersection of lines at which Humboldt University is located.

This was my morning devotion, performed in a subway with the Brandenburg gate etched upon its windows, a swirl of people coming and going as I sat, the soundtrack my son had gifted me perfectly accompanying the performance.
Posted by Jeffrey Cohen at 5:21 PM