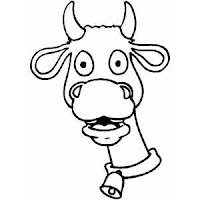 But today is that day, thanks to closet philologist Dana Milbank. Senator Alan Simpson recently remarked that "We've reached a point now where [Social Security is] like a milk cow with 310 million tits!" Outrage ensued, Simpson apologized, and now Milbank writes that despite this "udder debacle," he shouldn't have:

Simpson was merely paraphrasing the satirist H.L. Mencken, who once said FDR regarded the government as "a milk cow with 125 million teats." Tit is a variation of teat, from the Middle English tete, from the Old English titt, from the Middle High German zitze. It's vulgar when referring to a woman's anatomy, but Simpson was talking about a cow.

The better question is when did "tit" become vulgar? See here. And when did it begin to refer exclusively (in the non vulgar sense) to cows and other mammals?

In ME, medical treatises use teat/tit, so it's clearly not vulgar. Nor does ME (or OE) distinguish between human and nonhuman teats/tits.

But from (at least) the 20th century on, 'tit' is vulgar (OED s.v. 'tit,' n6) and refers exclusively to humans. Milbank's being (at best) silly, as is his asinine habit. Unless Simpson is a great deal older than he claims to be, he was clearly being his usual irascible, patronizing self.