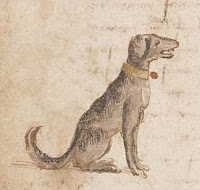 In the wake of well received sessions on “Animal Discourses” at the recent New Chaucer Society conference in Siena, I plan to propose a collection of essays on animal agency in Chaucer’s works.

When he rhymes human longings to visit holy sites with birds’ corages, “pricked” by Nature in the spring, what relationship does Chaucer imply? Does he slyly reduce the pilgrims’ motivation to a biological urge? Does he, on the contrary, use springtime revivals in nature as metaphoric vehicles for spiritual renewal? Or is the connection more balanced, an observation of real avian behavior that resonates in undefined ways with human desires and acts?

Understandably, most critics have looked to Chaucer’s birds, horses, dogs, and so forth primarily for what they signify about human characters and concerns. But recently, scientists and others in animal studies have reminded us of what Chaucer and his contemporaries had daily reason to witness: that nonhuman animals communicate, intend, and act in their own right. A focus on animals as agents can enlarge our understanding of Chaucer and of creaturely existence.

Susan Crane and David Lawton are coordinating a theoretically focused collection emerging from the NCS “Animal Discourses” sessions, but some who attended those sessions expressed an interest in more textually grounded discussions. I’m hoping that this volume can show newcomers, especially Chaucerians, the potential of cultural animal studies. On the other hand, we might disrupt the tendency of some people in animal studies to assume that medieval and early modern writers held rigid, doctrinaire conceptions of animals and animal-human relations.

Here are a few possible areas of focus:


I [which is to say Carolynn: says Karl] have corresponded briefly with Caroline Palmer of Boydell & Brewer, to whom I plan to send a proposal with a set of abstracts. I’m now broadening the call for abstracts beyond the eight or nine NCS panelists who have already told me that they plan to participate. I invite immediate expressions of interest and would like to have abstracts (300 to 600 words) by December 15. Ms. Palmer has requested that each abstract should indicate clearly how the essay in question relates to the overall theme of the volume.

What a marvelous idea for an essay collection.

Looks great; I really should restrain myself, especially given the minor fact of lack of real expertise in Chaucer, but can't help wanting to propose an essay.

I look forward to seeing this work.