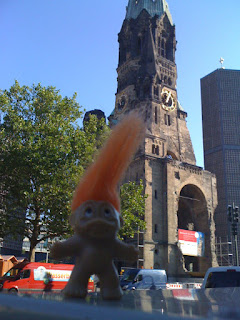 Despite a warm auditorium with a failing sound system, despite a protest complete with marching band that kept passing the windows that opened onto Unter den Linden, despite losing my place several times and stumbling over some words I know well due to sudden drums and trumpets, I do believe that my keynote on "The Sex Life of Stone" went well last night. I was asked some very good questions: could I have invoked the fetish for the object-autobiography I was doing? (no, if the fetish is an accomplice to a human story) Was I arguing for a return to magic? (José Muñoz asked this one, and I replied: yes, if by magic we mean nonhuman agency) How can we know that the inanimate desires? (by watching its movements and connections over long periods of time: and isn't that also true of us humans? Volition and self-knowledge aren't prerequisites for desire). Are there limits to the queer? (No, and yet we are constantly struggling to impose such limits because, quite honestly, there are places many of us do not want to tread).

I then went to dinner with some of the conference organizers and a graduate student from GW who presented earlier in the day. After only one drink each, we came up with the best international money making scheme ever: a Star Trek Christmas special with a holiday song by Lady Gaga. I believe the plot of this holiday special involves Santa becoming stuck in a transporter and the Star Trek crew ineptly delivering gifts from the Enterprise while being pursued by an alien who hates trees with sparkly lights. Or something like that.

And if you are wondering at the photo that illustrates this post card: that's Lucky Junior, a small troll owned by my daughter Katherine. She was very sad about my leaving for Germany, so I offered to bring Lucky Junior with me and photograph him around town (this one was taken at the Gedächtnis Kirche). I've been texting her the pictures. It's helped both of us.
Posted by Jeffrey Cohen at 2:07 AM

Are there limits to the queer? (No, and yet we are constantly struggling to impose such limits because, quite honestly, there are places many of us do not want to tread).