The Wolf Child of Hesse: Walking and Not Walking with Wolves 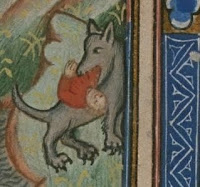 CFP BELOW! Submit!
Amid a fruitless search for a Dutch fish knight1, I accidentally discovered a wolf boy, the earliest, so I later read, of Northern Europe's historical tales of feral children (p. 23). But you, being a medievalist, know that this is not quite so: you remember Wolfdeitrich and Guillaume de Palerne, perhaps less historical, but certainly much earlier; you may even remember two still earlier Northern medieval children, about whom more anon. Here's our first child, from the continuation of the Chronicle of Peter of Erfurt:

1304. A certain boy in the region of Hesse was seized. This boy, as was known afterwards, and just as the boy told it himself, was taken by wolves for three years and raised up wonderously. For, whatever prey the wolves snatched for food, they would take the better part and give it to him to eat while they lay around a tree. In the time of winter and cold, however, making a small pit, and picking up the leaves of trees and other plants, they placed them on the boy, and, putting themselves around him, they thus protected him from the cold; they also compelled him to creep on hands and feet and to run with them for a long time, from which practice he imitated their speed and was able to make the greatest leaps. When he was seized, he was bound with wood (?) to compel him to go erect in the manner of a human. However, this boy often said that he much preferred to live among wolves than among men. This boy was conveyed to the court of Henry, Prince of Hesse, for a spectacle. [EDIT @ 9.30.10, 12:19pm: THANKS! For translation help from the Chaucer Blogger himself, Brantley Bryant. You're a true gentil]

Forgive the loose translation, and feel free to correct it; feel free as well to insist on the impossibility of such a thing, but know that "L." in Notes and Queries beat you to it by a century and a half. Google book searches indicate that this story's not unknown, but for whatever reason, it tends to be dated 1344, as it is here in an 1858 treatment of human reason by an abbot with the aptonym of Lupus. I suspect an early typo (the feral child website, however, avoids the error).
I've little to say here, except that I suspect I've opened an avenue for future research. For the time being, I present an earlier analog to the above story, from Caesarius of Heisterbach's thirteenth-century Dialogus Miraculorum: we students first hear the monk speak of a girl kidnapped from her village by a wolf to pluck a bone from the throat of another wolf, and then we tell our own tale: "Ego quendam iuvenem vidi, qui in infantia a lupis fuerat raptus, et usque ad adolescentiam educatus, ita ut more luporum supra manus et pedes currere sciret, atque ululare" (I saw a certain youth who was snatched up by wolves as an infant and was raised by them into adolescence, and he knew how to run on hands and feet in the manner of wolves, and how to howl). We speak of this as if this is not a disability. It is not that he didn't know how to walk or talk like a human; it's that he can do these things like a wolf. He can do more than humans can.
And then see this, also from the thirteenth century, from the exempla of Jacques de Vitry.

A she-wolf stole and suckled some children; when, however, one of the children attempted to stand upright and walk, the wolf struck him on the head with her paw, and would not allow him to walk otherwise than like the beasts, on his hands and feet. (source; for the Latin, here)

It would be foolish to claim some pattern of development for this story from the early thirteenth to the early fourteenth century. It would be foolish--although it's often been done--to claim a reality for these stories apart from the reality of storytelling. These are not, as some have claimed, autistic children, falsely believed to have been among wolves. They're just stories, which is to say, they're everything.

All we can do is to identify variations on a theme, and to observe that these variations speak of different ways of thinking through animality, childishness, and the wild. There's one child. One or more wolves, who might be a lady wolf (Jacques de Vitry) or a man wolf (Guillaume de Palerne). The wolf/wolves raise the child, feeding it either with wolfmilk or with meat. In one instance, the wolves protect the child by providing it with clothing made of leaves, recalling both the humanist cliché on the fundamental helplessness and nakedness of humans and the clothing of the first sin, worn for a time in Eden. The child walks like a wolf, either willingly or unwillingly. The child's lupine walking is either a disability (needing 'correction' from medical technology) or a skill that in no way impedes the child's ability to walk upright. In one instance (that I've so far found), the child learns to howl (but we hear nothing of whether the child can bark). The child generally returns to human society. In only one instance (that I've so far found), the child tells its own story, and it's one of regret over being back among humans.

There's clearly a world of feral children reading for me! Looking forward.

(image from here, detail of New York, Columbia University, Burke Library at Union Theological Seminary UTS MS 051, f. 143, Eustace standing in the middle of the river with the lion and the wolf on either side, each with one of Eustace's sons in his mouth.)