bride of all unquiet things 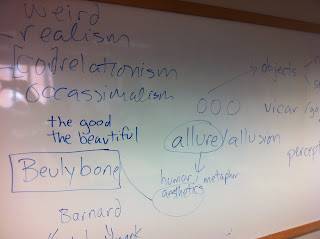 A rush to the office interrupted and slowed: the neighbor taking the train to Baltimore, the offloading of the Metro at Van Ness for untold reasons, the woman ahead of me who needs to pay for a bagel water croissant and coffee separately thank you, my inclination to be lost in music or the early rising of the sun, and how even refuse is gold.

But today I want to write, no matter that I'm giving a talk at Northwestern tomorrow, I have a class to prep, my To Do list is at five.

direct interaction between entities is impossible (inscrutable depths)
Last night in my Objects seminar we read The Erle of Tolous with the work of Graham Harman, Object Oriented Ontologist extraordinaire.

We mapped key terms, wondered at the ethical import of granting objects the dignity of unplumbable depths, of innate withdrawal into untouchability. We found useful his idea that causation is vicarious: that no real or sensual object can touch another without the agency of a vicar, a medial agent. These vicars might be those figures who throughout the seminar have carried designations like angel, messenger, intermediary, latimer, go between, nurse, councilor, sonde [sending, message, sound, embassy, gift]. Harman holds that contact between real and sensual objects -- which is also called intentionality, sincerity, perception, consciousness, and relation -- is asymmetrical, an "influence without recompense," donation without expectation.

We noted Harman's philosophical precision ("As a result, there must be a plurality of properties and relations in the simple substance, although it has no parts" "a quartet of time, space, essence, and eidos, all resulting from the tension between a specifical asymmetrical pair of object and quality"). We also observed the work of metaphor in his work, the poetry that quietly labors aesthetically and performatively while the analysis does its louder business. Harman envisions "a world packed full of ghostly real objects, signaling to each other from inscrutable depths, unable to touch one another fully." Vicarious causation is not, he insists, "some autistic moonbeam entering the window of an asylum." An autstic moonbeam piercing an asylum? The metaphor is unfathomable, and that is perhaps why it is so compelling. In the wake of such images, after the impossible possibility of a self enraptured lunar ray has glimmered, who would want to be on the side of those dry philosophers who invoke the "dull realism of mindless atoms and billiard balls"?

There's no transcendence in this subsurface system, "not even distance." We are "moles tunneling through wind, water and ideas no less than through speech-acts, wonder and dirt" ("Vicarious Causation" 210). We reside in an infinite subterranean milieu, "numberless underground cavities," but it's a place of neither finitude nor negativity. And those sparks from that distant satellite do penetrate from time to time, calling us to a wide sublunary world:


an archipelago of oracles or bombs that explode from concealment only to generate new sequestered temples. The language here is metaphorical because it must be. While analytical philosophy takes pride in never suggesting more than it explicitly states, this procedure does no justice to a world where objects are always more than they literally state. Those who care to only generate arguments almost never generate objects. New objects, however, are the sole and sacred fruit of writers, thinkers, politicians, travellers, lovers, and inventors (212)

This generation or poesis happens most frequently through the conveyance that is metaphor, which might also be called allure (215). That which is transportive, wonder inducing, and prolific constitutes an ethical aesthetics, both beautiful and good.

leading to a vertigo or even hypnosis in the witness
In The Erle of Tolous, the Emperor of an impossibly distant country ("Farre yn unknowthe lede") that happens to be nearby Germany bears the impossibly remote name of Dyoclysyan (Diocletian), as if he ruled early Rome. An unjust monarch, Dyoclysyan is married to Dame Beulybon. She understands just sovereignty, and and she bluntly advises her spouse that he ought not to annex lands that do not belong to him, thereby disinheriting those who possess them. Like almost all the men in the text, Dyoclysyan ignores Beulybon's words, but cannot imagine a love deeper than the one that draws him to her: were she gone, he says, he would commit suicide.

Beulybon is indeed radiant. The description of her face and form unwinds for twenty six lines (331-57). And why should she not be as gleaming as "an aungell of hevyn"? Her name after all means "the Beautiful Good" [beau + le bon]. She is an ideal, a celestial principle that recedes from every human relation: present enough to call men to best behavior, to fidelity and the honoring of oaths, but not present as an embodied subject. To attempt to touch this figure who prefers her splendid, ethereal isolation is to perish. Every man who beholds her -- or even hears of her beauty -- falls in love, and any who speak that love or (worse) trick her into extending her palm die horribly, bodies in pieces.

Only Sir Barnard, the wronged Erle of Tollos, realizes that Beulybon can be approached only through an intermediary. He captures one of Dyoclysyan's men. He disguises himself as a hermit, and is guided by his captive to a place in the court where he can catch sight of the wife of his enemy. Beulybon knows what this "hermit" is up to, and with the alms she sends to him she includes her ring: the only tangible gift she will bestow in the narrative, the only object in this text that serves as an emissary. She sends the jewelry quietly and with no expectation of return. She alters Barnard through the donation: he will become a mighty knight, a monk, a horse merchant, an avenger, a husband. Beulybon meanwhile withdraws from relation, speaking a law ignored at its every utterance. She proves lethal to all around her -- most tragically to her carver, a knight of twenty who is tricked into hiding naked in her bedroom so that she will seem an adulteress, a "hore." Though a mediatrix who models herself after the Virgin mary, she is spectacularly unsuccessful in making the world more livable for anyone, including herself. Without Barnard disguised as a monk to rescue her from fire, she would have been incinerated for her supposed crime (a punishment she accepts without protest).

Only Bayard is strong enough to bring Beulybon into meaningful relation, into a state of change. He does so by never touching her, by never attempting direct access to whatever Beautiful Good she incarnates. He is therefore the only person in her life who does not die. As the tale closes Dyoclysyan conveniently expires after three additional years of marriage. She is free then to wed Bayard, who has been elected emperor in his predecessor's stead. Through this touch -- now seeemingly direct, now for once not deadly -- Beulybon loses her abstract qualities and experiences "joy and myrthe." It may be that her new life (twenty three years as a wife and mother to "chylder fifteen") is a diminution, a disappointment, mere reproductive futurity. It may also be that she has at last found that an ethical stance allows for withdrawal, allows for an ethics that one speaks but doesn't necessarily live, but such a seemingly serene existence is doomed to solitude. Just ask Bayard, the most sociable and least cloistered hermit/monk ever to progress through a Breton lay.
Posted by Jeffrey Cohen at 10:47 AM

Sentences
lie down next to each other, but don't touch. Species is ecstatic. Like everyone else, after some years of refusing to touch, I touch, having avoided touch because it is a thoroughfare. For nerves. A nerve has a charge. In this way, a sentence is fundamental to the sensorimotor sequence. Its discharge. Its completion. But I don't want it to. I don't want to complete it all at once. I don't want to -- not today -- arrive.

Hello, this is just to let you know that I am a follower of this interesting blog
all the best
Paolo [historian, writer, (his)storytelle and publisher from Italy]