Everything in Heaven is in Utter Chaos; The Situation is Excellent: Orbitechture II Exhibit 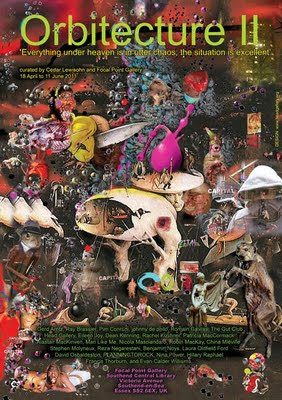 As many readers of this weblog know, we are a bit obsessed here with matters of time, inter-temporality, and especially long futurities, even when, perhaps perversely, that futurity is always already in the past [and the past, likewise, has already gotten ahead of us]. Recently, I was asked to contribute a text-object to two combined gallery exhibitions [@Head Gallery, an online artspace in New York City and @Focal Point Gallery, Essex, UK]: "My Spinalcord Traversed by the Axis of the Planet" and "Orbitechture II: Everything Under Heaven is in Utter Chaos; The Situation is Excellent," respectively. The curators [whoever they might actually be--and who knows? as no names were attached to the invitation], indicated that the artwork

should take the form of a written description of an object which might be an artwork: an art object from the future, after an apocalypse. . . . we are interested in how the recent speculative turn in philosophy--although we are not suggesting you would characterise youself as a 'speculative realist'--would express itself as an actual art object, particularly if this object is itself projected into some future setting, after some imagined catastrophic event that changes the very conditions that restrict or determine the way we function.

Here is an opportunity, I thought to myself, to combine my interests in the medieval, in the postmodern, and in what Graham Harman has called a "weird realism." I may have failed here, because I'm not sure my piece is "speculative" in the exact way the curators may have intended [by way of the recent "speculative turn" in Continental philosophy], but it was fun to write, nevertheless. The combined exhibits will also feature text-objects from Nicola Masciandaro, Reza Negarestani, Ray Brassier, Robin Mackay, and China Miéville, among others. I append my piece here, and here, also, is a link to a .pdf version.

The other one, the one called Borges, is the one things happen to. . . . I do not know which of us has written this page.

after the style of Borges, and for Borges

As is well known, the 20th-century author known as Borges, by means of an obscure Symbolist sonnet technique, doubled himself and continued to write, often at odds with his double (Borges2, for our purposes, although we admit this is a crude representation of what is meant here by ‘double’), for a period of some decades. It has been noted as well that many of the characters, and occasionally the cities, authored by Borges1 were also doubled, or were split into two separate bodies (with ‘body’ here loosely defined as ‘location’), sometimes residing in different temporal zones as well. Hence, the Sinologist Stephen Albert and Albert the city. Pierre Menard and Miguel de Cervantes. Pierre Menard and Pierre Menard. The blacksmith of Aventinus and his son. James Alexander Nolan and Shakespeare. Marcus Flaminius Rufus and Homer. And so on and so forth.

Recent activity monitored in the sector formerly known as Buenos Aires indicates that, due to an unfortunate action, during the planetary catastrophe, of one of the Argentinian engineers, who attempted to unfold the implicate order using a vintage toaster oven, Borges may have triangulated and is now traveling, disguised as a monograph on Liebniz’s Characteristica universalis (Nîmes, 1904), to the sector formerly known as Babel, with the intention of getting into the Library. It is not clear what he plans to do there, although since it has also been reported that Borges3 is accompanied by a jaguar, it may be safe to assume that Borges, Borges, and Borges plan to ride into the Library on the back of the jaguar in a leather satchel specially designed to protect ancient manuscripts, and once in there, to trample the incomprehensible books and also burn them.

In anticipation of this probable outcome, it is advised that the Royal Councillors of the Library should immediately begin construction of an underground prison, made from stone, that would be shaped as a nearly perfect hemisphere, although the floor itself should be somewhat less than a circle, in order to make the prisoners feel as though the place is too big and too small at once. A dividing wall should be built down the center, with a small gap at the top and a long, barred window set flush with the floor, and we advise placing Borges, Borges, and Borges on one side and the jaguar on the other. Once each mid-day, throw down, through a small trapdoor in the ceiling, some water and meat, at which point, for a brief moment, the prison will be flooded with light and Borges, Borges, and Borges and the jaguar will briefly see each other, then just as quickly be plunged into darkness again, with the only sounds the breathing of Borges, Borges, and Borges, and the pacing of the jaguar whose steps will measure the time and space of captivity. Finally, at the same time each day, also add exactly one grain of sand to the prison, and after 465,362 days Borges, Borges, and Borges and the jaguar will finally be suffocated.

If the Prefecture determines that this means of torture and slow death is too light-hearted or baroque (although please note that it provides the Librarians with a daily break from their annotations and indexing), we recommend sending out a team of caliphs to meet Borges, Borges, and Borges and the jaguar at the entrance of the Library, and because we know Borges, Borges, and Borges and the jaguar are possessed of unfailing kindness and politeness, have the caliphs ask them if they wouldn’t mind, before being admitted to the Library, reciting the commentaries of Averroes. That will allow the engineers the time they need to set the missile coordinates.

One clarification: by “recent activity monitored in the sector formerly known as Buenes Aires,” we are referring to a letter found by Emma Zunz in the rear entrance hall of her house, after returning home from her daily shift at the Lowenthal textile mill. Although the letter is ostensibly written by a “Fein,” or “Fain,” a boarding-house friend of her father’s who wanted to communicate to her the news of her father’s supposed suicide by overdose in a hospital in Bagé, analysis of the letter’s envelope by forensic experts indicates the presence of trace elements of saliva whose DNA closely matches (98.765455678%) that of a triplicate Borges. The next closest match (98.765455673%) is a man named Albert Feintster, long deceased, who was the proprietor of an antiquarian bookshop in Asia Minor during the period of the Great Migrations (circa 5th century C.E.). The threat of a triangulated Borges, therefore, in our estimation, should not be taken lightly.1

1Letizia Álvarez de Toledo has observed that this ‘field report’ is fradulent and likely plagiarized. Further, there was never an author named Borges.

I understand very little of this post, less than the poorest rhapsode. It has been eleven hundred years since I last wrote it.

Also, and apropos of nothing, and I assume this is randomly generated, but maybe this just means even artificial intelligences have senses of humor: the word I just had to re-type for "word verification" was: "peecrist."

@ Eileen: How can one do otherwise than submit to Tlon?

In homage to your homage to Borges, Eileen, I took the liberty of recreating the entire post from scratch, but with such a desire for a true representation that it does not differ by a single word from the original.