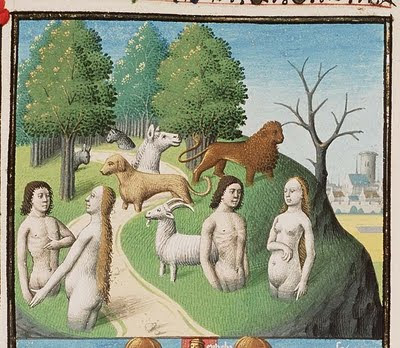 Figure 1. Animals and Humans Emerging from the Earth Together; taken from an illustrated manuscript version of Augustine's City of God, c. 1475 (The Hague, RMMW, 10 A 11, fol. 300v)

The time has come, the Walrus said, to speak of many things, and also to pass on two more audiofiles of featured talks from the recent GW-MEMSI "Animal, Vegetable, Mineral" conference, by Karl Steel and Sharon Kinoshita: "With the World, or Bound to Face the Sky: The Postures of the Wolf Child of Hesse" and "Animals and the Medieval Culture of Empire," respectively:


Karl Steel, "With the World, or Bound to Face the Sky: The Postures of the Wolf Child of Hesse"


Sharon Kinoshita, "Animals and the Medieval Culture of Empire"

While Sharon's talk sketches out, through literary and historical texts, an anthropological-sociological zoohistory that delineates the ways in which animals functioned in networks of cross-cultural diplomatic exchange between medieval empires in the Mediterranean, Europe, and Asia--not just as markers of religious and cultural difference, but as active trans-mediators in these networks, Karl's talk explores the possibilities of what he terms "concarnian" companionship between animals and humans who might find themselves as "messmates" at a common table where they also possess equally "precarious" lives, rather than as opposing figures in a binarized and hierarchized bipedal/quadrupedal or upright/lower or human/animal world. In a particularly compelling story about the "wolf child of Hesse" found in a 14th-century continuation of Peter of Erfurt's Chronicle, Karl finds ample room to undertake what Derrida coined a "limitrophic" investigation of the human/animal boundary: a study of "what abuts onto limits, but also what feeds, is fed, is cared for, raised, and trained, what is cultivated on the edges of a limit." Most moving for me about Karl's paper was his argument that, ultimately, all bodies--whether trees, wolves, or humans--can only ever pretend to be "upright," for we are "all down here, entangled, somewhere, immanent," and we might do well to better render (and even feel and think through) the senses of these entanglements, or as Derrida has put it, we would do well to "complicate, thicken, delinearize, fold, and divide the line [or "abyssal rupture," that marks off "human" from "animal"--and it is a real line, or border, or abyssal rupture, after all--there is always difference] precisely by making it increase and multiply" ["The Animal That Therefore I Am (More to Follow)," Critical Inquiry 28 (2002): p. 398].

I ran across the illustration above while perusing images in a wonderful online repository of illuminated manuscripts held at the Koninklijke Bibliotheek and Museum Meermano-Westreenianum at The Hague. It is part of an illustrated manuscript copy of Augustine's City of God (c. 1475), and I'm not sure which section of Augustine's book this image is supposed to accompany as I was not able to upload the entire page [in order to read the text below the image], but I was struck by its representation of humans [Adam and Eve] and animals emerging from the earth at the same time. As some of you may know, one of the most influential texts within critical animal studies [and which Karl drew upon in his talk and which I cite above] is Derrida's essay, "The Animal that Therefore I Am (More to Follow)," where Derrida makes much of the fact [and ethico-philosophical stakes raised by it] that, in Genesis, humans follow the animal [are created afterward and therefore "come after"/"follow" the animal whom the humans nevertheless "name," prior to the fall/"original sin": "before all ills," without shame], and how then should we, do we "follow after" the animal [which means to both consider how the category of the human is constituted partly in the naming of the animal whom we follow, but also to ask how we might now begin to track/trace/follow a new auto-biography in which the "I" becomes a problem to follow/track]? I like this image from the manuscript in The Hague because it ahistorically [or atheologico-historically--whathaveyou] represents animals and humans emerging together and from the world itself, where all [humans, animals, trees, world] can be seen, again together, as entangled with each other, and therefore, for me, it really exemplifies the spirit of Karl's talk.
Posted by Eileen Joy at 5:50 PM

Interesting (to me anyhow) that the things that we KNOW emerge from the ground-the trees, plants, etc aer not represented as emerging in the illumination.