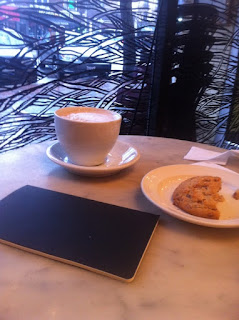 Last Thursday I had the pleasure of visiting Northwestern University for the first time, where my talk was sponsored by its lively Medieval Colloquium.

The day began inauspiciously when upon arrival at DCA I saw that my flight had been cancelled. At the ticket counter I learned I'd been reassigned to a new flight that would have enabled me to arrive just as my paper was likely to start (and Evanston is about an hour from O'Hare). Making a sad face worked some magic, though, and suddenly a seat opened on a plane about to depart. This one was so delayed, and I ended up arriving in Chicago at exactly the same time as my canceled flight would have touched down. Clearly the aviation gods possess a will that no mortal may defy.

As a result of my sudden change in plans, I received the unexpected bonus of a coveted middle seat. During the beverage service, the man seated beside me was the unlucky recipient of a spilled cup of coffee. His good cheer at the episode surprised me: when he was offered a damage report to fill out in order to claim the expense of his ruined shirt, he waived the paper away, stating that he'd paid only a few dollars for it at a thrift store. He and I struck up a conversation in which I learned that he was returning to Tillamook, Oregon, from his first trip to DC. He'd spent the week pleading with congress not to cut as part of the budget negotiation a program he'd set up in which those who relied upon the food pantry he runs can also take classes at the state university to receive some job training and break out of a cycle of poverty that he previously saw few escaping. Programs like this are what was sacrificed in the deal -- or to put it more bluntly, what was sacrificed was the future of many young people with little wealth and now even fewer prospects.

I enjoyed my time at Northwestern very much. The group that assembles at these meetings in refreshingly interdisciplinary. The graduate students possess a lively sense of community across departments. They ask terrific questions and work on ambitious projects. The faculty cultivate them without fostering the needless competitiveness that soured my own experience of graduate school.

The picture above is my breakfast on Friday at the Unicorn Cafe: café au lait, a scone, and some ruminations in my new notebook. I spent a quiet, lonely, perfect hour there.
Posted by Jeffrey Cohen at 2:41 PM

Sadly I was not at home during your visit, else I'd have come up and taken you to breakfast down the street for some authentic southern cooking in Evanston. And gone to hear your talk....