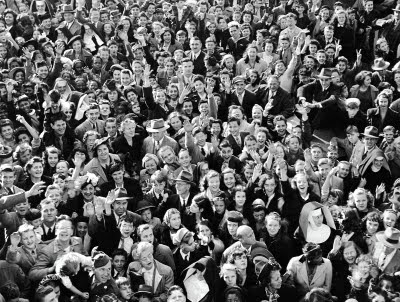 Myra Seaman, Jen Boyle, Martin Foys, and I are thrilled to announce postmedieval's first experiment with CROWD REVIEW: this will be an open, weblog-based review of essays selected for our Becoming-Media issue, co-edited by Jen and Martin, to begin in about two weeks at our crowd review site HERE. As Jen and Martin write in their Vision Statement,

First and foremost, the system for Becoming-Media’s crowd review is “webby.” At a recent THATCamp “un-conference,” an open-format gathering of scholars, students, librarians, and public intellectuals invested in a thoughtful integration of the humanities and technology, the comment was made that some of the recent experiments in open peer review had perhaps inadvertently reproduced aspects of the insularity associated with traditional blind review. That is, some of the interfaces and online environments meant to facilitate a more open review process were structurally isolating: the pre-emptive granularity of paragraph-by-paragraph interfaces for commenting on individual essays; a general platform for the review process that structurally dictates the taxonomy of importance to various approaches to commenting on the texts.

What difference might a simpler interface make? What if scholarly crowd review had the look and feel of the webby blogs that academics and academic institutions have begun to become accustomed to? The interface for Becoming-Media’s crowd review is designed to work very much like a blog, and to allow commentators to generate emergent threads of commentary on parts of an essay, or even an entire essay, with emphasis and focus of their choosing.

The webby system has implications beyond the technical elements of the interface. In a recent PMLA forum, David Theo Goldberg contributes his thoughts on the larger implications of web-based environments in re-structuring intellectual, social, and religious affiliations (“Praise the Web,” PMLA, Vol. 126, No. 2, March 2011). Goldberg goes so far as to position the influence of the web as a force that re-distributes the “practices,” experiences,” and “processes” of communities of “truth” (drawing on Foucault’s earlier explorations of these terms) (448). While some might find Goldberg’s inclusion of “webbies” alongside the tags of “ancients” and “moderns” a bit hyperbolic or even reductive, he draws forward a significant and compelling re-focus that is at the center of both the technical experimentations and conceptual under-girding of this issue on Becoming-Media — temporalities.

As Goldberg points out, what draws together the long-standing academic quarrels over “ancient” and “modern” stances toward scholarly method (either referenced historically as the early modern debate over learning based in imitating the models of antiquity versus knowledge production that took up the challenges of contemporary political and cultural forces; or more recent invocations as a metaphor in contestations over the merits of the “old” and “new” humanities) is their reliance on the importance of a discrete “time” or “period” that signals change, that remediates what has come before. In the case of “webbies,” by contrast, there is an emphasis on a relational re-forming. This is not to say that such an emphasis is not historical; certainly, this issue is all about the “new” in new media being brought into contact with the deep textures of historical reading. But it is to say that the re-forming tendencies of “webbies” (webby nodes and interstices; their dispersal and distributedness) call forth formal events as “lines of connectivity” (past, present, and future) more so than as singular “time[s] of being” (452). In this sense, the crowd review for this issue is intricately inter-woven with the question of emergence. Rather than expending energies dictating structures that reassuringly mimic the features of traditional blind peer review, we offer an open “webby” in-time editorial process that we hope will lead to some interesting reflections on “webbies” as a historical, scholarly, editorial, intellectual, and social emergence.

Why not invite a crowd? The concepts and frames of webby/webbies are likely to produce some anxiety. The “web” has become somewhat of a pejorative among some professionals, evocative as it is of the crowd on the street and “average” Joes and Janes. The concept of the crowd to some might seem particularly inimical to academic institutions or professionalism. Crowds imply mobs. Crowds imply amateur opinion, cajoling, and yelling. But crowds also now connect with activities like “crowdsourcing,” an open call for collaboration among a large group of informed participants interested in exploring, creating, or solving. And crowds also change things. The crowd potentially embodies an exciting challenge to the isolation and insularity of traditional academic organizations, as an opportunity to experiment with the re-structuring of professional and disciplinary affiliation.

For our part, we offer this invitation to Becoming-Media’s crowd review in the spirit of experimentation rather than expectation.

This issue features essays-in-progress by Seeta Chaganti, Eddie Christie, Arne Flaten, Julia Reinhard Lupton, Eugene Thacker, and Whitney Trettien, and it is my great hope that our readers here at In The Middle and elsewhere will participate in the crowd review of this issue. You are invited, furthermore, to participate in whatever manner suits you: commenting on just one or several of the papers or even on just one or several portions of a paper, and so on and so forth. To find out everything you need to know to participate with us in this experiment, go HERE.

Cheers to everyone.
Posted by Eileen Joy at 9:00 AM

I think this is potentially a great idea, but I for one would be happy if the authors could present their papers per video -- for example in ten-minute increments on YouTube -- and if then the commentators were enabled to post images, documents and links to your crowd review website. One needs to personalize this process, otherwise I'm afraid it's just more stuff to read.

I also propose herewith an online postmedieval flash mobbing event, for example we all show up at the Piazza della Signoria in Florence on May 23, 1498 and report our impressions as we watch Savonarola go up in flames. The date and place could be announced 24 hours in advance.

James: thanks for the suggestions regarding the crowd review--I actually like the idea of commentators being able to post images, documents, and the like. As this is being presented in weblog form, there will be quite a bit of latitude for posting links.