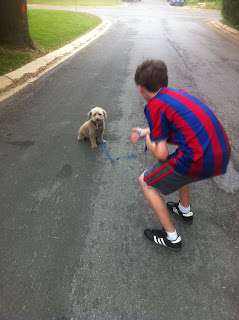 If you read my comment on Karl's recent post on behalf of Brantley Bryant, Request for the Saturnine, you'll see I've listed the many ITM posts I've composed under the influence of a low mood. Although a funk might catch me at any time, I seem to be especially susceptible during transitions, especially as the hectic pace of the semester yields to the quiet of winter break or summer. Because of the fellowship support I have for next year, followed by a likely semester of sabbatical leave, I'm looking at 18 months of teaching and administrative release -- an amazing gift, and one for which I'm profoundly grateful, but this time without structure scares me a bit as well. That's one reason I've decided to remain director of MEMSI during at least some of this time.

Strangely, though, this year the summer funk has yet to capture me, at least for very long. Partly I think that's because I've been busy. I have commitments to make good on, including numerous essays. I also had an idea for an edited volume that went from a small seed to a sturdy sapling in the course of a very few weeks. Prismatic Ecologies: Ecotheory Beyond Green now has a twelve person table of contents (and what a ToC it is!), with two more commitments likely. I'm enamored of the project so that has been energizing. I hope to post more about the book within the next two weeks or so.

There have also been some important family events. Alex graduated middle school and is getting ready to depart for two weeks of camp in West Virginia. Katherine completed first grade, and also injured her knee badly, so that she has required some extra care and doctors' visits.

And we have a dog in the house. We've been watching our friends' mutt Cooper. It didn't take him long to become attached to us. He stays by my side as I write just as Scooby once did. He's the only one in the house who can stand to listen to me practice guitar. He helps me to feel like I'm not alone even when I'm solo. It will be difficult to give him back to his family next week. In fact -- as I posted on Facebook -- I am sabotaging that transition by teaching him to bite the ankle of the nearest person whenever he hears "brave Hund!" (his family speaks German). He will soon know that if anyone should declare "Prost!" he must leap for their beverage and knock it from their hand. Finally, should anyone say "Schadenfreude," I will teach him to bite their ankle and smile at their pain.

So, screw Saturn, god of morose academics. I'm too busy re-training a good dog to go bad.
Posted by Jeffrey Cohen at 7:34 AM

So sorry to hear about Katherine's injury - clearly the end of first grade is a treacherous time! All of our thoughts here for her recovery. Having learned from Mandeville that Saturn is plodding and slow, I'm out-running Him with a road trip to the American South. Thanks to said Mandeville's most recent travel post via Chaucer, I now also know to avoid the Honey Badger!

Luckily KEC is making a speedy recovery. Nothing slows her down for long. And I've been enjoying the narration of your own road trip, Anne!