My objective for this week was to have my "Abecedarium for the Elements" complete in draft. FAIL. The piece is in better shape than previously, mainly because of the revelation I had while composing this post. I'm not trying to squeeze the thoughts of June into rubrics developed last September. But the essay isn't quite cohering, and I regret my ambition in thinking I could pull this thing off. I'll get there, I suppose, and I thank all of you who commented for helping me along the way. 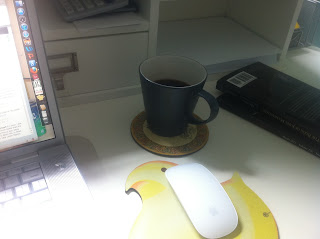 Today, though, I'm tired. The proof is the cup of coffee you can see in the picture of my desk to your right. I never drink coffee in the afternoon, mainly because if I do it too often I become tired on the afternoons when I do not. I don't like a pleasure becoming a necessity. It's been an intense few weeks. I have been working on the postmedieval issue and attempting to keep the email monster from growing (it feeds upon inattention, and can double in size if you look away). I've also seen my Prismatic Ecologies: Ecocriticism Beyond Green volume go from an inkling that would not leave me in peace to an enfleshed idea that I've pitched to a press I'm eager to work with again. The table of contents now includes Will Stockton (pink), Vin Nardizzi  (greener), Steve Mentz (brown), Jen Hill (grey), Julian Yates (orange), Eileen Joy (blue), Levi Bryant (black), Stacy Alaimo (yellow), and Graham Harman (gold). More coming, too.

My tiredness may also derive from my late bedtime and early rising. I went to a concert last night. Mumford and Sons played an outdoor venue just north of the city in Columbia, MD. Since everyone in my family likes their album, I'm fairly intimate with their songs. I knew they would be good live, but was taken by surprise at just how good they are. Not only do each of the four band members play almost every stringed instrument imaginable (and the lead singer is quite a drummer as well), they reinvented their music as often as they straightforwardly performed it. My favorite was "Thistle and Weeds," a song that is OK (maybe a little boring, really), but last night became a prog rock piece straight out of 1970s Genesis, with a lush soundscape that weirdly echoed the massive storms moving through the area. Perfect. Last night left me refreshed, not only for the unremitting good cheer the performers brought to the songs, but their joy in tampering with their own compositions, and their dedication to making the concert feel intimate. No one plays bluegrass inflected folk like the English ... and hey, I can write the event off as a scholarly trip since the opening line of the concert's first song, the resonant and beautiful "Sigh No More," is stolen from Much Ado About Nothing ("Serve God love me and mend," quoth Benedick).
Posted by Jeffrey Cohen at 1:42 PM