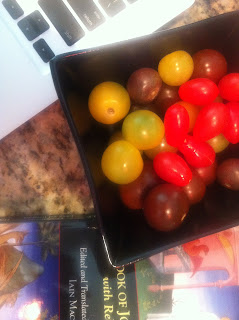 Related to this post, working on the New Critical Modes issue of postmedieval brought me back to an ancient ITM conversation. Here are some words I wrote two years ago (in the comments) that make me realize that I'm either a broken record or keep encountering the same tangle of professional and personal challenges:


I sometimes write to no specific interlocutor or for an audience that cannot be imagined fully in advance. I write -- in a way -- to the works themselves. I love what I do, and feel fortunate indeed to have a life that gives me easy access to paper and pens or a laptop and the internet.

I need to write as much as I need to read and to eat.

So sometimes that futurity we've been talking about -- the new critical mode that "we do not yet know how to read" -- begins in relative solitude, in a study, or by one of the Finger Lakes, or by the sea. Unless what is being composed is a diary, writing never stays in place very long: even if the first audience is oneself, every text also has an inbuilt community (and therein an inbuilt futurity). It's just that some texts are inherently open, welcoming: they yearn for capacious interaction. Others are more difficult, even diffident: they demand more of those who want to embrace them, be changed by them. We all know, too, that it is often the texts at which we labor hardest to which we bond most intensely. Difficulty has affective power.

I believe in risking heartbreak and failure. I wouldn't want a life without those companions, and I believe that if some of the writing we attempt isn't completely miscalculated and a big embarrassing flop, we did something wrong, we played too safely. Nicola cited that great passage from Don Qixote: sometimes you leap into the mud and find an Other World on the far side. Sometimes you just get kind of messy and have to go home and shower it off.

Or take a swim in an ocean, one of the Finger Lakes, a salt bed, the Gravelly Sea.

Rediscovering that comment and the conversation in which it participated has been especially auspicious today. Somehow I've moved out of the Slough of Despond that my latest writing project was miring me within. The comments on my last post have also assisted me in approaching my abecedarium for the elements (why the hell am I writing an abecedarium?) with fresh energy. It's not such an albatross any more, because I realize that it -- like the elements it details -- requires the freedom to live, breathe, and change. I don't know who I'm writing it for, but that uncertainty brings with it a liberty.

Bravo! You've made it further than Mr Ramsey, at least, who could never quite get to R.

Hope all the house is as ok as they can be.

"The best literature is always a take [in the musical sense]; there is an implicit risk in its execution, a margin of danger that is the pleasure of the flight, of the love, carrying with it a tangible loss but also a total engagement that, on another level, lends the theater its unparalleled imperfection faced with the perfection of film.

I don’t want to write anything but takes."

Too often I find myself in the situation where a piece of writing (at this point, usually just a concept for my upcoming dissertation or for an article) is either still too fragile to be shared (lest the pruning of even judicious criticism destroy any life within), or so well-tended by me alone that a certain jealousy and fear take over -- I do not want to share it because if it is shred to pieces too much of me goes along with it. I think I need some form of beautiful collaborative-writing, such as you, Karl, Eileen and Mary have here; it seems unhealthy for an amateur gardener to also be lonely.

Thanks for the beautiful and apt metaphors for this process; viewing it as the possible staging of an encounter with an alternative world is exciting and inspiring.