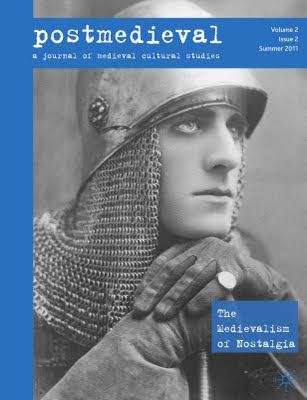 But aren’t there ways of thinking about nostalgia that are less suspicious of the effects of desire or longing on our critical capacities? That don’t implicitly assume a narrative of psychological health that puts yearning and loss at the wrong end? That don’t automatically separate the political from the personal and associate it with a forward-moving progress that leaves the past in the dust? That might revalue aesthetic projects that incorporate longing as well as distance, shallowness and depth? I’d like to gesture here toward the possibility of thinking about nostalgia differently; I’d like to hazard the possibility of a critical nostalgia . . . .
--Carolyn Dinshaw, "Nostalgia On My Mind"

It is with great pleasure that Myra Seaman and I announce the publication of Vol. 2, Issue 2 of postmedieval, "The Medievalism of Nostalgia," a special issue co-edited by Helen Dell, Louise D'Arcens, and Andrew Lynch, with essays by Helen, Louise, Andrew, Melinda Graefe, Linda Austin, and Geraldine Barnes, and also featuring a book review essay by Carolyn Dinshaw, "Nostalgia On My Mind." You can see the full Table of Contents here:

The Medievalism of Nostalgia

The issue also features a response essay, "Nostalgia and Its Discontents," by Renée R. Trilling, and it pleases me to no end to also share that just last week, Renée was awarded the biennial Best First Book Prize from the International Society of Anglo-Saxonists for her book The Aesthetics of Nostalgia: Historical Representation in Old English Verse (Toronto, 2009).

Louise D'Arcens located the cover image, which we think is smashing, in the archives of the National Library of Australia, and you can read more about that HERE. Vive la postmedieval (or something like that)!

And don't forget: members of the BABEL Working Group get a discounted rate on individual print subscriptions to the journal!

Wonderful choice of the subject matter: had I known of the symposium earlier, I wouldn't have struggled with my own work that hard!