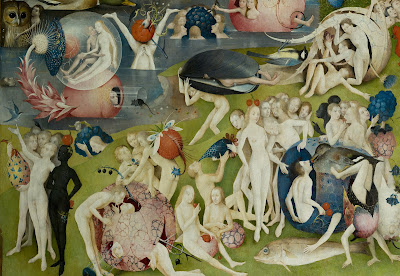 What the Speculative Medievalisms project desires . . . is fruitful dialogue and creative, mutual cross-contamination between medieval ideas of speculatio, the cultural-historical position of the medieval as site of humanistic speculation, and the speculative realists’ “opening up” of “weird worlds” heretofore believed impenetrable by philosophy—as Graham Harman has written, “the specific psychic reality of earthworms, dust, armies, chalk, and stone.” . . . the wonderful (and ironic) thing about speculative realism’s humanistic allure, its attraction to persons who are not so concerned about constructing definitive arguments about the nature of reality, is that speculating about the nature of reality with “the text-centered hermeneutic models of the past” is not a bad description of what “we medievalists” do. In short, there is between medieval studies and speculative realism something like the space of a compelling, magnetized shared blindness that might be realized as love at first sight. The gap concerns the age-old problem of the boundary between poetry and philosophy, meaning and truth—in short, the reality of the image in the mirror of thought. A speculative medievalism, which could proceed from the insight that the desire for a thought that can think beyond itself is precisely the problematic explored in medieval theories of love (whence Andreas Capellanus’s famous definition of love as immoderata cogitatio, immoderate contemplation). In other words, speculation might be a mode of love, which then might also be imagined as comprising forms of intellectual work with medieval texts and objects that would work to (re)awaken the discipline of philosophy to the reality of love (philia).

--The Petropunk Collective,* from the precis for the Speculative Medievalisms project

I am pleased to announce that we now have our final line-up and program for our second Speculative Medievalisms event [check out the first one, held at King's College London last January HERE], to be held at The Segal Theater, The Graduate Center, CUNY on Friday, September 16th, and featuring talks and responses by Graham Harman, Jeffrey Cohen, Kellie Robertson, Julian Yates, Drew Daniel, Ben Woodard, Liza Blake, Anna Klosowska, Allan Mitchell, and Patricia Clough. Details on the program and registering to attend in advance are here:

Pre-registering is quite simple and we're encouraging it, as seats are limited. Basically, as you will see when you follow the link above, you merely send an email, detailing your name, institutional affiliation, and your desire to attend here:

If you are affiliated with any of the CUNY schools, either as a faculty member or student, attendance is free [but we still need to know in advance if you plan to attend]. We're asking everyone else to make a donation to the BABEL Working Group of $25.00, which helps us to defray the costs of funding the travel of some of the featured speakers. We hope to see you in New York City in September!

Speculum, this mirror to which we find it appropriate to give a Latin name, suggests the multitudinous mirrors in which people of the Middle Ages liked to gaze at themselves and other folk—mirrors of history and doctrine and morals, mirrors of princes and lovers and fools. We intend no conscious follies, but we recognize satire, humor and the joy of life as part of our aim. Art and beauty and poetry are a portion of our medieval heritage. Our contribution to the knowledge of those times must be scholarly, first of all, but scholarship must be arrayed, so far as possible, in a pleasing form.
--E.K. Rand, inaugural issue of Speculum (1926)
Posted by Eileen Joy at 1:40 PM

Maybe I should begin to write my paper, considering this might really happen?

It's only speculative--personally, I am going to just wait and see.