Karl Steel, How to Make a Human 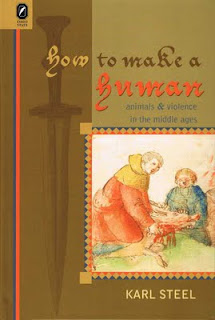 Among the many items on yesterday's desk is one that deserves special mention here at ITM, Karl Steel's book How to Make a Human: Animals and Violence in the Middle Ages. Karl's monograph is now in print via Ohio State University Press in their remarkable new series Interventions: New Studies in Medieval Culture (ed. Ethan Knapp). Although not instantly downloadable, the beautifully produced volume is a bargain in electronic form at $9.95 for the CD. The cloth version is $49.95: while steep, still 50% less than what many academic presses charge for their hardbounds.

The GW Medieval and Early Modern Studies Institute will be celebrating How to Make a Human with a symposium on Thursday, Dec 1. Look for more details here and on the MEMSI blog and Facebook page (please consider liking that page if you are on Facebook), but I can tell you now that our four speakers are Karl Steel, Julian Yates,Peggy McCracken and Tobias Menely.

In the meantime, buy the book! Read the book! I've had the pleasure of enjoying the whole thing twice, and I can tell you that the following blurbs from Peggy McCracken and that ubiquitous Cohen chap are 100% truth:


“In How to Make a Human, Karl Steel uses a series of beautifully articulated readings to argue that a foundational violence against animals that defines the human is pervasively at play in medieval texts. Medieval texts define the human through violence against animals, he argues: violence secures human mastery through the submission of the animal and identifies the human as grievable, in opposition to the animal that is not. Steel moves confidently among many different primary and secondary texts and traditions, and he writes about them with remarkable clarity. The research is inventive and extensive, the examples are varied and rich and often surprising, and the analysis is based on often brilliantly insightful close readings. This book is a pleasure to read.“ —Peggy McCracken, University of Michigan

“Compared to work that has already appeared on animals, How to Make a Human is more astute when it comes to theory, more careful when it comes to close reading of evidence, more eloquent in its argument, more forceful, more audacious, and more beautiful. Karl Steel is a creative thinker whose approach is fresh, unorthodox, and groundbreaking. This is an astonishing work of scholarship.” —Jeffrey J. Cohen, George Washington University

You may comment on the book at the OSU Press blog and access a substantial PDF of excerpts at the press website (top of the lefthand column).

It really is quite an achievement. CONGRATULATIONS KARL.
Posted by Jeffrey Cohen at 10:35 AM

thanks folks! Miriamne: you'll be pleased to know that one of my MA students (who's doing a reading of Cleanness through, basically, Rabbinic exegesis) just praised your book highly.

Thanks for this news, Karl (and the little marketing too). I like thinking that a little part of me--a thing which lives and breathes independent of its author in Brooklyn, NY--is garnering praise.

Congratulations, Karl, given your musings on the subject here this sounds like a must-read.