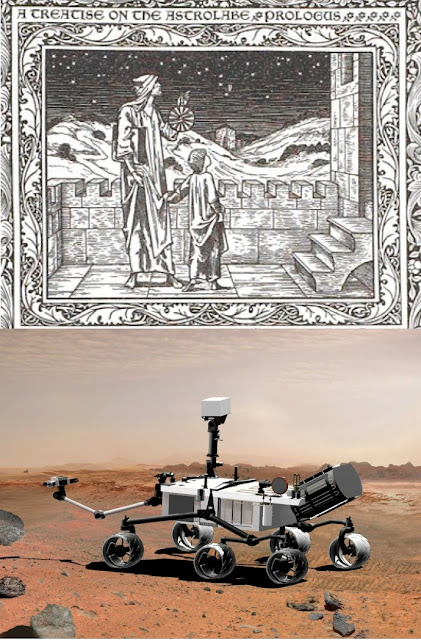 ABOVE: Chaucer's A Treatise on the Astrolabe, which the Oxford English Dictionary cites as providing one of the first attestations of "curiosité" in English. From the Kelmscott Chaucer (William Morris, 1864), illus. Edward Burne-Jones. BELOW: NASA's "Curiosity" Rover, on Mars. [My mashup of images from here and here (see entry dated 09.16.10).]

The fact that there's a NASA robotic rover traversing Mars -- and that it bears the name "Curiosity" -- makes me, well, more than a little bit curious to follow the story (and the pop culture tangents, memes, and obsessions it generates). I marvel at the awesomeness of the scientists who helped launch, direct, and land this rover  -- including that one Mission Control staffer with the rockin' star-themed mohawk. It's also quite fun to track the trajectories of the very cleverly personified "Curiosity" on twitter, who tweets photos and sporadic bursts of narrative in an engaging first-person voice (see the MarsCuriosity twitter feed). [1] I happen to find all this buzz so distractingly exciting, and given the current media obsession over this Martian rover it seems quite fitting that NASA settled on the name "Curiosity" for this mission. While previously launched NASA rovers were given names like "Spirit" and "Opportunity" -- abstract nouns that transform scientific missions into allegories of human triumph and ingenuity -- "Curiosity" carries a qualitatively different type of emotional impact, suggesting not so much grandiose ideals as pleasure and interest in the new. In my mind, this name "Curiosity" suggests that a scientific mission with clear objectives and measurable outcomes is ultimately grounded in -- and continues to generate -- an unmeasurable sense of wonder and enthusiasm. Rather than implying idle pursuits, the name "Curiosity" encapsulates something much more profound: it suggests the creative potential of our communal and unending fascination with "the new."

The name of the rover also makes me -- a true Chaucerian at heart -- want to reflect for a moment upon one of the earliest appearances of the word "curiosité" in English: in particular, its usage at the final few lines (envoy) of Chaucer's so-called "Complaint of Venus." [2] In this work, the poet masterfully adapts a French lyric by Oton de Graunson and he ends with this claim (tongue in cheek of course): "Syth rym in Englissh hath such skarsete" Chaucer can barely manage to "folow word by word the curiosité / Of Graunson, flour of hem that make in Fraunce" (80-82). In this post -- mostly as a thought experiment -- I'd like to consider these (related) questions: 1. What exactly does "curiosité" mean for Chaucer at this moment in the poem? and 2. How might a medieval understanding of the word "curiosité" change how we understand the poet, or (more broadly) how we think about the art and science of translation?

The term "curiosité," first of all, needs a bit of unpacking, as its meaning and usage have shifted considerably over time. In Middle English as well as in its modern usage, the word can connote a general sense of "inquisitiveness" -- and in a medieval spiritual sense of excessive interest in worldly things, it could (in some contexts) be used pejoratively. [3] But to medieval people - as the Middle English Dictionary citation of this very line from Chaucer indicates - "curiosité" could also entail an aesthetic quality as well: a sense of "skilled or clever workmanship, elegance (of workmanship), beauty (of a work of art)" - see quotations listed in def. 1(b). [4] A related sense of the word suggests an attention to detail: the Oxford English Dictionary's first attestation of "curiosité" as a personality trait, i.e. "careful attention to detail; scrupulousness; exactness, accuracy," comes (curiously enough) from Chaucer's masterpiece of translation-and-technical-writing, A Treatise on the Astrolabe: "To knowe the degree of the sonne by thy diet, for a maner curiosite" [Cambr. Dd.3.53] (def. I.2). Technical precision is indeed a virtue that nicely informs both the work of medieval poets as well as NASA scientists. In glancing through these MED and OED definitions, I wonder if these different senses of the word "curiosité" are really as disparate as they might appear. My sense is that Chaucer's "curiosité" implies poetic translation requires not only a skilled attention to detail but also a roving desire, pleasure, and joy in non goal-oriented exploration. [5]

Mobilizing and instilling curiosity is something that many of us hope to do as teachers. In my undergraduate Chaucer course, I always starts with a judicious sampling of his lyrics, a dream vision or two, selected Canterbury Tales, and ends with some prose works (including the Treatise on the Astrolabe -- yes! Chaucer and his son Lewis were very curious about the cosmos!). In this progression, the "Complaint of Venus" appears very early on -- and I feel it's a good starting point as any for thinking about how an English Chaucer positions himself his relationship to French (Continental) peers. What I always try get students interested in (some times more successfully than others!) is all the extra stuff that Chaucer does with the French text that exceeds any "mere" translation of source material. Most conspicuously: Graunson's verses praise a woman; the corresponding Chaucerian lines praise a man. Here's Graunson: "Il a en lui beauté, bonté, et grace / Plus que nulz homs ne saroit deviser ... Onques ne vy si plaisant jeune dame / De toutes gens avoir si noble fame ..." [There is in her beauty, goodness, and grace / More than any man could devise ... Never have I seen such a happy young lady / To have such a noble name from all people] (9-10, 14-15). And here's Chaucer: "In him is bounte, wysdom, governaunce, / Wel more than any mannes wit can geese ... Thereto so wel hath formed him Nature / That I am his for ever, I him assure" (9-10, 14-15) [6] I usually ask my students something along these lines: What is Chaucer "up to" in changing the gender framework in his translation?

Chaucer's gender-bending gambit here usually opens up to some sort of discussion (in my experience anyway) of how an artist creates (or inhabits) a "new" voice through poetic translation. If we see Chaucer scripting the first-person lyric speaker as a woman, then what's happening is something along the lines of "I'm imagining a new life for this poem in English by also imagining I'm a woman." I'd say Chaucer effectively re-orients the geospatial coordinates of this poem through this re-gendering topos. To put it another way, Chaucer enacts a lyric trope (turn, twist, device) -- and when the rhyme-word "curiosité" appears near the end of the envoy, these lines re-route the entire lyric utterance toward a new audience not in France but in England. [8] Chaucer of course is never "faithful" in his translations (any so-called "derivative" text can never be a perfect reincarnation of the "source"), and this re-routed trajectory of "Venus" shows how even the most technically precise translation -- one that adheres to the rigorous standards of rhyme, meter, and form -- can simultaneously be roving and exploratory. I'd venture to say that the envoy's invocation of "curiosité" activates the dual resonance of the word as attention to detail and expansive wandering. In the poem's transmutation of gendered positioning, the poet demonstrates that translation is never "straight," a linear path from point A to point B. If anything, poetic translation charts circuitous orbits that are awesome, beautiful, scientific, exploratory, and (shall we say?) bi-curious.

[1] If we want to push things further, could we say that the CuriosityRover twitter feed constructs an enthusiastic, episodic, and disorienting first-person account of travel - much like the work attributed to one medieval traveler, Sir John Mandeville?


[8] The idea that courtly lyric is a message "sent" to a particular audience in one place or another makes some sense given that Chaucer was not only a poet but a frequent, bi-directional Channel-crosser; in his role as a diplomatic envoy he was sent on missions to France and other locations the Continent. See Craig Bertolet, "Chaucer's Envoys and the Poet-Diplomat," The Chaucer Review 33 (1998): 66-89.

Terrific post, Jon, thank you. I too have been marveling at that beautiful choice of name, "Curiosity," for the rover myself these past few days.

Just to add on a bit to your discussion of Chaucer's translation of Granson: what's really interesting, actually, in that transposition of gender in Chaucer's translation of the poem is the very clever way in which Chaucer decides to do it. Where Granson has “Il a en lui beaulte, bonte et grace, | Plus que nulz homs ne sauroit deviser” (In her there is beauty, goodness and grace, ll. 9-10), Chaucer writes: “In him is bounte, wysdom, governaunce. | Wel more then any mannes wit can gesse” (Venus, ll. 9-10). The change in gender is crucial, it fundamentally alters the meaning of the entire poem – yet in this line Chaucer does not need to do much linguistic legwork to change Granson’s original since “lui” in French can be either masculine or feminine, either “him” or “her.” Thus, Chaucer’s line “in him is bounte, wysdom, governaunce” is actually a word by word translation of Granson demonstrating that if English has linguistic “skarsete”, then the French pronoun in this line has such a linguistic plenitude in its gender ambiguity that Chaucer can effect a major alteration even as he sticks verbatim to the original French. In this way, his translation corrals the original language of the source text and bends it to serve his purposes. It's a beautiful little piece of linguistic, quite literally gender-bending play, and it speaks a bit, I think, to the idea of translation's curiosite as a roving through linguistic possibility.

Liza, thanks for this great comment; I figured you would be able to add some more insight into this discussion! I would totally agree with everything you say here, particularly your point re: the ambi-gendered quality of the French pronoun "lui" - it really does serve as Chaucer's key "pivot point" in this translation.

Terrific first post, Jonathan. You've helped me also to identify something I find fascinating about the Curiosity phenomenon -- not so much that it anthropomorphizes a cold machine on a cold planet through a twitter steam full of emotion and "personal" experience (I think that's a given; it's hard to have an ardent audience without empathic buy-in), but the juvenilization of the Curiosity. Chaucer and his son Lewis beholding the stars together aligns curiosity with child like wonder -- and that's why I like your definition "pleasure and interest in the new." Likewise, the "voice" of the Curiosity rover is a child-like voice, full of excitement at Martian novelty. AND: have you noticed the proliferation of fan art that shows Mohawk man as a wonderstruck child -- so sweet and innocent and, really, demasculinized. He is a boy full of wonder not a man with stubble and flamboyant haircut guiding a precise machine -- not (in these juvenilizing pictures) a heart throb or a role model but a curious unbearbly cute little tyke. What is at stake in that de-gendering? Is science different when it inhabits a child's body rather than (as we are more used to) a stereotyped masculine one?

Thanks for that, Jeffrey! Yes, you're identifying an important aspect of this I hadn't quite articulated: that the buzz around "Curiosity" is all about inhabiting a childlike state of wonder and enthusiasm - rather than a detached view of extra-planetary inquiry (something stereotyped or socially "coded" as adult, masculine, objective). Your comment is already reshaping my own understanding of the "Lewis" humility topos in the "Astrolabe" treatise! It's not so much that the address to Lewis is a paternal posture where the Chaucer-translator transmits old scientific knowledge *to* a young child, but it might actually be more about adopting a *childlike orientation* toward learning itself.