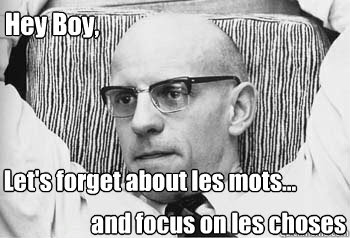 Last December, I shared here at ITM a preview of an advanced graduate seminar on the "late Foucault" that Anna Klosowska and I had proposed to the Center for Renaissance Studies at the Newberry Library, and I am happy to report that that seminar was approved and will be running at the Newberry Library in Chicago every Friday afternoon from January 11 to March 15, 2013. The course is available for registration HERE, and if you are a student at an institution that is a member of the Center's consortium, tuition is free and there is even travel funding available.

We are really excited about this course as it interrogates materials in Old English, Middle English, and medieval and early modern French, in direct relation to seminars, lectures, and interviews of Foucault's that were related to his plans for an unfinished fourth volume of his History of Sexuality. As such, the students will be reading seminars and lectures Foucault gave late in his life in Vermont, Berkeley, and at the Collège de France, as well as interviews in which he sketched out his most current and still-developing (and tragically never completed) thinking on ascesis, subjectivity, sexuality, friendship and what he called "an improbable manner of being," which serves as the touchstone phrase for the entire course. The primary texts will include the Old English lives of Mary of Egypt and Martin, Bishop and Confessor; Felix's Anglo-Latin Life of St Guthlac, the Old English Andreas, Chaucer's Man of Law's Tale, the Lais of Marie de France, and the queer poetry of Renissance figure Madeline de l'Aubespine. We will also be undertaking readings in classical, medieval, early modern, and contemporary queer/sexuality studies: Lauren Berlant, Leo Bersani, James Bromley, Virginia Burris, David Halperin, Robert Mills, and Marc Schachter, and Lauren Berlant herself [herself!] will be visiting the seminar on the last day to discuss the future of desire & love in America.  Other guest speakers already confirmed and to-be-invited include: James Bromley, Laurie Finke, David Halperin, Peggy McCracken, Eric Ruckh, and Carl Springer.

I will share here our most recent version of the seminar's Syllabus, for those in the Chicago area [or not too far away] who might be interested in enrolling in the course: